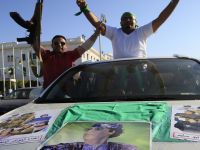 The NATO approach to freedom of expression is threatening independent journalists, closing social network accounts, blocking Twitter and hacking into websites. For some reason it must be. Despite these Fascist policies, those who have felt millions of people gathering around us, desperate for information, have a duty to say what is going on.

For all of those who have been contacting me daily, asking for new information, desperate to hear some news in the midst of NATO's media blackout and lies about how the "Gaddafy regime collapsed", in first place, God Bless you and in second place, indeed you represent the hearts and minds of the international community. Of that I have no doubt. From Manila to Moscow, Russia, where according to a recent poll 91% of the population supports Muammar al-Qathafi, from Sydney to Strasbourg, from Brasilia to Bangkok.

For all these good people, who respect international law and who abhor NATO's act of butchery followed by thieving of a sovereign nation's resources, even before the fight is over, who abhor NATO's supporting of Al-Qaeda elements and backing of racist thugs who slaughtered Negroes in the streets, here is what I have.

It is impossible for me to sit at my keyboard outside Libya and declare that I am the guardian of the truth. Indeed, I have very rarely written anything other than opinion-editorial pieces on Libya because I do not have my eyes on the ground. The eyes on the ground I have used are independent journalists, who have now been silenced, and eye witnesses inside Libya.

These are either people I already knew there, after working for years in media covering Africa (I was a partner and international director of a media group covering the continent and built up many contacts and continue to be active in several Pan African projects) or else those I have contacted through the Internet, with families in Libya or those supposedly in Libya themselves. With the Internet you never know. Who appears to be perfectly credible could be some punk in a basement apartment in New York, or the girl next door having some fun. The secret is to filter and vet those who claim to be who and what they are...in this case, filter number one, do they speak Arabic? If not, thank you and bye bye. Filter two, what is their e-mail address? If it is anything connected with Libya, then my interest is aroused.

What we have to do is to respect all sources, treat them all as possibly credible but then confront what they say with the information we are receiving. Unfortunately, the western media has been a disgrace, so much so that I have cancelled SKY, BBC, CNN and Al-Jazeera from my cable package because they might manipulate the truth and dupe themselves but they cannot call the international community stupid.

We all know very well what happened, and even before they tried it on, we were all informed about the "alternative Tripoli" built in Qatar and filmed there (some say India) and we have all seen the discrepancies between the different "Tripolis" we were shown.

I am not a dream seller. I know very well if I declared that Colonel Gaddafi's forces had routed NATO and defeated the terrorists who ran amok in the Libyan capital beheading people in the streets, raping women and girls, torching buildings and looting (many of them foreigners) there would be a collective cheer so loud I would hear it from where I sit.

What I can say is the following. NATO's media blackout, why? What are they afraid of? Why have independent journalists been threatened? Why have their social network accounts been hacked and closed and why have their Twitter accounts been blocked? As usual, we are dealing with pith-headed simpletons because obviously these days anyone who has a social network account has already informed the members of emails and alternative means of contact.

Secondly, if NATO's campaign was going so well, then why are there thousands of mercenaries in Tripoli, from British to French to Germans to Qataris? Why is NATO arming the "rebels"? Why is NATO putting boots on the ground? Why is NATO bombing Libyan Armed Forces positions? Obviously it is not going well, because NATO has been unable to fight the fight using the original laws covering the conflict and adhering to the rules of engagement.

It is like a boxing match where one fighter, when losing, pulls a gun and shoots his opponent. Is that called winning?

Thirdly, in the absence of media reports due to NATO's democratic blackout (freedom of expression, eh what?) what I can say categorically is that in Tripoli massacres are being perpetrated by the terrorist scourge NATO supports. This has been backed up by countless eye witnesses living inside the capital who have seen the most horrific violations of human rights - another feather in NATO's cap. This raises the question, what on Earth were Cameron and Hague, Obama and Clinton, Sarkozy and Juppe thinking when they aided and funded these fanatics?

Quite where the lines are drawn is very difficult to say with any accuracy because reporting without sources makes this impossible. What the blackout has done is to give NATO and its mercenaries and, allegedly, thousands of special forces (violation of UNSC Resolutions covering this conflict), freedom to take the capital city before the TV comes back on and we are shown the result. I am receiving reports of carpet bombing by NATO aircraft aiding the terrorists against the Government forces.

The information NATO is giving is that the city has been taken. The information from the British Foreign and Commonwealth office is that the city has not been taken. The information from the ground is that it is far from taken. Indeed, South African President Jacob Zuma declared on Friday that most of it is in the hands of the Libyan Government - and there is only one Libyan government, that of the Jamahiriya, loyal to Muammar al-Qathafi. This would explain the media blackout.

This is the situation today. Tomorrow, nobody can say. Elsewhere, the NATO/terrorists occupy part of Misratah and are blocked outside al-Brega, while NATO has taken to frenetic and savage bombing attacks against Sirte.

Whatever the outcome, and to be frank, nobody can tell what will happen if this escalates (the Libyan Armed Forces have plenty of options at their disposal should they care to use them) the fact that NATO has resorted to breaking all the rules of engagement and all the laws covering this conflict says it all. True, in the end it could carpet-nuke Tripoli and invade it with 40 armies.

But is that winning? Does the boxer win his match if he shoots his opponent? Remember, the Libyan Armed Forces have, since the beginning, been defending themselves and the civilian population from marauding gangs of terrorists, whose massacre of civilians, including pro-Gaddafi forces, gave NATO its casus belli, just like Saddam's WMD.

One final question. How will NATO explain the thousands of deaths its troops and its mercenaries are suffering? The thing is, whatever the outcome, Colonel Gaddafi's forces stood and fought back. That makes him a hero and NATO a villain, and the history book will be implacable for Messrs. Obama, Cameron and Sarkozy and the snivelling cowards who did not have the guts to stand up to them.