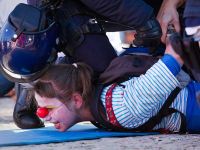 Just what exactly do you think you are doing in Libya? Did anyone elect you? Did you heed the Libyan Government's call for a democratic election? Since when is attacking civilians with US Apache helicopters in your Rules of Engagement? How do you explain the wanton strafing of civilian structures with military hardware?

Why is NATO using armed force to aid terrorist mercenaries shipped in from Egypt and Tunes against Libyan civilians?

Why did the Libyan uprising start on the frontiers and not in the capital city, Tripoli? Why is the vast majority of the capital city firmly behind Colonel Gaddafi? Why are most Libyans in other parts of the country taking a stand with the Government and against the groups of thugs you support with your military hardware?

Why do you support people who commit atrocities? Why do the people of the towns they "liberate" fight them off with guns? Why are they hated across Libya?

Why is NATO strafing civilians and civilian structures with military hardware, against Article 3 of the Statute of The Hague International Penal Court which states clearly that one criterion for indictment for war crimes is:

Another clause of the same Article 3 could also be invoked:

Why is NATO aiding terrorists which by the definition of its own member states are on the list of proscribed terrorist groups?

There is evidence that armed groups fighting inside Libya include the Libyan Islamic Fighting Group (LIFG) which according to the British Government: "The LIFG seeks to replace the current Libyan regime with a hard-line Islamic state. The group is also part of the wider global Islamist extremist movement, as inspired by Al Qa'ida. The group has mounted several operations inside Libya, including a 1996 attempt to assassinate Mu'ammar Qadhafi" and for which reason is on the Home Office list of proscribed terrorist groups (1);

Why did NATO not aid the UNSC to reach a peaceful solution to this problem, something which the Libyan Government has been trying to achieve from the beginning? Under the UN Charter, Chapter VI, Article 33, member states must "seek a solution by negotiation, enquiry, mediation, conciliation, arbitration, judicial settlement, resort to regional agencies or arrangements, or other peaceful means of their own choice".

Did NATO do this in the case of Libya? No, it used a false flag event, namely the massacre of civilians by "rebel" forces (the allegations must be investigated).

Chapter VII, Article 51 refers to the right of States to defend themselves against armed insurgency:

"Nothing in the present Charter shall impair the inherent right of individual or collective self-defence if an armed attack occurs against a Member of the United Nations, until the Security Council has taken measures necessary to maintain international peace and security. Measures taken by Members in the exercise of this right of self-defence shall be immediately reported to the Security Council and shall not in any way affect the authority and responsibility of the Security Council under the present Charter to take at any time such action as it deems necessary in order to maintain or restore international peace and security"

in which case NATO had no reason to attack the Libyan Arab Jamahiriya.

Why is NATO continuing to arm the terrorist elements in Libya, why is NATO placing boots on the ground, why are NATO forces making raids on the Libyan coastline, why are French contingents in the western mountains, why is the French Foreign Legion involved in the fighting, why is NATO not inspecting vessels ferrying weapons to the terrorist elements, all of these in direct contradiction of the terms on UNSC Resolutions 1970 and 1973 (2011)?

Why is NATO committing war crimes in its attempts to murder individuals? Without any formal declaration of war, NATO's strikes against civilian structures come outside any possible conditions imposed by rules of engagement, in which case the armed attack against a civilian residence occasioning the murder of Muammar al-Qathafi's son Saif al-Arab al-Qathafi and three of his grandchildren would occasion a case for prosecution; furthermore other strikes against structures where Muammar al-Qathafi was alleged to have been would constitute cases for prosecution for attempted murder;

NATO does not represent the collective will of humankind, NATO is a criminal organization which commits murder and attacks civilians arming terrorists and involving itself in the internal affairs of sovereign nations, all against international law, NATO violates the UN Charter, NATO violates the UNSC Resolutions, NATO violates the Geneva Conventions. NATO therefore does not have the right to represent anybody; it is no more than the military wing of the lobbies which control the policies of its member states.

We did not vote for NATO, we do not want NATO. Either NATO listens to the collective will of humanity or else it will suffer the consequences of its actions. You can only spit in the wind for so long. No future development inside Libya will free NATO from prosecution for the crimes mentioned above and whatever development there may be, NATO will not "win" anything in this conflict. How can you "win" a game on an uneven playing field with three times as many players?

Persons to be included in legal processes for indictment: