Libya and the need for a New World Order 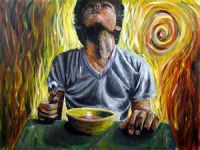 It does not make sense to say let us wait for the end of the Libya conflict to discuss where we are and where we want to go - it makes great sense to discuss it right now, for the hearts and minds of the international community are seething with rage at what our planet has so obviously become, ruled by a clique of sinister invisible corporations.

The Libya conflict is wrong. It was launched under UNSC Resolution 1973 (2011) after the previous UNSC Resolution 1970 (2011), both of these being based on false flag events - lies that thousands of civilians had been slaughtered by the forces of the Libyan Government.

What happened next demonstrates, at best, the naivety with which humanity reacts and at worst - and I tend to fear this is the case - the horrific and sinister nightmare that our leaders over the years have allowed our international community to become.

The forces behind NATO had already drawn up a plan for the ousting of Colonel Gaddafi long ago, because his humanitarian and development projects in Africa had started to bite the lobbies which control our policy - the energy lobby, the arms lobby, the pharmaceutical lobby, the banking lobby, the drugs lobby. Rather than allow the African Union to take care of Africa's problems, rather than facilitate matters for Africa and Africans, they were scared that the African countries would stand on their own two feet - and stop paying massive interest repayments for the loans provided to them.

We do not have space here to back up the points with examples, for this is an opinion piece. Needless to say Colonel Gaddafi was to receive a humanitarian prize from the UNO in March 2011 for his work. Enter the armed wing of these lobbies, NATO. Enter the politicians who serve, it appears, to put a gloss on the product, a veneer which together with a nice tidy media package, shapes public opinion and provokes the collective unseen nod which gives the go-ahead to the project, however horrific it may be.

It is as horrific as a group of thugs taking their Pit Bulls, Rottweilers and Stafforshire Terriers to the local park, eyeing up a young girl taking her Cocker Spaniel for a walk, sensing it would make a great video to sell on the Net ("Bonzo, Tiger and Rambo Phuck Fluffy"), then setting their animals loose to tear "Fluffy" to bits, along with the terrified, innocent and defenceless screaming little girl. The park owner affirms to the press that the Cocker was really a lion in disguise which had been terrifying everyone in the park for months and the local newspaper reports that the girl is really a 23-year-old crack-addicted whore who has given AIDS to all the gentlemen in the village.

The community buys the story, shrugs and says, Oh well then, she had it coming didn't she? Oh and by the way, what time is Big Brother on? Oh no! It's on at the same time as The Simpsons on One and Spanking Sarah on Three!

The parallel could not be more exact. This is precisely what our international community has become, eleven years into the Third Millennium. For a start, there is no such thing as international law. The only notion that applies is that laws are obviously made to be broken. A hoodie in the UK can get six months for stealing a pair of trainers, but the Bullingdon Club could trash restaurants and get off Scot-free; a chav can get a criminal record for stealing a plasma TV, while the Member of Parliament he elected can get the same plasma TV screen by stealing using the taxpayers' money, then say "Oh, sorry! If I have to pay it back, then I shall".

The sinister clique of lobbyists who NATO serves as their armed wing, and who our elected representatives serve as the "marketing department" and nothing more, decide who is guilty and who is innocent. The Hague Tribunal, that insult to international law, even declares people guilty before the trial has begun, it kidnaps foreign politicians and detains them illegally before they die under custody (Milosevic), tries Serbs, a token Croat, Bosnian and Albanian, Africans of course...does it try anyone from NATO countries despite their horrific war crimes and crimes against humanity, breaches of international law, violation of the Geneva Conventions? No, it does not.

It is not surprising that the core of nations which forms NATO's spine view the world from a top-down approach because they are former colonial powers who split up the international community by drawing lines on maps. "This is ours, and that is yours, eh what?". The only difference these days is that it is not the leaders of nations deciding who gets what, it is the powerful lobbies which in fact control them behind the scenes, and in some "democracies", put them there.

So, this is not democracy, for our representatives do not represent our will and our world is not ruled from an egalitarian perspective; indeed, the international "community" has two sets of weights and measures.

Rather than fantasise about water-boarding the freaks who carried this out, in acid, along with their political bed-pals, we can concentrate on the UNSC Resolutions covering this case (see article attached below *) and take up the case with the Council of Europe and the European Court of Human Rights, initiating cases against NATO as an organization, and against the individuals representing their countries' participation in this criminal act, which occasioned the crimes of murder, attempted murder, crimes against humanity, war crimes, criminal damage, grievous bodily harm and actual bodily harm of civilians, Breach of the UN Charter, Breach of UNSC Resolutions, Breach of the Geneva Conventions (see list below **).

After this, yes we must network and form a new international community. It is by now apparent that the UNO is a useful organization for humanitarian projects but useless at promoting international peace. The UNSC is a disgrace, being no more than a chamber through which interests are traded (you back this or do not use your veto and we will get you into the World Trade Organization, we promise not to arm your rebels, we will not back President X. any more, we will not object to your trading practices, ooh! and was it the safari in Kenya that your wife was interested in?).

It is also more than apparent that our dearly beloved and elected leaders, as a whole, while there are exceptions, have failed us wholly and completely because they have not represented the interests of the people of the world. If there are 204 sovereign states (recognised or not) then there are 204 heads of state, there are 204 heads of government, there are 204 Ministers of Defence, there are 204 Ministers of Foreign Affairs, in total 816 persons. The world population is 6,940,000,000 - six billion, nine hundred and forty million. These 816 persons, or even worse, a fraction of them, do not have any right to abuse international law and instigate conflicts acting at the beck and call of the corporative lobbies which control their policies, which affect us directly.

Therefore let us create a New World Order based upon collective human rights and values. Let us draw up a list of human rights and values which apply to all, including the precept of the respect for human life and the inviolability of the person, let us draw up a legal code which is applied to all, equally, with the same criteria and let us constitute an International Court of Justice which applies to all citizens of all signatory States.

The Libyan Jamahiriya is, in my opinion, an excellent model for political governance because it is the only one which takes into account the basic and fundamental secret underlying human relations among all peoples - the notion that the human being functions very well as a community and the further away you get from that, the worse it becomes.

Compare a small village anywhere with a large city anywhere. Yet this is not for me to decide, it is for the international community to take action and to draw the lines which describe where we wish to go. For sure, what we do or not today will be judged by our peers of tomorrow. They will look back at us and analyse what we have become - a community of cowards, of losers who speak a lot but do nothing, who allowed ourselves and our governments to be dictated to by a handful of invisible barons who represent the lobbies which in turn control our destiny.

The model of political governance at a national level is a subject for debate and any universal implementation will be the subject matter for our descendants. However, we can clear the path by constituting an international United People's Organization based upon the values referred to in this article.

* Where does International Law stand on this?