Russia may bid farewell to Caucasus? 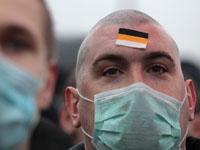 The program for the Development of the Northern Caucasus in 2012-2025 prepared by the Ministry of Regional Development and worth nearly 4 trillion rubles stirred up the "separatist" wave in the society that threatens to erase once and for all Adygeya, Dagestan, Ingushetia, Kabardino-Balkaria, Karachay-Cherkessia, North Ossetia, and of course, Chechnya from the map of Russia.

The "pro" arguments are well-known: 1) we feed them (huge subsidies from the federal budget; 2) they are blowing us up (the Caucasus as a permanent source of terrorism), and 3) they do not respect us (a number of facts ranging from ethnic crime to the national dances at the Manege Square).

Certain circles believe that only radical measures will solve all aforementioned problems in one swoop and then everyone else will be happy. The "separatists" do not bother with the practical side of the issue of the construction of the "Great Caucasus wall." It is very simple: strip them off the Russian citizenship, move them out of Russia, install a barbed wire fence and ban the re-entry.

It is hard to come up with a better excuse for a civil war. Does anyone think that the process of disengagement will be quiet and peaceful? It would seem that the example of the "independent" (factually) Chechnya of 1996-1999 should have once and for all shown that even being separated the Caucasus would not leave Russia and would not dissolve. On the contrary, the following would happen:

- The power on the rogue territories will be taken by the rogue, whose raison d'être would be a constant battle with the hated neighbor. This means that at least chronic border disputes are guaranteed;

- There will be an endless series of lawsuits against Russia with territorial and property claims, with the full approval and even whole-hearted support of the Western countries;

- The final solution of the "Russian issue" in the North Caucasus will be just around the corner. Objections that there is no Russian-speaking population left there are not true. Besides the nearly mono-ethnic Chechnya, there is Adygea where the Russian population is the majority (approximately 65 percent), and Russian Mozdok in North Ossetia, as well as numerous Cossack villages scattered throughout the region. In a full-scale conflict aggravated by a forced relocation, the Russian-speaking inhabitants would perish first.

Separatists from other autonomous regions such as Tatarstan and Sakha Republic will get an example to follow. The country will experience the formation of the notorious "fifth column", this time capable of blowing Russia up from within. The new "foreign countries" will be happy to help.

I repeat: we can certainly say goodbye to the Caucasus, but it will not leave us. The desire to wait it out behind the proverbial wall is equivalent to the decision to lock oneself in the apartment and not go outside because there may be hooligans there. If someone does not want to abide by the rules of human coexistence, it is necessary to punish the rogue specifically, without making global generalizations.

It is even stranger to call this position "patriotic." Patriotism, for those who do not know, in ancient Greek means "fatherland" and dictionaries treat the term more broadly - "the love for one's country." Dr. Samuel Johnson who uttered his immortal "Patriotism is the last refuge of a scoundrel" in 1775 meant that the scoundrel has still some hope if he loves his country.

It seems that in the 21st century the aphorism of Johnson is turned the other way around. Patriotism in a distorted understanding has truly become a refuge for scoundrels, for it is a very convenient cover for stupidity, cowardice and betrayal behind the hypocritical mask.

Stupidity - because there is no simple, painless and effective mechanism to remove the Caucasus problems. Have people failed to learn from the last parade of sovereignties? First we said goodbye to the "unnecessary" Baltic States, then bid farewell to the Soviet Union.

Cowardice - because the withdrawal from the Caucasus can be described by a brief, but telling slogan - "Holes instead of mountains." Betrayal - because even though Russia is great, there is not enough space to retreat.