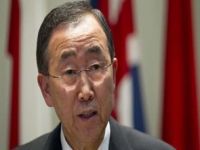 Now that beats all...

UN Secretary General Ban Ki-moon recently expressed concern over the rising civilian casualties in Libya, saying there will be no military solution for resolving the conflict in the North African nation. It took him that long to figure it out?

"The Secretary General is deeply concerned by reports of the unacceptably large number of civilian casualties as a result of the conflict in Libya," a statement from Ban's office said.

NATO airstrikes at Majer killed 85 innocent civilians, including 33 children, 32 women and 20 men. Journalists and visitors were shown 30 of the bodies in a local morgue, including a mother with two little children. Approximately 50 bodies were taken to other locations for family burial while the injured were rushed to hospitals in Tripoli.

Cowardly NATO scum, trash and garbage uses these super wonder weapons that require absolutely no courage to utilize: aircraft at 35,000 feet, ultra-long range artillery, cruise missiles, and guided missiles, weapons that kill at a distance, so that the mindless bastards doing the killing need not have to face the reality of what they are doing. It's a virtual world of unreality with very real consequences to those at the receiving end.

It's about time Moon the goon noticed the civilian deaths caused by NATO. It's unfortunate that he doesn't manage to see that it's a repeated pattern of destruction: destroy civilians, destroy civilian infrastructure with military hardware: hospitals schools, television facilities, the water and electricity system...all vital to conduct human life.

This is all happening in the month of Ramadan...just imagine in a Sahara country what would be the consequences for people with the water supply cut off? The temperatures are also excessive, adding to the misery.

Hower, misery is the name of the game for NATO. They delude themselves to think that creating civilian misery will help their cause, indeed, just the opposite is happening. The more misery they try to inflict on this sturdy, resolute, courageous people, the more their goal is alluding them.

Next month the UN will meet again to determine what happens next with these resolutions. But is this poor excuse for a human being blind, deaf and dumb? He could end the suffering now, but chooses not to.

What is stopping him from putting an end to it now?

No one can say that he is unaware of what NATO is doing. His heavy pockets seem to have caused this inability to engage his brain or conscience. Apparently neither are in working condition.

As he stands idly by, his pockets fatterning, every death, every act of destruction, becomes part of the responsibility of Ban Ki-Moon, the incompetent goon. He is guilty of complicity in war crimes, and he will be punished for his crimes. As will the leaders and enablers, pilots and paper pushers of NATO, not to mention the unscrupulous media that silences the truth and knowingly spreads disinformation.

Further evidence of NATO violations of the UN resolutions exist, as in no boots on the ground and no supplying weapons to either side. Both of these stipulations have been obviously and transparently violated by NATO. And where is Moon the goon? Silent, blind, deaf, dumb.

The United Nations was created for the purpose of defending peace, preventing war and aggression, defending human rights. However, being under the de facto control of the Evil Empire, it does the opposite. It instigates war, instigates crimes against humanity and enables massive human rights violations.

Either the United Nations needs a massive overhaul, or it needs to be disbanded since it runs counter to the purposes for which it was founded.

It was not founded to implement the concept of the "White Man's Burden" to teach "backward people" read those who will not do what they're told, how to be civilized.

Every empire thought itself indestructible and invincible. But as empires descend into brutality, barbarism and wanton destruction, they sow the seeds of their own demise.

The never ending wars of conquest and plunder can go no further. Napolean is about to meet his Waterloo. As civilization is lost and replaced with barbarism, the creative and positive sparks of humanity are extinguished, hence the global economic crisis.

I hereby charge NATO with gross violations of international law, international law that includes, but is not limited to Article 3 of the Statute of The Hague International Penal Court which clearly states that one criterion for indictment for war crimes is: "Attack or bombardment, by whatever means, against undefended cities, towns, villages, buildings or houses."

I hereby call on Ban Ki-Moon, the incompetent goon, to do his job and stop the genocide, wanton murder, terrorism against the Libyan people and destruction of civilian infrastructure IMMEDIATELY. Otherwise, he should resign his position which he accepted under false pretenses.

If they think they are going to get all kinds of lucrative recontruction contracts for their cronies, think again, it will never happen. The world community must reach out to the Libyan people and comfort, console and restore them.

When you are or become what you claim to hate, you have lost...the defeat of NATO is more than a military reality and a military certainty. Civilization cannot exist as long as NATO does. NATO RIH, rot in hell.