Does the international community exist? 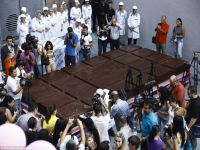 NATO is committing war crimes daily in Libya, the latest massacre of children and civilians in Zliten demonstrating its cold-blooded and reptilian callous disregard for human life as it proceeds to bomb indiscriminately in a desperate attempt to aid the terrorists it supports, knowing full well the TNC has the support of some 2% of Libyans.

In so doing, they are bypassing the controlled media through which NATO wises to pass its squeaky clean message of dastardly dictators siphoning off money for themselves and their families, the poor, poor people held down (sniff) and (tear) the children being killed and screaming in hospitals (right on cue, SKY shows a screaming boy...careful, hold the camera straight, make sure you don't get that needle in, they might see he is having a routine inoculation).

In so doing, the international community, or those of us who want to find out what is really going on, are very well aware of the facts. After all, the uprising in Libya did not come in the capital city, Tripoli, where 2.7 out of Libya's 6 million people live. It started along the borders, already controlled by NATO after the revolutions in Tunisia and Egypt and in the port city of Misratah, where NATO warships could ferry in terrorists and supplies at will.

And what has the leadership of the international community done? Absolutely nothing. They have sat on their backsides either watching nonchalantly, or else they have suddenly become fascinated with their fingernails, the palms of their hands, their navels or their feet, swallowing silently like a sickening bunch of snivelling cowards, a useless collection of specimens which are the worst possible apology for human beings and for humankind.

This disgusting act of collective cowardice or worse, collusion, is entirely unacceptable and goes wholly against the grain of the collective will in the hearts and minds of the people of the international community, who stand shoulder to shoulder beside their brothers and sisters, the heroic people of Libya and their beloved Brother Leader.

Shame on those who could and should be doing much more to stop this. This said, it is the duty of every civilised human being to take this matter up through the proper legal channels. Let us continue networking to bring the NATO war criminals to justice. We have been abandoned by those we looked to to support us and to uphold international law but this does not mean we cannot take up the fight ourselves.

Does the international community exist? Yes, it does, and Libya has shown us what it is really made of - not the sickening turncoats whose pockets are lined by the corporate elitists to whose wills and policies they pander and grovel but rather, by the rank and file of humankind. More and more of us are coming together, like brothers and sisters, from the four corners of the Earth, learning from each other, interacting with each other and drinking deep from that cup which is human knowledge. We are black, we are white, we are yellow, we are brown, we are Moslems, we are Jews, we are Christians, we are monarchists, atheists, conservatives, communists, radicals, women, men, straight, gay...we are human beings.

And we are now the international community. We do not need those who have allowed Libya to happen and who are perpetrating the crimes. Libya has taught us that we have surpassed them and now, we can hold them accountable in the ballot box. Did you vote for NATO to control your foreign policy? Then why does it? Bring it onto the political agenda.