US and Russia exchange non-diplomatic actions 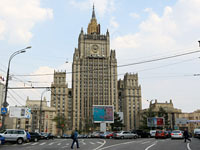 The U.S. State Department and the Foreign Ministry of Russia had to enter into non-diplomatic correspondence because of the actions of the lawyer with the fund Hermitage Capital. He, with the filing of Senator Benjamin Cardin, dropped the "iron curtain" in front of a number of Russian officials, who, in the opinion of Americans, are guilty of the death of Sergei Magnitsky who died on November 16, 2009 at the detention center.

This reaction was in full accordance with the Old Testament principle of eye for an eye, "a list for the list." From now on, for the U.S. citizens "interfering in US-Russian relations," Russia will turn into terra incognito. There are a few dozen of those at the moment, according to "Kommersant."

The Foreign Ministry officially denies the existence of the "anti-list," stating that "the relevant instruction of the president is still under development." Nevertheless, the process is in full force, because "in recent years we have repeatedly witnessed gross violations of human rights of Russians in respect of the citizens of Russia and Russian companies under the American legislation in the ex-territorial basis. This is unacceptable."

There is a grand myth that for Russian officials the US is the Promised Land. However, in practice this is by far is not the case. Therefore, it is unlikely that potential persona non grata will view the denial of the US visas as a tragedy. Prison doctors who were also put on the list will not be particularly upset either. Even more ridiculous is the promise that such an insignificant measure would help curb the corruption, as insisted by human rights activists of all ranks and suits.

In fairness, it must be noted that there are even fewer overseas bureaucrats striving to come to Russia and keep their money in Sberbank. Hardly any of the "civilians" in the US would be upset having learnt that they are denied entry to Russia. In this case, does this matter at all?

Chairman of the Board of Directors of "Baxter Group" Dmitry Gusev is convinced that it does matter. In an interview with "Pravda.ru" he stated: "This case is one of the key moments in the campaign of exerting pressure on Russia. After all, what is the "Magnitsky case"? It was a private dispute between two economic entities that were fighting over some large transaction. They disagreed on something, and someone killed someone. Yet, the claim is filed against the country. If we stick to this logic, for example, we would have to deliver an ultimatum to Oslo tomorrow, saying that the Norwegian state is not able to keep things in order and therefore we need to pressure them. This is absurd! America is simply acting on this principle. Our Foreign Ministry uses similar techniques. There is a "list of Magnitsky," therefore there will be an "anti-list." I do not see anything wrong here."

Dmitry Gusev was not exaggerating speaking about "pressure." A little earlier President Dmitry Medvedev stated the same, albeit in a more polite form: "I sometimes get the feeling that our country has only two issues that should worry those concerned with human rights -"Magnitsky case "and "Khodorkovsky case." They are significant, serious cases, but I think that after all we have to look deeper."

Unfortunately, not everyone is capable of looking deeper, choosing to stay on the surface. For certain individuals it is important to make noise, hence the abundance of "anti-lists." For example, the European Parliament has three such "documents" - the "Magnitsky list", "Khodorkovsky list" and "Nemtsov list." The latter was in jail for only 15 days, but decided to put himself on par with "the Great," and traditionally ask for foreign assistance. The request was "please punish Vladimir Putin along with 11 other senior government officials, or at least do not let them in your country. I can vividly imagine this: the Russian Prime Minister is arriving for some important negotiations, when he is told: "Turn around, Vladimir, you are denied the entry!"

There is another nuance. In the article published today by The Washington Post, Co-governmental U.S. Commission for Security and Cooperation in Europe (better known as the "Helsinki Commission"), a senator from the ruling Democratic Party, the frantic Cardin affirmed the determination of his fellow senators to pass a special bill " Sergei Magnitsky. The rule of law and responsibility." Among other things, the new law assumes the arrest of the perpetrators' assets not only in the US but also abroad. This is an excellent opportunity to feel other people's pockets. No one argues that the villains (all of them, not selectively) should be punished. However, it should be up to Russia to decide who is a villain. In his sermons Uncle Sam can go over all limits. This should be stopped gently but firmly.

"I think in this case an asymmetric response rather than a symmetric one would have been more effective," a candidate of Political Science, Deputy Director General of the CPC Alexander Shatilov shared his views on the situation with Pravda.ru. "If it does not go beyond letting out the steam, then it would reduce the credibility of the Russian authorities, including in the international arena. Therefore, any loud statements are appropriate only when we are really ready for serious enough actions. The "Magnitsky list" should cause a reaction. However, we should look for other, less formal ways to demonstrate our indignation."

These ways are not that difficult to find. It would be sufficient to deny the entry not to abstract "violators of the Russian-American relations," but very specific U.S. troops bound for Afghanistan in transit through the Russian territory. Incidentally, this should be done in full compliance with the document signed by Barack Obama talking not only of suspects in the "case of Magnitsky," but also about those involved in "war crimes" and "those who allowed violence against civilian population." The Afghans will be able to tell a great deal on this topic. There always be an appropriate response to every list.