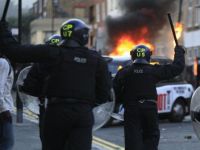 r a fire to burn, there has to be a flame and for smoke to billow into the sky high above London, Liverpool, Birmingham, Leeds and Bristol, there has to be fire - not just one, but many. While the British government spends tens of millions of pounds per week bombing Libyan children, the British youth takes to the streets. Where to draw the lines?

To begin with, to gloat and bask in the glory of the suffering of others is as fundamentally wrong as it is to bomb, strafe food supplies, water supplies, hospitals, schools, clinics, government offices and wilfully target private homes trying to kill people, as NATO is doing in Libya.

For a start, those of us who have contacts in the UK and who keep abreast of what is happening there saw this coming long ago. Marauding groups of youths throwing bottles in the streets, running amok in town centres on Friday and Saturday evenings, binge-drinking cheap alcoholic beverages then going berserk before trashing a bus shelter, railway station or smashing shop or house windows is not uncommon, if not commonplace in the United Kingdom today. The evening frequently ends in a pile of vomit or a pool of urine, after excrement is smeared all over the nearest wall or into the crack of a ticket machine.

Respect for the elderly has disappeared to the point that old ladies are afraid to venture out after dark, for fear of being pushed to the street, kicked and robbed. The perpetrators are a minority, yet you do not need that many incidents to create a widespread aura of insecurity; you do not need that many drunken marauding youths to create mayhem.

Enter the TV crews, showing us the worst aspect of the worst affected areas, and we have exponential wow! scenes to shock and awe TV audiences brought up on bullshit stories about how unarmed civilians are being attacked by Government forces in Libya and how wonderfully NATO behaved in breaching international law by arming them, siding with Al-Qaeda and then bombing Libyan government forces trying to restore law and order. Oh, and its water supply and electricity grid to "break" the people. Among these NATO countries is David Cameron's Britain.

The Libya factor or parallel

David Cameron does not have NATO on the other side training these youths, arming them to the teeth then backing them and their masters as they run amok. David Cameron does not have thousands of marauding terrorists in his midst torching Government property and slashing people's throats in the street, raping girls, killing young boys and torching public and private property.

David Cameron does not have NATO bombing his forces and his fire engines as they try to put out the fires, David Cameron has not seen Number Ten struck in a landstrike (the ground equivalent of a NATO airstrike, or else let us call both of them terrorist attacks) occasioning the death of his family, as Muammar al-Qathafi did.

David Cameron does not have a Government network calling for him to step down because he has lost the respect of his people, he has lost the right to govern and he must go. David Cameron does not hear anyone say he must step down now and it will be up to the British people to decide whether or not he stays in Britain. David Cameron has not, yet, been indicted for war crimes, for NATO's strafing of schools, of children's command and control centres, of hospitals or because his wonderfully brave forces protected civilians from attack by dropping bombs on Libya's water supply from 30,000 feet.

David Cameron, however, does have a problem and the situation that is happening in Britain today can be as complicated or simple as people wish to make it.

It is not Cameron in particular, it is the British politicians in general, with exceptions. To begin with, Britain is still gripped by the worst recession in living memory, a recession with teeth that bite, a recession which saw the end of the Labour government (more friendly towards public spending) and the beginning of a coalition government whose top-down approach to public finances involves laboratory politics, drawing lines on pages and becoming obsessed with the bottom line without ever getting near to understanding the consequences.

The nearest a British politician gets to an inner-city housing estate is when he or she is shepherded around by smiling civil servants to receive a token letter from a token child in a token school, grinning inanely sitting at a school desk pretending not to be bored...witless... by the spelling mistanes on the walls all around him/her, before being whisked away in a convoy of expensive vehicles, no doubt spraying their hands with a sanitised hand gel which "kills all germs" and muttering "Thank God for that!" as they speed back to Westminster, just as they muttered "regret" when NATO murdered the Gaddafi grandchildren and not a single court of law described itself as competent to take up the cause.

And here we see where the issues converge.

The seething rage felt in the international community against NATO is mirrored by the burning anger in the hearts and minds of young people growing up in the UK without an education, without a future, without a job. They feel abandoned, let-down and alone. In some areas, free education places and subsidized courses have been savagely reduced by 85%.

What took the biscuit for many of them was the decision to start cutting back on community centres and community services because "we can't afford it" (yet they can afford a sortie by an RAF jet which costs up to 100,000 dollars per aircraft per hour in Libya). As usual, the spark was provided by the death of a man - shot by police (it matters not what his colour was) and a police report which yet again appeared to be "sexed up" (the bullet that this man supposedly fired at a police officer came back from ballistics as "police issue").

Add to this the radical militant elements which feed off unrest and take advantage of a flashpoint, add to this the fact that in August the schools are on holiday yet most of the schoolboys in the inner city areas do not know what a family holiday is, unlike Cameron or the Mayor of London, Boris Johnson and the majority of Members of Parliament (called back for an emergency session on Thursday apparently amid groans, in privacy, of "oh no, what about my holiday?")...

Add to this the low morale caused by high unemployment, add to this the cutbacks in the police, community policing programmes and public services in general, and what happens?

What started as a local issue served as the spark which produced the flashpoint, and after a Day of Rage (which Britain and others fomented and fostered in Libya), soon had its flames fanned first at a city level, across London, then on day 3, a nationwide level, with serious incidents in Bristol, Birmingham, Leeds and Liverpool, all centred in or around deprived neighbourhoods - and in all the main cities of England.

Where does this go?

After three days, 525 arrests and 100 people charged with public disorder offences, the police-speak is bullish, with promises of heavy prison sentences and rather provocative remarks about police kicking doors in and arresting people in the forthcoming weeks. However, with the prisons already full to bursting point and Government officials scratching their heads finding ways to empty them, such a policy could backfire.

To date, the trouble in London has centred around Tottenham, Croydon, Clapham, Hackney, Ealing, Peckham and Enfield - all areas with focal points of poverty if not, in some cases, endemic marginalized communities. The arson attacks show that among the operationals there are two groups - the pawns who in general are opportunists looking for a night of violence and looting and those who know what they are doing, the controllers.

It is this last group which will dictate how far this goes. Fortunately for the British government, it does not have others arming them and goading them on, like NATO did in Libya. While the history book indicates that this sort of activity loses its appeal after a few days and dies down, a sinister new vector would be the use of firearms on the streets. This would change British society for good.

Let us just hope that others do not do to Britain what Britain does to others, through its activities in NATO. The bottom line is that violence should not pay, anywhere.

15:08
Russian Parliament ratifies agreements about new territories
18:18
Ukraine invites NATO to join conflict with Russia directly
17:57
Zelensky won't negotiate with Russia while Putin is president
16:20
Putin signs agreements incorporating DPR, LPR, Kherson and Zaporozhye regions into Russia
15:39
Putin delivers landmark speech in the Kremlin
15:15
Lukashenko: If Europe wants it, the war may end in a few days
14:54
Ukraine and the West may force Russia to use tactical nuclear weapons
13:33
Russia to take control of entire Donetsk People's Republic within its 2014 borders
19:02
Mobilised citizens to control and defend new Russian territories
15:52
USA can still crush Russia, but it can also save the world from chaos
Russia
Senator Valentina Matviyenko: Let the whole world wait till October 4