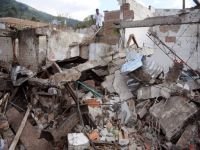 If this isn't evil, what is?

Yet this matters not to NATO. It considers itself above the law, no legal entity has the guts to counter it or even to launch proceedings, nobody in the international community stands up to this evil terrorist organization. And the result is what we see:

Tripoli pounded day after day, night after night after night, in an endless and mindless bombing campaign, a campaign of wanton, wilful, murderous destruction and criminal damage, blasting away at the same targets, spending tens of millions of dollars on what?

Farms are being destroyed, Universities are being destroyed, homes are being destroyed. Bab Al-Ziza, formerly a residence and office used by Muammar al-Qathafi, is bombed every single night - an inane and pointless policy without any tangible results at all because nobody is using it, just a singular criminal act of terrorism and a total waste of taxpayers' money, precision-targeting a structure where NATO knows civilians will gather.

Yet despite this onslaught, despite this demonic wanton act of murder, the Libyan Armed Forces continue to liberate towns and villages, who welcome them with open arms, freeing them from the criminal gangs of terrorists unleashed by NATO (many of them foreigners including soldiers from NATO countries) who slaughter, rape and pillage.

It is difficult to imagine any act of evil more pure or more sinister than NATO's Libya campaign and it defies logic that the rest of the world looks on like some impotent voyeur witnessing a child being slaughtered and doing nothing. Nothing whatsoever.

What a sickening international community we live in, and how fitting will be the epitaph written about us collectively by future generations.