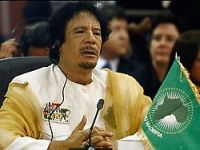 Those associated with NATO, whether it be the demonic animals on top giving the orders or the mindless, video game junkie, cowardly, stinking, bastard pilots who actually carry out the orders, are truly stupid, I mean real geniuses.

Don't they realize that the more people they kill, the more damage they do, the less likely they are to come out of this horror of their creation. the aggression against Libya, "saving face"??

If you count the massive war crimes they have committed against Libya, "saving face" is totally out of the question now. Having been defeated in Zlintan, in another act of obvious cowardly desperation, NATO trash and garbage bombed a children's hospital, killing 50 children.

Now not only have they savagely and brutally murdered 50 innocent children, but they have also deprived how many countless other children of receiving needed medical care? Given their savage daily attacks on civilians, the number will be high.

There is no room, none at all, for the claims that they are doing what they are doing to "save civilian lives." No one with half a brain was fooled by that at the outset, especially not anyone familar with their miserable track record.

Who are garbage, trash and evil demons from NATO, US, EU and the sycophant countries with their noses up NATO's stinking putrid behind to tell them differently?

The bottom line for NATO is that their terrorist stooges no longer control Benghazi, the leader of their puppet "government" has fled, reports are that he is hiding in Turkey. How's that for a government, geniuses? A two year old could probably pick out a better government than the garbage from NATO.

Would you thieves like to shove more stolen money down that bottomless pit known as the National Transitional Council?

Now that they are all cozy with 13 million dollars belonging to the Libyan people in the Libyan Embassy in Washington...Barack, you lying demon, how would you like those eggs on your face cooked, scrambled or easy over with drooling raw yoke running down your lying lips?

Baby killers, child killers...that is what everyone who serves NATO is, even the paper shuffling desk clerk, the journalist that is still writing to his or her zombie readers that "we are protecting civilians because Gaddafi is killing his own people," the video game pilot 35,000 feet in the air, the national poor excuse for leaders such as Napoleon Sarkozy, CaMORON and Obomba, YOU ARE CHILD KILLERS AND BABY KILLERS and there isn't anything, no commercial soap product that will ever wipe the stain of that blood off of your hands and your ugly black souls.

As the end of this horrendous war draws near with the final defeat of NATO, we must come together to assure that the criminals will be punished in full measure. Especially for these most innocent little children. A world revolution is needed to upset the power broker elites so that impunity will end, and most of all that the killing, destruction and genocide will end.

This will be led by Muammar Gaddafi, a man who has demonstrated in every way that he is the most worthy of our trust and confidence.