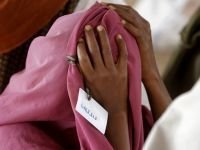 Humanity is at a crossroads in Libya. It has been coming for a long time and in Libya, it has arrived. Finally, the greyish mists which have been clouding our skies have lifted and what is happening is crystal clear...and humankind has a decision to make, and fast. The situation demands not voyeurism and comments, but action. Now!

Where NATO was and is, now becomes apparent. It was originally a defensive organization, fuelled by a collective fear of the Soviet Union (whose armed forces were essentially defensive). NATO then ran out of steam, and lost its reason to be, in the early 1990s, when the USSR entered into voluntary dissolution (not "collapse") and after the Warsaw Pact was voluntarily dissolved. After all, what justification did a "defensive" organism have to exist after its "enemy" was no more?

It didn't take long for corporatism to supplant market economy capitalism, the same time it took the new NATO to supplant the old. The tried and tested Socialist model had proved its worth, bringing societies into the front line of development, through excellent programs of education and free public services. Its job done, its societies decided to try out the new market economy model. What happened?

The answer is: the big space has destroyed them and the communities they served. Out went the human touch. And as far as NATO is concerned, out went human values, because exactly the same thing happened at a higher and more sinister level.

For a start, the causus belli did not exist (Weapons of Mass Destruction). Secondly, there had been efforts by NATO countries to create such a justification for war (yellowcake uranium imported from Nigeria  - when Niger is the producer; Colin Powell's address to the UNO about Iraq's weapons, when none existed; the UK's evidence about the same, a thesis copied and pasted from the Net). Thirdly, NATO's modus operandi inside Iraq served as a window on the true nature of the organization this clique of nations had morphed into.

Iraq: What really did it for me was the discovery that on the desk of Richard (also known as Dick) Cheney, a shopping list had been dropped, containing artefacts from Baghdad museums, drawn up by his cronies.

Then we discovered that the Afghanistan war was in fact nothing to do with the Taleban (who are being paid off handsomely not to attack by the way, and where NATO troops have been photographed guarding opium poppy plantations) but rather connected to the Central Asian energy resources.

In Libya, we see that this is the case. Instead of western powers and news agencies praising Muammar al-Qathafi for his wonderful human rights record, namely:

Homophobia - against the murder of homosexuals;

The UN report for which he was to receive a humanitarian prize in 2011:

We see that in Libya, these invisible cliques serving the interests of the lobbies are active, and more than this, are controlling western governments. From the outset it was obvious that the entire rebellion was stage-managed from outside (where did those flags come from?) and it becomes increasingly obvious that NATO countries and their allies are arming the terrorists (sorry, "rebels").

The British dynamic duo, Cameron and Hague, started off by saying, quote: "This has nothing to do with Gaddafi staying", then "It is up to the Libyan people but it would be better if he went" then" He has to go".  Lines on maps, "This is ours and that is yours, what?" and how about remembering what the BLACK AND TANS DID IN IRELAND?? So do not Cameron or Hague DARE to speak about terrorism... or Obama, for the IRA was funded primarily by NORAID in New York.

This hurt. NATO swung into action. So now we see, NATO is nothing more or less than the military arm of the mega-corporations that rule the western world. Humankind has a choice: Accept: Yes or no?

If no, then there are things we can do:

1). In any court of international law, NATO's acts in Libya violate the UN Charter and the Geneva Conventions. Therefore any State which does NOT bring a case against NATO is a snivelling coward and as such deserves the utter derision of the international community;

2). Given that the Governments of our planet have failed to implement international law, then let the people of the world take up the cause, now that our leaders have failed us;

4). Renegotiate contracts with these countries, do not travel with their airlines and do not visit them, cut their companies out of your home country;

5). Civilian non-violent conduct: disseminate music and lyrics for our youth to sing, ridiculing NATO; T-shirts with the motto: NATO TARGET

If humankind does not rise to the challenge and does not right what is clearly wrong, then there is a clear legitimacy for those of us who care, to take the matter up into our own hands.

Let us hope this isn't necessary. We are going to sit back and watch? Or take up the flame which from time to time marked where we are and where we are going? If we do not, then future generations will judge us as that which allowed itself to be taken over by corporatism,

The generation that bent over, lowered its pants and took it waaaayyyyyyyyyyyyyyyyy up there where the Sun doesn't shine. The question is, this is no joke.