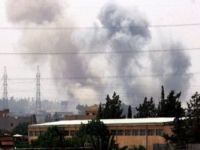 Are journalists doing their job a legitimate military target? Do nations that purport to be "defending" or promoting "freedom" and "democracy" not show themselves to be nothing less than murderous hypocrites and criminals when they attack a television station in order to silence it? They did it in Yugoslavia, and now, again, they did it in Libya.

According to the UN Resolution mandate, the no-fly zone was approved in order to "protect" civilians. How does attacking a television station and murdering civlian journalists there come under that category? This is nothing less than an outrageous, blatant war crime. To this day, NATO garbage still believes they can commit war crimes and trample on international law with impunity.

At 1:50 a.m. Friday, July 30th, the first of a series of nine blasts hit Libyan state television, killing 3 persons and wounding another fifteen.

According to NATO's official line, their spokesperson Lavoie considered that allowing Libya's population to hear dangerous public service announcements concerning subjects such as gasoline availability, food distribution for Ramadan, updates on areas to be avoided due to recent NATO bombing, prayers and lectures by Sheiks on moral and religious subjects during Ramadan or see the Prayer Times chart posted on government TV, during this month of fasting, plus children's programs and normal programming, had to stop immediately as a mortal threat to the civilian population.

Further, NATO states their reason to bomb Libyan government TV is that Libyan leader Ghaddafi has been giving interviews and speeches following repeated NATO bombings which recently have included hospitals, Ramadan food storage warehouses, the nation's main water distribution infrastructure, private homes, and more than 1,600 other civilian sites, including a center for handicapped children with Down Syndrome. Private home attacks have killed countless children, including 3 of Muammar Gaddafi's own grandchildren in an assassination attempt.

The bombing of Libya's transmission towers is clearly not within UN resolutions 1970 and 1973, the scope of which NATO has exceeded beyond all recognition from their original intent.

Included here is a letter written by Libyan journalists in a message to others in the profession asking for our solidarity with them.

In an act of international terrorism and in violation of Security Council resolutions of the UN, NATO attacked the facilities of the Broadcasting Department of Libya during the early hours of this morning. Three of our technicians were killed and 15 injured while performing their professional duty as Libyan journalists.

NATO admits the commission of his crime to "silence the propaganda machine of Gaddafi" as a justification to act like murderers.

We are employees of Libyan state television. We are not a military target, we are not officers in the army and not a threat to civilians. We are doing our job as journalists in representing what from the bottom of my heart we believe is the reality of the NATO aggression and violence in Libya.

We have the right to work in a secure environment protected by national and international laws. The fact that we work for the government of Libya, or that we represent opposing views on NATO and their armed gangs does not make us a legitimate target for NATO rockets.

As journalists, we demand to have the full protection of the international community and we ask our brothers in the profession from all over the world rise up against such attacks against media personnel.

Foreign journalists in Tripoli, Reporters Without Borders and human rights organizations, we appeal to you to express your moral and professional clear position on this issue.

We hope that the media will help us to highlight this important issue and act in support of our just cause.

Also included is the recent Proclamation by the Libyan tribes, informing NATO to leave the country alone and the total and complete rejection of the terrorist National Transition Council:

Speaking for Libya's 2000 tribes, the Council issued a Proclamation signed by scores of tribal leaders from eastern Libya.

"By this letter to the extraordinary African Summit, convening in Addis Ababa, the notables of the Eastern tribes of the Great Jamahiriya confirm their complete rejection of what is called the Transitional Council in Benghazi which hasn't been nominated nor elected by Tribal ...representatives but rather imposed by NATO."

"What is called the Transitional Council in Benghazi was imposed by NATO on us and we completely reject it. Is it democracy to impose people with armed power on the people of Benghazi, many of whose leaders are not even Libyan or from Libyan tribes but come from Tunisia and other countries."

"The Trial Council assures its continuing cooperation with the African Union in its suggestions aimed at helping to prevent the aggression on the Libyan people"....

"The Tribal Council condemns the crusader aggression on the Great Jamahiriya executed by the NATO and the Arabic regressive forces which is a grave threat to Libyan civilians as it continues to kill them as NATO bombs civilian targets."...

"We do not and will not accept any authority other than the authority that we chose with our free will which is the People's Congress and Peoples Committees, and the popular social leadership, and will oppose with all available means, the NATO rebels and their slaughter, violence and maiming of cadavers. We intend to oppose with all the means available to us the NATO crusader aggressors and their appointed lackeys".

According to one representative of the Libyan Supreme Tribal Council, "The tribes of Libya have until today not fully joined in repelling the NATO aggressors. As we do, we serve notice to NATO that we shall not desist until they have left our country and we will ensure that they never return."

NATO's war crimes continue to mount in ferocity and number, and they will continue to be documented in this space. NATO has truly shown itself to be an evil conceived in the bowels of hell and run by devils and demons without an ounce of humanity.