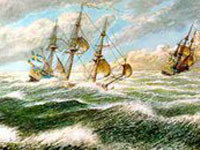 William Hague comes from a region where not so many years ago, one could find on the door of public houses (pubs) the message "No dogs or gypsies allowed". As a child, William Hague probably did not see this but then again as an adult, there is so much more that he continues not to see. And when these values are implanted onto other cultures?

The British Foreign Minister, William Hague, comes from a part of England called Yorkshire, home to the "chip buttie" (a sandwich made of bread, butter and fried potatoes..."freedom fries" to those across the water) and where not so many years ago, one could find the warning sign fixed starkly and ominously to the doors of public houses, "NO DOGS OR GYPSIES", in that order. Of course, as a child, William Jefferson Hague almost certainly was as blissfully unaware of this part of the culture of the region where he grew up as indeed he is of the intricacies of cultures and peoples who have not yet been colonised by the "chip buttie" nor indeed introduced to freedom and democracy by having the faces blasted off their kids from some coward in a uniform 30,000 feet up in the sky.

When we get to David Cameron, the upbringing is that much more cloistered and therefore that much more dangerous when we are dealing with individuals whose vision of the world starts and stops in a one-yard square around their feet, people with as much vision as the length of their snouts and therefore whose judgement one could trust as far as one could...spit. And that isn't very far.

For Hague and Cameron, read Clinton and Obama, read Sarkozy and Juppe and read that nasty clique of cold-blooded, callous murderers who implement NATO policy drawing lines on maps, still saying "This is ours and that is yours, eh what?" and whose policy-making includes purposefully targeting civilian structures with explosives to "break public opinion" (targeting food stocks and water supplies is a war crime and must be punished) and precision-bombing a family home to "take out" a leader (another crime).

For those of us who have been fortunate or resourceful enough to spend a great part of our lives travelling, sometimes on a shoestring but always enjoying the comfort of human warmth and the enlightenment that meeting other cultures from a same-level and not a top-down approach brings, how enriched we have become assimilating and sharing experiences and cultures and customs and traditions and lores, tasting and delighting in each others' food, drinking deeply from that cup of human knowledge. The bottom line is written with one word: acceptance.

Such notions for people like us, and I really believe I speak in the name of the vast majority of humankind, come naturally and do not even deserve adjectives such as "noble" - such would be part of the pious stuck-up verbosity of some inhuman and inhumane self-centred protagonist whose pig-faced arrogance endowed him or her with the obsession to implant values on other people and cultures instead of accepting and enjoying difference. Such an approach is so evident in food-travel programmes in which the presenter pulls stupid faces when presented with local fare prepared lovingly for him or her to eat. Sheer insolence.

Such an approach was the underlying reason behind countless mutinies and massacres over the years, from Ireland to India and why does the buck always stop at the door of those who eat chip butties and cloistered British public schoolboys who like to play games such as "botties" in the evenings? The reader can imagine what the rules are and what equipment is needed to play.

Therefore it comes as no surprise that problems are created when butties and botties are taken out of context and imposed upon others by people who fail to recognise that the further East you travel, the more likely you are to be given a machine-gun for your fourteenth birthday present. Now define a "civilian". Define "unarmed". And when butties and botties are imposed upon cultures which are fundamentally tribal, then you get the same problems you do when you throw a glass of water into a flaming pan of oil. Now define "dictator", define "brutality".

As with the racist and exclusive message about dogs and gypsies, this imperialistic and colonialist approach to international relations belongs to the realms of the past, something that NATO, apparently, and the sickening clique of sycophantic cowards who nod obediently when the greyish faceless barons who represent the lobbies behind the organization start to bark orders, do not understand.

For a start I would bet that not one of them has bothered to read his Green Book, a manual of wisdom and a guideline for Governance which should serve as basic reading for everyone (what theories have Cameron and Hague produced? None). Secondly they have ignored the tremendous legacy Muammar al-Qathafi has left in Africa - he has done far more for the continent in half a century than their countries did in hundreds of years of slavery and colonialism and massacres; thirdly they do not understand the nature of Libyan society, fourthly they do not understand the Jamahiriya, which is far more democratic than the Parliament or the Congress.

Fifthly, they do understand - and here we see the sheer evil behind NATO and its masters - what has happened in Libya since February 17 because they unleashed it. They were the ones who produced the flags, they were the ones who armed, aided and abetted the "unarmed civilians" and instigated them to claim God alone knows what (many of them are now flocking back to Gaddafi's Green Libya). And they understand only too well that they have screwed up monumentally.

NATO is behaving like an animal caught in a trap, thrashing out violently without any planning, each jerk on the rope pulling the noose tighter around its neck. Every bomb that is dropped heightens the tangible feeling of sullen and seething hatred coursing through the veins of the hearts and minds of the international community; every murder that is committed is registered and those guilty will be held accountable.

It is now crystal clear that Nato is A Terrorist Organization and the international community now begins to judge those involved for their crimes. There is no way out of this except to disengage, because the damage can only get worse. The Libyan Armed Forces have risen to the challenge, the terrorists which NATO unleashed are on the run, they are fighting among themselves in an increasing myriad of factions, so massacring civilians with helicopters and wasting tens of millions of dollars a week when NATO countries are on the verge of bankruptcy defies logic. The NATO leaders might also explain to their populations how much their operation costs (up to 100,000 USD per aircraft per hour) and what has happened to the tens of millions of USD they have given to their pet terrorists.

There comes a time for every chapter to end, however nightmarish it may be and for a new dawn to begin. If NATO and its sickening pig-headed politicians cannot see a way out, then here it is: the original no-fly zone was imposed as a result of a false flag event as everyone now knows. The Libyan Air Force was bombing nobody, the authorities were reacting to a sudden burst of violence in which civilians were slaughtered in the streets by marauding bands of armed thugs, racists who cut the heads off and slit the throats of Negroes and whose lies the gullible buttie and botty-gobbling Hague and Cameron guzzled down as justification for their despicable acts of butchery unseen since the massacres by the Black and Tans in Ireland.

Recognise that NATO was wrong, that it is going nowhere (you don't have to say anything out loud, after all what to expect from a clique of bastards who between them just about mumbled the word "regret" when they fried the three grandchildren of Colonel Gaddafi in their skins?), disengage and allow the African Union to help sit the brothers and sisters of the Jamahiriya together to resolve their own problems with their own money and not your taxpayers' millions.

The longer this outrage continues, the deeper the notion that Nato is A Terrorist Organization.