Once upon a time in Libya 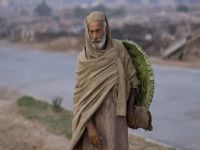 Once upon a time there was a good farmer in an arid region called Libya. Through hard work, he freed his farm of vultures, wild dogs and pigs who gobbled up the little it produced and turned it into an oasis, providing food not only for the Libyan people but also for an enormous area around, called Africa, whose people he fed and educated for free.

This good farmer was called Muammar. He turned the desert into good fertile land with its own water supply and the perfect conditions for three harvests a year. He treated his land well and worked hard, not taking much of the produce for himself, but instead developing what he had and distributing the wealth among his workers. He was so successful that he even expanded welfare projects to the villages around his farm, providing the people with food, medicine and learning programmes and allowing farmers in Africa to free themselves from bands of thieves who used to come and steal their produce, desecrate their lands and rape their women.

A group of farmers whose land was barren because they did not know how to farm it properly, eyed Muammar and his farm with greed and jealousy. After all, he had enough produce in just one harvest to feed them and their villages for decades. So these farmers, whose names were Nicolas and David, call on a third, named Barack, who was more powerful and together they hatched up a demonic scheme.

Muammar had fired a few lazy workers (Bingazi, Misratah and Tubruq) who were stealing produce and selling it for their own benefit whereas Muammar himself had distributed it to others for free. Barrack, David and Nicolas called them and spoke to them, promising them wealth beyond their wildest dreams if they followed orders.

One day these lazy workers, religious fanatics and perpetrators of the most unspeakable cruelty, started a riot. They raped two girls, the daughters of the foreman, aged four and six, they impaled a six-year-old boy with a stake, they slit the throats of the Negro workers and hacked people to death where they stood.

They called the other workers together, then one of them shot the others and said "Hey! Muammar is shooting us! Come and help!" David, Nicolas and Barack were already waiting on the east and west borders of Muammar's farm with massive supplies of weaponry. They even had thousands of flags made from before the time Muammar took the farm over, a time when it was the poorest farm in the entire region.

Bingazi, Misratah and Tubruq, "the lazy three", waved the flags furiously as they started torching food supplies, burnt the granary, destroyed the housing projects Muammar had built for them, set fire to the school he had built and looted the chapel. The other workers looked on aghast and went to Muammar's house to stand by him to protect the man they had come to call their Brother Leader.

Barack, David and Nicolas, using the little wealth they had accumulated against the collective wishes of their own families and workers, started a savage campaign bombing the buildings which Bingazi, Misratah and Tubruq "the lazy three" had not yet torched, a campaign in which they murdered one of Muammar's sons and murdered three of his grandchildren, as they claimed to be "protecting" the lazy three. They did not apologise, they just looked over their shoulders and sneered "We regret..." The rest of the sentence was imperceptible but some say it ended "that we did not kill Muammar". Then they sent in their "journalists" to invent stories about how noble the lazy three were and how terrible were Muammar and his good workers who supported him and loved him.

As the anger and defiance among Muammar's workers grew stronger and his good and loyal people fought back bravely, the lazy three reeled and asked David, Barack and Nicolas to start a campaign based on destroying Muammar's water supply so that his workers would be without water. They destroyed the main pipeline irrigating the fields and supplying drinking water then the following day they destroyed the workhouse where the water pipes were made. Water, the essence of life for thousands of years, since Humankind began, was targeted by military hardware. Now how evil is that?

Muammar said he would hold a collective meeting among his workers for them to choose who should lead them but Barack, David and Nicolas refused. After all, the lazy three had already been bought with promises and it was they who should lead the farm, because they would then be controlled and forced to give them their produce.

The people from the region around looked on horrified. Those who had formerly respected David, Barack and Nicolas and their representatives Willy, Hillary and Alan and who knew how worthless the lazy three were (after all, they had formerly been paid assassins creating havoc on other farms) were surprised at the recognition of terrorists, murderers and rapists as the leaders of the farm and disgusted at the acts of child murder and wanton destruction, so they came together to call upon the Justice System to take action.

At first the Justice System in a land called Belgi turned a blind eye, saying that terrorism was not a crime and basically that it couldn't give a flying duck about the rape and murder of children. However, as the surrounding community became more indignant, the longer this outrage went on, before they took the matter into their own hands, up stepped a strong, brave man whose authority David, Nicolas and Barack were forced to respect.

The end of the story is unclear. Some say it ended with the hanging of Barack, David and Nicolas and their representatives Willy, Hillary and Alan while the lazy three went away to slaughter and rape and burn on another farm. Others say that Barack, David and Nicolas actually controlled the justice system and went unpunished for their crimes. Well, it is only a story...

In this version, Muammar stayed on and rebuilt his farm, always wary of the lazy three whom he had never trusted, and continued to do his good deeds in Libya and Africa, while all the farms around him cut all contacts with Barack, David and Nicolas and renegotiated their deals with a new order of good farmers which had meanwhile appeared.

Barack, David and Nicolas and their farms were never, ever trusted again and were looked upon with hatred, suspicion and derision.

Muammar is still there today, looking after his children and grandchildren and continuing his humanitarian projects.