Dishonourable cowards and bully nations of NATO are trying to mass murder Libyans with bombs to solve problems. Actually in the case of Libya, as in others previously, there are no problems, except that the people and/or leadership will not bow to the dictates of the Empire. 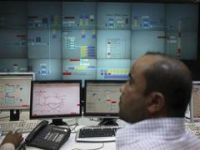 Control room for the miracle in the desert--water

It seems the countries of the west have forgotten Nuremberg. The main theme was the guilty had committed crimes against peace and crimes against humanity. It also was declared that military personnel cannot use "following orders" as an excuse for their behavior.

Perhaps the pilots should make a note of that and get answers to these questions before another mission is flown. You will be prosecuted for war crimes for killing civilians and destroying civilian infrastructure and for violating international law. NATO is committing crimes against peace and crimes against humanity.

On Friday, July 22nd, some of these mindless war criminals dropped bombs on Libya's vital water pipeline, that supplies water to 70 percent of Libya's population. Since when is a vital necessity for the sustaining of life a legitimate military target? Never!

Those mindless criminals are now going to be the subject of an international search to find their identities so that they may be prosecuted for crimes against humanity.

That bombing was an attempt at genocide, nothing less. The human being cannot live without water and no stretch of the imagination is going to excuse this horrendous crime.

If that were not enough, then another bombing mission on the following day hit the factory that makes replacement pipes for the water system. It seems someone wanted to deliberately make sure the water system would stay non-functional.

The U.N.is hereby on notice to lift a ban on importing spare parts so the water supply may be restored. The ill conceived U.N. Security Council resolutions ban imports of many items into Libya. These resolutions were passed under the conditions of fraud and disinformation.

"The Libyan leader Moammar Al Gaddafi informed members of the Security Council in his message that the alliance decided to carry out mass murder against the Libyan people by targeting their only drinking water source, where billions were invested and without it life stops in Libya. He wondered what's the relation between this factory and the protection of civilians that NATO claims it is carrying out?"

The purpose of these bombs is not to "protect civilians" but to cause maximum suffering to the civilian population, which by international law is COLLECTIVE PUNISHMENT.

Collective punishment such as what these NATO pilots are guilty of is equal to or worse than anything perpetrated by the Nazis during the war.

The Libyan people have been coming out in the millions, despite the plague in the sky...to demonstrate support for their government, leader and way of life. They will not go quietly into the night to be absorbed by the Empire. Libya and the Libyan people are not for sale.

The terrorist force, when not in-fighting, is weak, demoralized and incompetent. Their head was recently cut off. *"According to press reports on Sunday, Major General Abdel Fattah Younes, head of the rebel forces army in Libya, was killed in the fighting in the Brega area some 10 days ago in what was described as "mysterious circumstances."

This self-appointed terrorist collection known as the National Transitional Council was recognized by some pretentious devil worshipping countries in violation of every international law. They have violated the sovereignty of Libya and the Libyan people.

For their information, power to rule a country comes from the people who live in that country, not some garbage abroad, but enjoy your fantasy while you can, you have recognized nothing but dead men. But you certainly can't tell a bunch of pig headed fascists anything. Beware to those countries and leaders who go along with this farce!

This NATO war against Libya is illegal. It was only supposed to be a no-fly zone and even that was agreed to under false pretenses. Since the entire operation was approved due to false pretenses, it is illegal and must be stopped immediately.

There is no doubt that besides oil, water is a crucial resource particularly in the Middle East, as the 2006 war against Lebanon by Israel was a water grab by Israel. No doubt the fascists would like to seize this wonder of the world under the Sahara desert in Libya.

Unless the people on this planet descend upon their leaders like an avalanche, they will continue to act with gutless cowardice. It must be demonstrated that the wrath of the people will be more terrible than anything the Empire can concoct.

Failing to act, to speak out, is cowardice. There is a moral obligation here to contact one's leaders, to contact the United Nations missions of the various countries, particularly those countries that did not vote in favor of those UN Resolutions so that maybe they might take notice at how costly their cowardice will be for not using the power of the veto.

Demand that NATO be dragged before the UN to answer for its crimes and the flaunting of international law.