Oslo is in Norway, Tripoli is in Libya = no connection 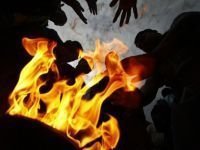 Before they try to link Friday's blast in Oslo with Libya, do not let them get away with any more lies. Do not let NATO shape public opinion with any more nonsensical manipulations of facts so as to whitewash their murderous acts of greed. Before NATO starts using Oslo to accuse Libya, please read this piece.

As soon as I head of the bomb blast in Oslo on Friday afternoon, I said to myself: "OK now watch them link this to Libya. Watch them present the story, then slide it in beside the Libya story to create a sublime association, then after that to start asking experts questions if they thought Libya was involved, then concoct blatant lies and present them as facts".

I have information that such a bullshit story is already being presented in the United States of America by some spokespersons from some Centre for Strategic Intelligence Studies. For every crime, there is usually a motive and in this case, this particular piece of nonsense has a very clear motive: To galvanise smaller countries to join the fight against Libya by presenting Oslo as a Libyan initiative.

It was not. For a start Colonel Gaddafi himself had said he would not take the war to Europe, because he would "give them time to think", before anyone starts misquoting his defiant speech of two weeks ago.

And before anyone starts bandying around names and accusations, there is such a thing as LIBEL and those engaging in attacks without any evidence at all will be liable for prosecution. I have already been passed the name of a man who has claimed responsibility for the attacks and he is not a Libyan. He is from the Balkans. He has links to Afghanistan and wants the Norwegians out. Unlike the guttersnipe press, I will not reveal a name I am not sure about and shall investigate it further until I have hard evidence.

There is also chatter on the internet about the possible involvement of a French Jewish gentleman whose name I also have. His movements in the last two weeks should be easy enough to follow. However, once again, I do not engage in libel. Let us examine NATO's recent history and check their credibility before they start the mud slinging:

Before the illegal attack against Yugoslavia in 1999, they insinuated that the Serbian authorities were attacking ethnic Albanian civilians. There is a difference between an innocent civilian and an armed terrorist belonging to the KLA, which NATO helped launch just like NATO helped launch the Mujahedin movement in Afghanistan which morphed into the Taliban.

Before the attack on Iraq, they lied that Baghdad was trying to obtain yellowcake uranium from "Nigeria". Wrong country. It's Niger and the documents were forged according to the IAEA. Then they said Saddam Hussein had Weapons of Mass Destruction. So, where are they then?

They lied at the UNO building in New York saying they had "magnificent foreign intelligence" about Iraq's WMD, which turned out to be a document copied and pasted from the net, ten years out of date.

As for Lockerbie, before they start resurrecting that story, there is a wealth of evidence contrary to what was claimed regarding Libya, namely involving other countries and their intelligence agencies. And if they bring up the IRA again, why, who was NORAID funding? Google them up.

And Google up "Libyan rebels", call up on "You Tube Libya rebels atrocities war crimes".

The Libyan authorities have taken great care not to involve civilians, the civilians look to the army as freeing them from the terrorist scourge which commits atrocities in the few (and fewer and fewer) towns they hold, the terrorists themselves opened fire on civilians to blame Gaddafi. This has been documented. NATO lied about Libyan air strikes against civilians, there were none. The Russian satellites scotched that story from day 1. The western media lied about air attacks on civilians in Tripoli, when asked to show them, they couldn't find any, not even hours after the supposed "attack" when taken to the place they said it happened.

Now, do not let yourselves be duped by another false flag operation especially now when NATO is getting desperate and is looking to involve other smaller countries in its war. In the forthcoming days, maybe Oslo will not be alone. It sure as hell won't be Libya involved.

Finally, ask yourselves another question: Why at the end of 2010 were 40 top French executives spirited to Benghazi? Was it to defend civilians from being attacked? And why didn't NATO accept Muammar al-Qathafi's offer of a free and fair democratic election monitored by the UNO? Because they support democracy? Or terrorists to gain them oil contracts?

Never ever believe a serial liar. Pass the word round.