NATO mistakes Muammar Gaddafi for the gutless wonders they are 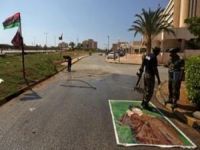 Part of the massive mainstream media campaign of lies and disinformation is the attempt to declare that Muammar Gaddafi is going to agree to go off somewhere into exile, which couldn't be further from the truth.

It is the slimy, amoral, soulless, gutless wonders of NATO trying to project their own personal cowardice onto a man whom, frankly they are not fit to lick the dust off of the bottom of his shoe.

Evil people like those of NATO are always incapable of seeing the personal qualities of others, those that they themselves never possessed. It takes a certain kind of person to murder a child, to destroy a way of life, to irradiate an environment for upwards of 4 billion years with depleted uranium. To insanely conduct well over ten thousand bombing missions like a crazed lunatic on an overdose of amphetamines.

"...according to the Sunday Times, European officials have cooked up a plan to banish him to Malabo. It's a question of Equatorial Guinea making him a serious offer, a source told the paper. We think that he might accept it."

The most ridiculous thing I ever heard, at least since the Venezuela story. Naturally, Colonel Gaddafi categorically rejects any such plan.

The international community also needs to be put on notice as to its responsibilities towards UN Resolutions 1970 and 1973. The main thrust of action for those resolutions was for the protection of civilian life in Libya. This must not be forgotten.

Given the following statistics, action against NATO is called for.

From March 19th until July 8th, 1,108 Libyans were killed by the attacks of the North Atlantic Treaty Organization (NATO) and 4,537 were injured, of whom 717 were seriously injured, reports the Ministry of Health in Libya and reported by TeleSUR special envoy on the North African country, Rolando Segura, through their social network account on Twitter.

Therefore, the international community is put on notice that since deaths, injuries and destruction to civilian infratruture are being caused by NATO, countries should begin to implement plans to provide the government of Libya with all means of air defense weapons, as well as other weapons designed for self defense, in order to prevent further NATO attacks.

This has translated from a short war of conquest to a war of desperation. NATO has not and will not achieve its objective of conquest. NATO is now a wounded beast, dangerous because it is dying and striking out, just for the sake of striking out and killing and destroying whatever it can without regard to international law.

They murdered the son and young grandchildren of Muammar Gaddafi, as well as the family of one of Libya's heroes, that included children.

"I never knew garbage could fly."

The world needs to do more than seethe with contempt and hatred for NATO and its murderous blitzkrieg.

It is immoral for any country to stand idly by and not provide Libya with all means of self defense in the most expeditious manner possible. Get those S-300s rolling! If your country fails to act, then you are equally responsible for the murder of civilians in Libya.

Colonialism is dead. NATO has lost the war. There will be no regime change, but free and fair elections, including giving the people of Libya the choice to continue with the current government. Their wishes are the priority.

Now is the time for healing and restoration. Libya will defend itself until a ceasefire is declared, with no preconditions of surrender by the people of Libya to the Hitlerite nazis of NATO.

This war must end like the last big war, with the utter defeat of fascism and the hanging of war criminals. Wash your necks, Obama, Sarkozy and Cameron. However, you may also choose the gunshot to the mouth in the bunker scene as well. Especially you, Monsieur Napoleon.