Is NATO arming the Libyan "rebels"? 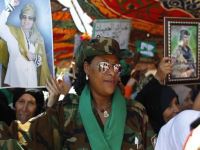 Reports are coming in of a vessel carrying weapons, some fabricated in the United States of America, together with 500 mercenaries, sailing through the Suez Canal towards Libya. Certainly, western mercenaries have been captured. After a number of western lies have been uncovered, we see the truth coming out of Libya as we expose NATO's lies.

It is by now obvious that NATO is desperate. The more desperate its plight, the more questions are raised: How many children did they kill last night? Do the British, French and American populations sit back while their countries' armed forces bomb Libyan people daily because of oil and act in support of terrorists? How do the Americans feel about their President supporting terrorists who have connections to Al-Qaeda? Has David Cameron made yet another monumental misjudgement? Now we have reports of illegal arms being shipped through the Suez Canal. Where is the truth?

As those of us who have ourselves been involved in active military service, or have reported on military conflicts, know only too well, a flashpoint involving live ammunition is a source of a crescendo of information from both sides, the epitome of exaggeration and disinformation, either due to high adrenalin rushes, the desire for success or the need to demoralise the enemy.

In this column I am not going to get involved in spreading rumours I cannot back up because I have no way of confirming the information. What I can do is to continue to work diligently and with humility behind the scenes reporting the truth about Libya using my sources in the country, using the people I know personally living in Libya.

We have already established, and the international media in general has started to see for itself, finally, that there are at least two stories in this conflict, and more and more, the international media converges on the position defended from day one in this column (why it took the Left so long to get itself organised is beyond me). This position is that Muammar al-Qathafi is not hated by his people, he is not a dictator, Libya's Jamahiriya is their form of democracy and is far more representative than western Parliaments, Colonel Gaddafy has done a tremendous amount for Africa and for his people and NATO started this episode by arming and aiding and abetting the "rebels", namely Islamist terrorists, separatists, racists and opportunists mixed with the worst form of scum from the dregs of Libyan society.

Their military leader al-Hasidi himself boasted about having links to Al-Qaeda, their civilian leader Mahmoud Jibril was the one who twice voted for the death penalty for Bulgarian nurses working in Libya, a penalty overturned by Muammar Gaddafy.

Enter NATO on the back of false flag events staged by themselves and by their pet terrorists, massacres committed in the streets and blamed on the Libyan Government Forces, which denied the accusations from the outset and which invited the international community to see the truth for itself.

Now, as I said I am not going to engage myself in peddling any old rumour I glean from the Net, but let us examine some of NATO's lies and see where the truth does not reside. Firstly, it was the stories that the Libyan Air Force was bombing civilians. The Russian authorities claimed that their satellites disproved this as a lie. Lie number one. When SKY News was asked by Saif al-Islam al-Qathafi to take him to areas which they said had been bombed, he proved them wrong and the answer was an embarrassed admission he was right. Lie number two.

So much for the beginning of the conflict. Then there were stories of atrocities committed by the Libyan Armed Forces, which then turned out to be the opposite - time after time, areas liberated by the Army found civilians with open arms welcoming them from the scourge which had terrorised them, raped them, torched buildings, killed people in the streets and pillaged. This scourge is what NATO calls the rebels and what everyone else calls terrorists or "rats". Lie number three.

There followed allegations of rape because condoms had been found in the mountains along with Viagra pills. As I said at the time, you do not bother to wear a condom if you are going to commit a gang-rape and you do not trample a Viagra pill into the soil, you swallow it. International NGOs derided this rape story also as poppycock. Lie number four.

Then there were stories that the Libyan Armed Forces attack civilians at will. Quite the contrary, the ones massacring civilians and slitting their throats are the terrorists which NATO's Cameron, Obama and Sarkozy support (why are they siding with terrorists?), the ones dropping bombs on homes and slaughtering kids are NATO. Lie number five. The Libyan Armed Forces are careful to call to their adversaries to lay down arms and to give the civilians time to clear out of the area before they begin to sterilise it. Where is this in the international news?

And now, the claims in the international press - on July 18, that Brega has fallen. There is video evidence that it has not. There are reports on the ground that up to 500 terrorists were slaughtered as they tried to take it, there are reports that this massive defeat has sparked off pitched battles among Islamist clans in Benghazi itself. Such reports we cannot confirm because we are not on the ground but after the lies NATO and their terrorist friends have produced...? I have just received first-hand evidence from a Libyan officer on the front line saying the terrorists have been cleared way out of Brega to the East.

Finally, allegations that mercenaries from France, Britain and Qatar have been captured by the Libyan Armed Forces. These are boots on the ground which is illegal under UNSC Resolution 1970 (2011) and allegations that a vessel full of equipment and specialist troops is on its way through the Suez Canal to Libya. Again, these are as yet allegations but would anyone be surprised?

It is illegal to take sides in an internal conflict, it is illegal to aid and abet terrorists. Therefore, the evidence weighs heavily against Messrs. Cameron, Sarkozy and Obama, three sickening protagonists who along with their whores in the Middle East, goats who allowed themselves to be drawn into slaughtering fellow Arabs by foreigners, are violating international law.

NATO's exit strategy is to claim the no-fly zone (which was never necessary in the first place) has been implemented and to allow the African Union to mediate, allowing the Libyan people to decide what to do. Colonel Gaddafy himself proposed a democratic election which NATO refused. It is obvious, then, that this is not about democracy, now, is it?