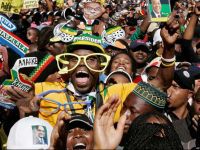 The United Nations Organization and the international community remember South Africa's historic hero of humanity Nelson Mandela this July 18 but let us also remember the Brother Leader of Libya, Muammar al-Qathafi, whose tremendous help in the fight against apartheid - and not only - made a difference.

To say there would have been no Nelson Mandela without Muammar al-Qathafi may be an exaggeration, because Nelson Mandela was born first. However, Muammar al-Qathafi's contribution to the African continent is second to none, operating in two phases: first helping to liberate Africans from the yolk of slavery called colonialism and imperialism and secondly, in modern times, implementing the African Union.

He helped to counter the notion, nurtured by a hostile western press, that Africa was doomed, a dark place of diseases and disasters, humiliated and humbled, used to accepting morsels from former colonial masters as they "helped" Africa with equally humiliating interest payments making sure the Continent was dependent and that there was a one-way street for African resources - outwards.

He helped Africa build its institutions so that African problems could be solved by Africans for Africans and he helped to set Africa free by standing it on its feet with pride, with honour, setting up telemedicine programmes, setting up e-learning programmes, pooling resources and liberating the continent from crippling payments to foreign banks.

For all of this, and especially today as he faces the most savage act of outrage against international law, against civilisation and against human dignity and decency in recent history, proudly standing up to NATO's bombing as it sides with the terrorists it unleashed inside Libya - to remove Colonel Gaddafi and therefore to pull the carpet from under the African Union - for all of this as we celebrate with joy the birthday of Nelson Mandela, let us this year remember Muammar al-Qathafi and let us remember his humanitarian record for which he was to receive a UN prize in March, let us remember his development of Africa.

That said, let us pay homage to his dear friend Nelson Mandela and remember his words 21 years ago in Tripoli:

"No country can claim to be the policeman of the world and no state can dictate to another what it should do. Those that yesterday were friends of our enemies have the gall today to tell me not to visit my brother Gaddafi. They are advising us to be ungrateful and forget our friends of the past."

Let us celebrate another year of Nelson Mandela's heroic contribution to human rights, to race rights, to his fight for freedom, as a prisoner of conscience and international peacemaker - and let us remember that he came through his years of imprisonment without rancour and without calling for revenge and hatred. The Rainbow Nation - South Africa - owes a huge debt to Nelson Mandela and the rest of the world would do very well to take a look at these two great men - Mandela and Gaddafi, and instead of bombing and lying, take a leaf out of their book.

Nelson Mandela will go down in history as the man who provided a shining example of how to build communities with different races living side by side in hope. Muammar al-Qathafi has provided us with a shining example of how to free a continent, give it dignity and a voice in the international community, how to free a continent from slavery and give it glory and self-esteem.

Nelson Mandela leaves a legacy for the world to follow - how to forgive and forget, how to form a new community through a peace and reconciliation process. Muammar al-Qathafi's Jamahiriya, based on his Green Book, should be part of a programme of compulsory study in all secondary schools because it also provides an example for good governance of all societies.

Now a message to NATO: You insult those in the international community who follow these great examples of great men whose legacy will last far, far longer than your leaders, you who will go down in the annals of history as a clique of cowards controlled by the energy, weapons and banking lobbies which pull your strings. You have contributed NOTHING to Africa, not even to your own continents. All you have done is sow misery, destruction and bad will. May God curse each and every one of your souls and may you all rot in the depths of Hell for eternity, you snivelling, disgusting and revolting specimens of humankind.

Here is your get-out strategy: The no-fly zone is implemented. It is now patently obvious that it is the Libyan Armed Forces protecting civilians from being raped and slaughtered by the terrorists you unleashed in an internal conflict which you created to get your hands on Libya's energy and water and monetary resources. Get out while you have any dignity left and allow the African Union to help mediate.

Today we remember and honour peace and reconciliation. All NATO does is insult these two noble precepts by sowing death, destruction and hatred.

Long live the legacy of Nelson Mandela and Muammar al-Qathafi!