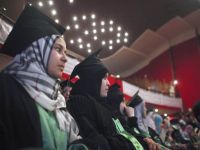 Ban Ki-Moon makes me laugh. In fact, he makes me curl up giggling helplessly with my finger pointing at the television screens in my editing room because he cuts such a ludicrous figure. On one hand he has such a serious expression on his face that I am sure he wears suspenders under his trousers and on the other, he spends his time talking about peace and how the international community must get along, but where the HELL was he when NATO was ganging up on Libya?

Where was the UNO when Colonel Gaddafi's three grandchildren were murdered in their home? So much for the United Nations Organization, which sits very well in New York. Figures. Its HQ isn't even in a capital city and it doesn't represent the international community. It represents the business interests of the USA, making Mr. Ban Ki-Moon a pathetic little puppet jerking around like an automaton with his strings pulled.

Moving on to the international community, why are the UK and France (and now Qatar) continuing to conduct military operations inside Libya when it is more than clear for anyone to see that the Libyan Armed Forces were never attacking unarmed civilians but rather, defending them against armed terrorists? Is siding with terrorists in an international conflict paramount to conducting an ethical foreign policy?

As regards those leading this murderous campaign (in which over 700 civilians have been murdered by NATO aircraft according to the Libyan authorities) why are they so obtuse that they cannot see from the photographs themselves that those fighting the Libyan Jamahiriya are separatists, terrorists and Islamist fanatics, when anyone who sees the wealth of videos and photographs of the "rebels" can see for themselves? Are Cameron, Sarkozy and Obama thick, or stupid? While attempts have been made to suppress information on the Internet, anyone can Google up "Libyan rebels" and then "images" or "you tube Libyan rebel war crimes".

So, we have an inept UNO - a freakin' joke, led by a freakin' joker - and as usual, a totally untrustworthy NATO, pandering to the whims of the arms and energy lobbies, murdering civilians as it blows self-righteous "policy" soundbites through the windpipes of the leaders of its member states.

And now, to cap it all, BBC asking the British public to make donations for the Horn of Africa, where ten million people are starving to death, exactly when their Prime Minister, Cameron, is spending millions of pounds every single day on his bombing campaign in Libya (up to 100,000 USD per aircraft per hour plus accommodation, salaries and overheads). The same man has seen Northern Ireland blow up again in his face - the province where there are now 165 active dissident terrorist operationals - he has the police marching on the streets saying his cuts will raise crime, he has the teachers on strike, he has the students up in arms because he tells them he cannot afford to pay for Universities but has money for bombs to support terrorists...

And precisely the man they are attacking, Muammar al-Qathafi, is the person who has done most to help the African continent. His e-learning and telemedicine programmes cover everyone on the Continent, his Institutional aid has seen Africa and Africans freed from the yolk of colonialist-type debt strategies imposed by western banking institutions and his multitude of projects are seeing Africa solve its own problems. If anyone could solve the problem in the Horn of Africa, it is Muammar al-Qathafi. And they are trying to kill him.

Hasn't anyone noticed there is something wrong somewhere?

Photo: AP Libyan women graduates. Cameron, Obama and Sarkozy support the terrorists who wish to impose Sharia law. If they win, these women and others like them will probably be decapitated. Nice one, Barack! Jolly good, David, eh what?