Portugal and the macro-economic madhouse called the EU 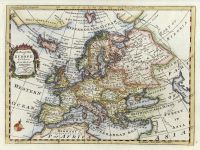 oody's has reduced Portugal's credit rating to junk status, meaning that if Fitch and Standard and Poor's follow suit, Lisbon will be faced with a crisis. Another one. What sort of a system is this where tangible results can be visited upon a sovereign nation and its people by an unregulated agency on the other side of the Ocean?

True, Portugal is in trouble because generations of politicians mismanaged the country since the revolution in 1974, either through crass stupidity or more often through lack of vision and the inability to plan strategically. The years that followed the adhesion to the EC in 1986 saw Portugal modernise greatly in terms of infra-structure but lose tremendously through trade-offs which saw the farmers paid not to produce, which saw Portugal's industry and fisheries destroyed, as quotas went elsewhere.

So much for the history. Now for the present.

This in turn has created a situation whereby nearly 30% of young people in Portugal are unemployed because they have no jobs to go to, and without working, they are not entitled to unemployment benefit, resulting in the fact that most of them feel like a spare piece of anatomy at a wedding and those who can, are leaving. This, despite being in general terms admirably well prepared by an excellent public education system.

The Portuguese population has just voted for its new government, in a free and fair democratic process. The government has been formed, the ministers are in their posts and have started getting down to work. Party politics aside (whether or not one is a member of the parties voted into office, one has to give them a blank sheet of paper to write their epitaph upon), the new Prime Minister, Pedro Coelho, has promised transparency and has taken concrete measures to assure that this is achieved, setting up organisms to watch the national Accounts Court and to check on the workings of the Ministries.

The measures imposed by the "troika" for the financing of Portugal to pay its debt are being implemented to the letter, and special measures are being taken. The hard-pressed and beleaguered population of Portugal has already been informed that a part of the Christmas subsidy will be retained - a drama for many families who rely on the 14 monthly salaries (an extra one at Christmas and for the holiday month) to make ends meet.

However, the general feeling inside the country is that if this is what is necessary, then obviously, although people do not like it, they are prepared to go along with it (so long as everyone pays and not just the middle class, as usual). So far, so good. Now what?

So now what worse possible moment could Moody's choose to lower Portugal's credit rating, before the country has had a chance to adjust itself to the moment - namely, the implementation of the terms of a bail-out to help it through its sovereign debt crisis? It is almost as if Moody's is creating - on purpose - the conditions for Portugal to fail to reach its objectives and default on the forthcoming payment of its national debt.

In fact, let us reiterate that in plain language: Moody's, and the other two ratings agencies mentioned above, are evidently the Rottweilers acting for the USA, constantly chipping away at the Euro to create instability to stop other countries trading in EURO and to continue trading in USD, a policy tailored carefully to allow the EURO to continue as a strong currency, keeping the USD relatively low so as to stimulate US exports and hinder those from the EU. Portugal, Greece and Ireland are the jokers in their pack of cards in this sickeningly cynical game of macro-economic chequers. It is not about destroying the EURO, it is about keeping it unstable.

Do we have to accept this?

I will postulate two strategies: either someone starts to regulate these agencies and to explain exactly how they reach their conclusions or else suppose the economists in this world did what they are paid for - for once - and came up with an alternative system, since this one obviously doesn't work?

Who the Hell are Moody's, Fitch and Standard and Poor's to dictate to me in my country of residence how much my sovereign debt is worth and thereby directly affect my standard of living, my pension funds and the futures of my children? Given that the European Union is so adept at imposing and implementing structures and systems on its citizens (without bothering to ask our opinion, of course), supposing the EU banks created an internal system where Moody's and company do not enter?

Suppose Portugal and its friends who find themselves in this deplorable situation thought very seriously about leaving this idiotic Eurozone system and went back to a proper currency such as the Escudo - not that tinny little coin of the  - make-believe stuff from a game of Monopoly, but the nice, heavy ones that used to feel like real money?

And if Europe doesn't like it, then suppose Portugal remembered it has the tenth largest Goddam Exclusive Economic Zone in the world, has Portuguese-speaking countries spread out across the five continents and has something called the CPLP to trade with, which includes Brazil, Angola, Mozambique, Cape Verde, São Tomé and Principe Isles, Guinea-Bissau, Portugal and East Timor, not to mention goodwill to be exploited in former enclaves such as Goa, Daman and Diu?

So Moody's, go ....yourself. Portugal needs you and your friends like a dose of syphilis.