Can Media irresponsibility be reversed?

Jakobskind: why the media is silent about Libya, Strauss-Kahn

Libya remains an impasse. The daily bombings by the North Atlantic Treaty Organization (NATO) did not achieve the goal of finishing the government of Muammar Gaddafi. With the complicity of the media around the world, Gaddafi is being blamed for a series of human rights violations. 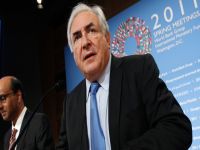 The International Criminal Court decided to order the arrest of the Libyan leader, accusing him of killings and other violence. For example, he ordered his soldiers to rape women. While such information is circulating around the world, the British newspaper The Independent published an Amnesty International report exonerating the regime of Muammar Gaddafi from such incriminating charges, and that the rebels have the support of NATO.

All the denunciations about violence by Gaddafi government forces have fallen to the ground. They can be considered made from the same mold of the schemes that preceded the invasion of Iraq, such as weapons of mass destruction that never existed. All because of oil. Amnesty International has found evidence that on several occasions the rebels in Benghazi deliberately made false statements and distributed versions lying about crimes committed by the Libyan government.

It is worth remembering the series of warnings issued by the Secretary of State, Hillary Clinton, who clearly plays the game for the military industrial complex. She based the charges against Gaddafi on "reports" invented by the rebels, but as the reports of Amnesty International have been little publicized, Hillary is still ahead in the media market, which helped, as at other times, the gold plating of Americans.

I mean, the farce against Iraq is being repeated with Libya. In spite of the justifications for the daily bombings by the North Atlantic Treaty Organization, which some TV channels mistakenly repeat, either through ignorance or ideological choice of the Western Alliance, the fact remains that they invented pretexts to intervene in the North African country.

It is inconceivable that this practice is repeated on all areas of the planet where there are riches coveted by the United States and other industrialized countries. And even worse: smart bombs hit civilian targets and cause deaths in the name of "humanitarian intervention."

After the report of Amnesty International, it is hoped that international bodies like the UN, at least investigate impartially, and even review the position taken against Libya. Or at least enact a ceasefire, as suggested by former President Luis Inacio Lula da Silva at a meeting with representatives of African countries.

None of these three suggestions will be done, and they will keep on giving a pretext for the bombings. The credibility of the organization is going to minus zero. It is now at zero, but if it enters the next level, it might recover credibility.

What would they have to say about all this, President Dilma Rousseff and her foreign minister, Antonio Patriota? After all, NATO, with the seal of the United Nations, commits serious human rights violations. To temain silent is supporting and approving the practice. Because the Brazilian President herself has already made it clear numerous times what the position would be if they commit human rights violations.

But we must be careful not to fall into the the U.S. trap which blows the whistle only against countries that don't do the play of the White House. Saudi Arabia, ruled by a royal family and ally of Washington, that always violates human rights, is not condemned or even mentioned by the United States, just as the entry of Saudi troops to quell protesters in Bahrain was accepted as a normal fact.

And in the episode concerning Dominique Strauss-Kahn, after some analysts were denouncing him, a part of the truth began to emerge. The media market had already in advance condemned the Frenchman, in another demonstration of journalistic irresponsibility. The second version now appears according to which the maid wanted to extract money from Strauss-Kahn. It is emerging as the tip of the iceberg of a story that might have even greater political implications than previously imagined.

Although Strauss-Kahn was a representative of the financial world, according to experts, he had displeased,the market in statements or issues related to international finance. There will be no surprise that soon after some kind of interference by intelligence and secret services comes up. And in the place of Strauss-Kahn, French Finance Minister Christine Lagarde was appointed, of an absolutely conservative line. Mission accomplished for the radical defenders of the god of the market.

The case deserves to be thoroughly investigated because of the fact that this maid has ties to mobsters, according to police in New York. This does not eliminate the participation of some secret service, such as the CIA, for example, that often uses tricks like this and other types not readily apparent. And, as the newspaper The New York Times reported, we have the emergence of $100,000 in the bank account of the maid, which may have come from who knows where.

The corporate media market runs irresponsibly behind the audience to raise more advertisers and gorges itself enough to exploit the case. They have to do an immediate self-criticism. And in that sense, it would now be worth putting into practice a kind of investigative journalism to clarify definitively what lies behind the case. The question is whether there will be a political will to do so. Or if the New York Police Department will have an interest in disclosing facts behind the scenes.