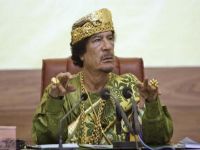 Rumours are flying around about NATO offering an under-the-table deal to Colonel Gaddafy to step down and receive a declaration of immunity in return. This brings two notions into play: first, NATO's word has as much credibility as a spiv in a shell-suit and secondly, have those behind this ill-conceived crusade finally seen the folly of their actions?

When you receive an offer from NATO, there are two things you should do: remember the guy in a scruffy raincoat who hangs out behind the local train station hissing at passers-by: "Hey man, you wanna buy a second-hand Romanian wristwatch?" and secondly, say No!

Why? Because NATO has lied time and time and time and time and time again. NATO lied to Russia, stating it would not move eastwards and encroach into former Warsaw Pact countries and look where it now stands - encircling Russia from the Baltic States to the north, down through Poland to Bulgaria to the west, Turkey to the south and as if that was not enough, is making overtures to Georgia, a thorn in Russia's side as was so admirably demonstrated by Tbilissi's act of slaughter not so long ago (Summer of 2008).

The fate of Georgia, it is true, would be the fate of NATO if it tried anything on, namely a hail of missiles so thick they would blot out the sun before a crater twenty kilometres either side of a military build-up appeared on the other side of Russia's borders. As the Georgian troops and their military "get back inside" (Southern accent) advisers found out, the Spetsnaz are a force to be reckoned with, as are the soldiers from the Chechen divisions, the darlings of the West, as the western mercenaries among the Georgians felt only too well.

The same nations invented barefaced lies to create a casus belli against Iraq, where none existed, lying that Saddam Hussein's government had tried to get yellowcake uranium from Niger, then forging documents to back up the claim, then getting their (pig-)ignorant media to claim Baghdad was trying to obtain it from (wrong country) Nigeria; then there was a doctoral thesis copied and pasted from the Net providing "wonderful intelligence" for Colin Powell to present to the UNO. We had chemicals factories which were providing milk for babies and we had evidence of WMD and pinpointed locations as to where it was, except it did not exist. As Saddam Hussein himself said.

We had the media demonising the Iraqi President and tying him to Al-Qaeda, even though he and bin Laden hated each other. Meanwhile we have had NATO countries complaining about cyber hacking yet doing the same thing themselves time and time again against Iraq, against Iran and now against Libya.

And now we have NATO lying about the casus belli in this north African state, claiming that poor innocent unarmed civilians were being attacked when what really happened everyone knows - thousands of armed terrorists, unleashed by NATO itself, ran amok torching government buildings, raping girls and slaughtering people in the street. They never mentioned the UN Report providing the basis for a humanitarian prize to be awarded to Colonel Gaddafi in March this year, they never mentioned any of his many actions in the African Union, providing services for free whereas beforehand, Africans had to pay fortunes for the same to western providers.

NATO, the same gang which organised the kidnapping of Slobodan Milosevic and his illegal detention in The Hague, its kangaroo court which has not yet tried a single NATO member for war crimes, despite tremendous evidence towards this, now makes overtures to Muammar al-Qathafi to stand down and accept immunity.

Muammar, believe that and you may as well give a million dollars for that second-hand Romanian wristwatch.

The fact of the matter is NATO sees what is happening in western Libya, sees that Gaddafy is genuinely popular there as indeed he is with most tribes across the country and knows that in military terms, their crusade has failed, miserably. They never expected to be spending 50 to 100,000 dollars per aircraft per day, flying 100 sorties a day, in July 2011, they never expected the Libyan Armed Forces to have weathered the storm and gone onto the offensive against the terrorists NATO supports.

Once again, the way forward is for NATO to disengage, claiming the no-fly zone has been imposed and to allow the African Union to broker talks between the sides without making offers, neither did anyone ask for NATO's opinion. Nobody should believe them because given the recent history of this organization, NATO has as much credibility as a heroin addict desperate for a fix.