Aleida Guevara denies that the regime holds political prisoners and said she does not respect the "ladies in white" opposition. She says the economic changes underway on the island can modify the social consciousness of the population 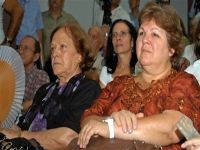 She declares that she is just a militant base of the Cuban Communist Party, but she carries the surname of a myth of the left. At age 50, the pediatrician, Aleida Guevara, is occupied in taking care of her father's memory and makes a fiery defense of the island model.

In this interview, she expresses her fear that the current reforms in the island, which allows the sale of real estate and cars, affects the social consciousness of the population. In Brazil to give talks, she speaks about politics and the legacy of Che Guevara.

Folha - How are things in Cuba?

Aleida Guevara - We seek to solve problems. The state cannot continue supporting those who work without producing. When we lost the European socialist bloc, Cuba suffered a brutal crisis, that the State had befriended all throughout this time. The situation of the domestic economy has improved, so there is potential for people to work independently.

The possibility of private ownership of property and cars opened. Let's say that it isn't private property. If I had paid for a car, it was mine, but I could not sell it. Now I can legally.

You don't think this conflicts with socialist principles?

No. The State is still socialist because there is no privatization in the means of production. It is not touched and it isn't going to be touched. The Cuban people remain the owners of all that is produced in the country.

The question is not about selling your home or your car, which is good and we can do freely. The question is that there are now workers who are self-employed. They will do what they do for their personal benefit. My personal fear, as a citizen, I have nothing to do with the direction of the Cuban government, I am a doctor, is that people who start working for themselves lose a little social conscience. This person only thinks of his own life. They live only interested in improving their home, clothing, having money in their pocket, and forget that the children's school at the corner needs a coat of paint.

How does the Señora respond to the claim that Cuba is a dictatorship?

It's total lack of knowledge about Cuban reality. We have popular elections, much more democratic than those of any other country. The people directly elect their candidates from the base.

But the party is unique.

The party has nothing to do with elections. The party is the leader. Elections are from below, of the people.

There are no problems for the renewal of leadership?

The Cuban people know their own people. They want for them to keep working. If they have done well so far, why change? We are confident with Raul.

How do you justify the opposition, political prisoners?

Political prisoners are imprisoned for ideas. In Cuba, no, they don't exist. There are persons imprisoned for actions against the people, like putting poison in the water of a school, trying to burn down the phone system. It's terrorism. There are mercenaries paid by the U.S. and Europe to pass to the FBI information that damages the country

And the ladies in white?

They are a shame for me as a woman. What do they ask? Let murderers, terrorists, who attacked the economy of their own people, mercenaries who have sold out to the interests of the U.S. and Europe be free?

Because they do not value the society that takes care of the person from birth until the end of life? Where education is free, no matter if you are lady in white, black or green? I cannot respect them.

Is there democracy in Cuba?

Democracy is people power. And a State of rights for all citizens. It exists in Cuba. What people say is what is done. The people always have the last word.

The embargo didn't change with Obama?

We believed that Obama would have other perspectives, but we were wrong. He responds to the interests of big industry. He promised he would close the base at Guantánamo Bay, and that has not happened yet. They keep on having illegal prisoners in our territory. This base is territory stolen from Cuba.

Some say that the Arab Spring can reach Cuba. Does the Señora fear that?

It's very different. The Cuban Revolution is based from the people. In the Arab world, there was no revolution from the base. Today, there are a lot of groups engaged in manipulation and bothered by a lack of power.

How to deal with the myth of Che?

Myth, no. When one speaks of Christ, he is very distant from humans, it is unclear whether or not he existed. Che cannot be converted into a myth. He was a man like any of us. That's what makes it beautiful, completely: being human, with all the problems and deficiencies, but he could be a better human being. What we want is to follow the example of his life, of action, honesty, integrity.

The Señora hardly knew him?

I was four and a half years old when he left for the Congo. I remember the last moments before the trip. My brother, Ernesto, was only a month old. I have an image of my mother with my brother resting on his shoulder. I'm below, watching the scene. My father is dressed as a soldier and touching with a very big hand the little head of the baby.

This image has always stayed in my retina. I'm a mother and I began to think at that moment, who knows of farewell. How much concern must he have with this baby, when he grows, would he understand why he was not there. [Cries, fighting back tears.]

And that moment makes me think of my father with love, with great force. He was a man able to love so tenderly and, at the same time, to follow his path, knowing that he was more useful elsewhere. It is the best example of a true man and a true Communist: to offer the best of his life in spite of himself.

Then there was another moment when he returned from the Congo, already in disguise. I did not know it was Dad. That night I fell, hit my head hard. He took me in his arms, protected me. In the end, I said aloud: Mommy, I think this man loves me.

It must have been very hard for him-he could not explain to me because he wanted me in a special way. But for me it was the best. When I saw that it was my father, I felt that I was loved in a very special way, and this is beautiful for any child.

This moment with the disguise is in Steven Soderbergh's movie. Did the Señora like the movie?

No, because my father doesn't see himself as a trainer of men. Walter Salles's movie [The Motorcycle Diaries] is much better, more real.

How do you value the memory of your father?

Many things are missing. One of the most important is that there are not enough publications for young people. Making them is one of the goals of Che Guevara Studies Center.

Career
Pediatrician, author of a book about Hugo Chavez

"We need to transform discouragement into hope and resignation into combativeness."