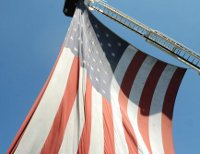 On July 4th, the USA is celebrating 235 years of independence. From a small state on the Atlantic coast, the country has developed into the world's most powerful nation, which dares to dictate its so-called democracy to other countries of the world.

Can the States be considered a democratic state indeed? Pravda.Ru asked expert opinion from Geidar Jemal, the chairman of the Islamic Committee of Russia.

"Well-known American writer Jack London referred to the organization of the United States as plutocracy in his novel "The Iron Heel". This term means oligarchy hidden behind a variety of masks. Can we say the same today? Has the life in America changed so much for the better in 100 years after that book was published? Is is real democracy?"

"Jack London deserved the title of a great American writer for that novel indeed. As a matter of fact, it was a book of prophecies. He wrote "The Iron Heel" in 1907, but he predicted the development of the country masterfully. He predicted the Chicago uprising, the Second World War, Pearl Harbor, and other things like the Patriot Act and what US special services were allowed to do towards private property and common US citizens.

"America has not been moving towards democracy during 100 years after the publication of that book. They have done their best to prove that Jack London was right in his assessments of the United States. This is not democracy, but the same old plutocracy, albeit under different conditions."

"But the States propagate their democracy as a role model for other countries."

"What kind of democracy is it? Democracy, in the classic perception of this word means "the power of the people." Where is this power? In Ancient Greece they used to have Areopagus, but they don't have that in the USA now. What they have is the two-party system, in which either Democrats or Republicans can win. They both represent the interests of oligarchy. This system is like a swing - it just moves back and forth and that's it, nothing else happens.

"It is also very important that the president is not elected by millions and millions of voters. The president is elected by certain electors. What kind of democracy is it if it has such tricks? There are many of such tricks there indeed. Why don't they introduce direct election? In the USA, we can observe the system of census voting, which was abolished in Europe in late Middle Ages. This system doesn't exist elsewhere except for the USA.

"To understand the deception, one may stop at most interesting aspects. The election of candidates takes place between the two parties only - the Democratic and the Republican party. Oligarchs promote their own people from the very start, and there is no place for someone else. The system of electors is a very good one indeed, because it is easy to control a certain group pf people. There are so-called indicator states, where the votes of electors are valued higher than in other states. To put it in a nutshell, even if 75 percent of people vote for, let's say, John, Michael will win anyway, even he enjoys the support of only a quarter of the population.

"Afterwards, they tell the American people: "We've decided here, whom you need, so you need to pick one of the two." This is how Bush won over Gore.

"The Americans are deceived by those who rule them. If so, what makes the US democracy better than in China or in the Soviet Union? The Chinese system guarantees a different leader in several years. The Soviet system would give people its leader without any tricks. In America, there's nothing but a show."

"The Americans say that nothing stops them from founding another party."

"True, they have a right for that, nominally. There are other political organizations in America, but only the chosen ones can nominate their presidential candidates. If you try to do something on the side, you'll fail. In the US election system, your candidate will not be able to become popular, even if you have bags of money. The US media are controlled by oligarchs - they publish and broadcast the things that common Americans need to know from the point of view of those oligarchs.

"They will simply ignore your candidate, and he or she will simply be unable to say anything to people. You can set up thousands of websites, promote your candidate in social networks and on millions of blogs, but it will not give you any result.

For decades, the States have a number of "voices of the truth." They are such behemoths as The New York Street Journal and The Washington Post. They are recognized as respectable publications. Smaller publications don't mean anything really. Look at the story of Wikileaks. This organization has been unveiling thousands and thousands of state secrets for three years, but no one knew of its existence. It came into spotlight only after The Guardian, a respectable British newspaper, paid attention to it.

"What about the institute of the president? Does it mean that the US president is just a protege of those groups, a product of compromise?

"It is partially true. The president, a helpless pawn of the oligarchs - this is a simplified Marxist vision of the situation. The situation is much more complicated. The institute of American presidency is not so simple as it may seem. They are trying to making everyone believe now that the appearance of Barack Obama proves that there is no consistent pattern in the appearance of this or that president at power. However, this "African spot" on the body of US presidency is not something outstanding. Barack Obama is a very distant relative of the Bush's.

"The only outsider among all American presidents was Kennedy, a Catholic, who stopped a bullet. All others were demonstrating the Anglo-Saxon succession on the protestant spiritual basis in connection with best names of Great Britain.

"There were presidents in the history of the United States, whose activities proved that they were ruling nearly independently. But there were others who would be given a rap over the knuckles. One should bear in mind the fact that if a president goes in the wrong direction, special structures will get involved to impeach the president.

"Carter was not allowed to do anything. Even when he went on an adventure in Iran, he had to ask an oligarch for money, he could not spend the state funds.

"As for Obama, it is quite possible that this is just an interim figure. Obama relies on the European lobby, he plays the role of a mediator between old Europe and neoliberalism.

"What is the role of the American parliament?"

"The US parliament does not generate ideas. The parliament simply receives the decision that need to be approved. Just look at its actions when America was extricating from the crisis. As for the "congress-president" link, we do not see a democratic achievement here. It is only a structure of relations between collegiate structures to demonstrate the visibility of democracy."

"What about the publicized American judicial system?

"American justice stipulates bureaucracy with the rule of lawyers and judges who are also placed under control. This happens, when they want to play the game of democracy. When they don't want to play that game, we can see CIA prisons in other countries and the "democratic institution of Guantanamo."

"The independent American system uses sex as a weapon. Not sex per se, of course, but various sex crimes - from harassment to rapes. There were so many of such cases in the past, but the recent two are especially memorable. I am talking about the founder of Wikileak Assange and the former head of the IMF, Strauss-Kahn. They deprive a person of their position and just slander them as much as possible.

"This extra-legal system of suppression was discussed by a well-known writer Michael Crichton, the author of "Jurassic Park." He has another novel - "Disclosure" in which he tells the story of a female boss who was trying to have an affair with her male employee. When she fails to do it, she simply destroys the man. This is another vestige of the era of aggressive feminism, when someone is waging an open war against men.

"Let's remember the fate of another world-famous American writer, Stephen King. He has been under constant pressure from special services of the United States since 1978. The FBI constantly watches him because his works are regarded as anti-American. He is the only psychoanalyst in US literature, who unraveled the American psycho-type and exposed it to the general public.

"Nothing is eternal, as they say. How do you think the American state organization is going to evolve in the future?"

"This is a flexible and changing system, which is going to work effectively even during critical periods. The American state organization is very well prepared for such periods. They developed the plan of the so-called alternative administration during the Cold War era. According to this plan, the action of the Constitution is suspended, whereas the nation is administered by shadow figures. This is the so-called anti-crisis center.

"This structure was established in case the state of affairs inside the States is aggravated. Democracy is not the point here. The main point is to win and survive at all costs. This is only the tip of the iceberg, which the Americans let others know. There was a doctorate thesis written on the subject at the end of the 1980s. The part of the thesis, which the Americans left on the surface, was republished by Russian military media."