Greece: The beginning of the end, or a new beginning? 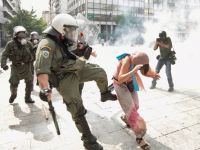 It is by now patently obvious that there are two languages being spoken in Athens: that among the political class desperate to keep the Euro-wagon on the road and that of the Greek people, who at this moment represent the hearts and minds of the Europeans, which spells out the message that we do not want this European Union.

Apart from not wanting this European Union, we do not want this system. They told us their system was better than the Socialist model, which provided free maternity care, maternity leave, free and excellent education and extra-curricular activities, free and excellent University or further education, a guaranteed job, a decent salary, subsidised staple foodstuffs, including drinks, subsidised or free public utilities, a free house, a free or subsidised car, social mobility, excellent and free healthcare, including dental treatment, security of the State, security on the streets, protection against drug addicts, porn and the filth that was practised in western countries, free or subsidised transportation, social mobility, a decent and indexed pension and free leisure-time activities, free or heavily subsidised medication and culminating with a free funeral.

They told us their model was far, far better. And what, pray, was their model? For a start, never did they ask us whether or not we wanted the Euro and rarely did they ask us if we wanted the EU or any part of it. In the few instances they did so, at best the vote was split 50-50 and more often than not, the poll was a resounding NO!, after which they cynically reworded the vote, altering the date to a sunny June summer's day when everyone would be at the beach and repeated the exercise ad infinitum until people gave up and the YES won - with around 13 per cent of the electorate. A classic example of anti-democracy.

And had this undemocratic European Union bothered to explain things to us and then asked us how we wanted to vote, we would have said Nein! Merci beaucoup! Or in plain English, Up yours!

Did they ask us if we wanted the Euro? Did they tell us that prices would more than double while salaries stagnated? Did they tell us that the convergence rates would now bind us together using parameters which might make sense in Germany but are nonsensical in an economy like Portugal's? If they imposed such measures, then why didn't they start giving German salaries to the Portuguese?

Oh no, they wouldn't do that, would they? They gave southern Europe northern European obligations without the tools to meet them then told northern Europe to pay for it. It is a lose-lose situation, being the fault of neither region but being very much that of the wonderfully colourful motley group of Eurocrats who glued this monster together against our collective will.

But that is not the end of it. They told us that in this wonderful capitalist system, the small trader had the freedom to start his own business and to employ people, making the economy grow, creating prosperity. Fine. But is this what they implemented? No, it is not. Look around you on the high street and tell me how many small traders you can see. Correct. Now deny that the Big Spaces have swallowed them all up, that the same Big Spaces negotiate supply contracts which favour not small local producers but the mega-sized food brokers who are selling foodstuffs at future prices, being the cheapest on the market, of what age and of what quality?

Coupled with that, the European Union destroyed the industry, agriculture and fisheries in many countries, handing everything to Germany, France and Spain in that order, destroying jobs down the line for future generations. True, the governments in power upon and just after adhesion to the EU are to blame but that does not help anyone now, does it?

And then what did they do? To compound everyone's misery, they started trading not in concrete commodities - oh no, that wasn't enough - they started trading in weird and wonderful products, SWAPS, futures and you name it, based entirely upon speculation, gambling our money away, and worse, taking out all sorts of insurance policies to guarantee what they now term "complex products". Complex, or downright stupid?

Because if anyone had bothered to ask the people along the way, those of us who know a little about these things would have stood up and explained to the others that what they were doing was bound to fail.

But we haven't finished yet. Added to this, these grey failed politicians called Eurocrats (who couldn't get a proper job at home and had to waste billions - I repeat, billions - of our money in Strasbourg and Brussels) not only spent all the money they had, deriding centuries of economic history based upon the Gold Standard but then started issuing sovereign debt, which amounts to loans for the future based upon an interest rate controlled by the credit rating of ratings agencies in New York (Standard and Poor's, Moody's and Fitch). Now, just how much more manic could this get?

This time let us be sensible. Let us ignore the fantastic ideas of those generations of Eurocrats which have put us in the situation we are in, imposing this madhouse upon us without asking our opinions and this time, let us do what the people of Europe want us to do. How?

Well to be frank, I believe the chair of economics in all Universities these days should be banished because if the economics courses are supposed to produce economists, who in turn have created this hell-hole they call market-oriented capitalism and now say there is no Plan B, because it is too complicated, then it doesn't say very much for them collectively, does it?

It is perfectly simple and not complicated at all. For a start let us stop all this nonsense about the possibility of Greece "going bankrupt". Greece is bankrupt, period. Otherwise it wouldn't need constant injections of billions upon billions in loans, which anyway it will have to pay back tomorrow at inflated prices. How is its economy supposed to grow at a rate which will mean that the same situation will not arise again, and again, and again? For the Greeks, impending disaster, under this system, is a given factor. For those who pay, well, how long are the northern Europeans going to see their hard-earned tax-Euros squandered in paying off Greece, or Portugal, or wherever, when "Sorry Mr. Brown, we cannot afford your cancer treatment because we've bailed out Greece, oh! and we've spent 300 million Euros supporting terrorists in Libya"?

So if the economists cannot produce a Plan B, then I will. Greece? Be a man, drop this Euro nonsense, tell the European Union to go stick it and go back to the good old Drachma, not the silly little coins they were using just before the Euro, but the proper Drachma, those nice chunky coins and those pretty notes which actually meant something.

OK? Now, having done that, pass a law accepting your debt in Drachma. Done that? OK now devalue your Drachma by half and lo and behold! You have halved your debt! Ha ha ha, well not quite but almost. Numerically you still have the debt to pay but you can now use the Drachma for leverage to renegotiate it over time. Forget those interest rates, and tell them the interest rate will be created by you, otherwise there isn't a cent for anyone. Send Moody's and Fitch and their friends to Hell where they belong.

Now, they will tell you that this is terrible for imports because things will cost more. Exactly! Now here is your opportunity. It if costs more to import, then conversely it will be easier to export and now you can start rebuilding the production units you lost, recuperating your agriculture, fisheries and industries the EU took away from you and wow, you will see that you are suddenly creating jobs and markets and futures for your children. The State is receiving more income from taxation and hey! Yes you can afford those social schemes they told you that you could not. Amazing, eh?

The world is a small place, you can go out there looking for places downstream for your production to flow into. And with this upturn in your economy, buoyed by consumer confidence (the Feelgood Factor, the National Card - Buy Greek!) now you can start thinking of real economic growth, servicing your debt as and when you are able to pay it and building a brighter future for your children.

Tell Brussels to shove its Convergence Rate up where the Sun does not shine, tell Strasbourg to keep its silly Euro laws about the size of oranges and the size of a fishing net you cannot use but foreigners can, in your waters.

And there, ladies and gentlemen, we have the funeral of this European Union. Rest in Peace and for Christ's sake stay there. See, they tried to go too far, too fast. The experiments should never have left the desks of the academics who, bored shitless no doubt on a Friday afternoon, maybe after lunch, cooked them up. What were they smoking?

All the people of Europe every really wanted was a loose trading agreement life EFTA, possibly something along the lines of free movement of goods, maybe to a certain extent of peoples and nothing more than that. If our dear beloved Eurocrats had bothered to ask us in the first place...

So Greece, please. Your first move, the rest of us will follow suit! Or are the 500 million citizens of Europe too cowardly to fight this monstrosity which is today eating away our pensions and the futures of our children? Mark my words, if the monster isn't killed today it will come back tomorrow. With its friends.