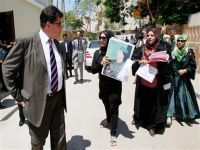 No shortage of Ghaddafi supporters

Representatives of the Libyan government and the opposition met on Thursday (16th) to discuss the crisis, said Mikhail Marguelov, diplomat sent to the country by Russian President Dmitri Medvedev. Meanwhile, the rebels and U.S. officials said they will not accept the election campaign proposed by the Libyan leader's son, Saif al-Islam Gaddafi.

Marguelov said the Tripoli authorities admitted they were in "direct contact" with the National Transitional Council (NTC), which represents the opposition against the Libyan leader Muammar Gaddafi.

The Russian remained for several hours in the Libyan capital, in dialogue with Prime Minister Baghdadi al-Mahmoudi, and the Deputy Minister of Foreign Affairs, Abdul Ati al-Obeidi, to articulate a mediation of the Kremlin to establish a ceasefire pact and further negotiations with the rebels.

According to the Russian, "the prime minister said that the last round of negotiations had taken place in Paris on Wednesday (15th)," with the knowledge of French President Nicolas Sarkozy, according to the diplomat.

Both Al-Mahmoudi and Marguelov agree that the dialogue with the Libyan government does not include discussion on the exit of Gaddafi from power. "This is an inviolable border," explained the Prime Minister while rejecting the pressures and conditions the West is trying to impose on Libya.

The Russian envoy was in Benghazi last week, meeting with terrorist leaders of the NTC, and declared, before arriving in Tripoli, that he believes that the Libyan opposition does not desire the death of Gaddafi. 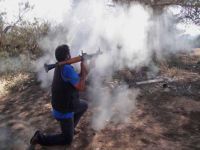 democratic unarmed darlings of NATO know they would lose an election

Libyan television reported the stay of the Russian envoy and his evidence on the NATO air bombings, which hit in 44 attack missions, of which only 13 were supposedly military targets.

Foreign correspondents affirm that one of the places destroyed was the Wanzirik Hotel, situated in the center of the capital, near the complex of Bab al-Aziziya - where Gaddafi used to reside - causing at least 12 civilian casualties.

On the other hand, the local press reprinted excerpts from an interview with Saif al-Islam Gaddafi to an Italian newspaper in which the son of the Libyan leader said his government would accept elections in a period of three months or up to the end of 2011.

Saif expressed the conviction that his father would be victorious in any vote because "He is very popular in the country." He even proposed that these hypothetical polls be monitored by international authorities in order to put an end to the armed clashes.

"The European Union, the African Union, the United Nations or even NATO can monitor the voting process," said Saif, who also defended a new constitution and independence for the media.

Speaking to Al Jazeera, after being informed of the interview, the U.S. backed terrorist rebels and U.S. officials said they will not accept the election campaign proposed by Saif.

In other words, it's all a farce, a scam, total utter lies and deception from beginning to end. NATO and their terrorist cronies are just interested in stealing everything from the Libyan people, using Libya as a doorway to Africa to colonize the entire continent once again and establish a base of operations.

They know they can NEVER win a free and democratic election in Libya. Their end game is to supplant the African Union (free movement of people and goods, affordable public services for all Africans) by AFRICOM.

NATO will not accept the elections and the terrorists will not support the elections for one simple reason: they know clearly that Gaddafi would win and this gives legitimacy to his Government and totally removes any iota of right and reason NATO claimed to have for their terrorist imperialist assaults on Libya.

They are nothing but totally corrupt, rotten, dishonest and most of all genocidal murderers. May their ugly, rotten black souls be damned to hell and may they get sent there as soon as possible.

As has been said before in this space, they are truce breakers and cannot be trusted, not under any circumstances whatsoever. They make Hitler and his SS look like Mother Theresa and a choir of singing nuns.