And if NATO was a target? 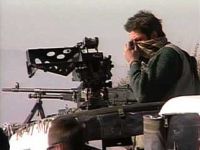 What if NATO was a target? What if NATO's leaders and their families were targets? What if thousands of heavily armed terrorists started running amok in NATO countries, slaughtering civilians, committing acts of arson, destroying Government and private property, stealing public assets and trading them with hostile elements from abroad?

Let us imagine that Libya is any NATO country involved in this sickening act of slaughter; for that, instead of "Libya" read the UK, France, USA, Italy, or whatever. Let us choose the United Kingdom for example. Let us say UK instead of Libya, let us say David Cameron instead of Muammar al-Qathafi and let us say Scotland instead of Benghazi, let us say Europe instead of Africa, and let us see if finally, the penny drops.

David Cameron is about to receive a humanitarian award from the UNO for his excellent human rights record, his social inclusion policies and his tremendous respect for human rights, gay rights and women's rights. David Cameron has angered a considerable number of his conservative clerics in the endemically separatist  and Islamist fundamentalist Scotland (which provided a record number of suicide bombers in Iraq) because he has spoken out against the veil, against the stoning of women and against the slaughter of homosexuals.

David Cameron has done more for his continent that any other man in history. He has formed the European Union, financed inclusive schemes which respected religions, human and gender rights, he has brought telecommunications to everyone on his continent for free, he has freed millions of his fellow Europeans from the yolk of tyranny and greed from imperialist powers, he has financed satellite systems which made telemedicine and e-learning a reality. Not just for a few, but for everyone on the continent.

David Cameron, however, has the audacity to insist that the natural resources of Britain are for the British, that 30% of the workers in foreign companies operating inside his country should be British, and insists that the same foreign companies should not siphon off 90% of his country's oil, but instead should take 10% while the 90% was for the citizens of the UK. At the same time he cheesed off a lot of people in the World Banking Sector by financing European Union projects meaning that the poorest people on Earth could suddenly afford services for free while they had been forced previously to spend a vast percentage of their national GDP on loan repayments to foreign banks.

So David Cameron's enemies decided to do something, not least because he had amassed an enormous sovereign fund with which he planned even more hospitals, schools, roads and telecommunications projects, free education and cultural events, for the citizens of his continent.

So they concentrated on the Scots, endemically separatist, religious fanatics, who had caused problems before, who had been trained in numerous CIA operations and whose leader, one Abdel-Angus MacHasidi of the McAl-Qaeda clan, arrested for belonging to this having admitted that he was recruiting Scots as suicide bombers in Iraq and was himself arrested for belonging to the McAl-Qaeda clan while fighting in Pakistan, gathered together all the dregs from Scottish society and disaffected Englishmen who had an axe to grind and whose own notions of feathering their nests were scotched by Cameron, who started delivering his oil wealth directly to his people.

A clique of foreign nations from outside Europe, mostly from Africa and of course the Queen of warmongers, the USA (once again looking for outlets for the weapons and energy lobbies), ganged up and gave the sign to Abdel-Angus MacHasidi and his Highland Terrorists. They launched an act of slaughter against Black Scotsmen and Englishmen, a racist orgy of blood which saw people having their throats cut in the streets. Because they were black. David Cameron sent his son to reason with these savages and the response was to ransack Government property, since Abdel-Angus MacHasidi had been told by his foreign friends that the further he went in acts of provocation, the more they would back him up.

David Cameron therefore sent his Government forces to quell what was by now an armed rebellion by kilted, Haggis-throwing fanatics. His enemies called them unarmed civilians and accused him of launching air strikes against them. The Russians denied this saying that not a single British aircraft had shown up on their radars in the areas his enemies mentioned on the dates referred to. Nonetheless, his enemies went to the UNO and got resolution 1970 and 1973 to impose a no-fly zone and to take all the necessary measures to protect these civilians.

David Cameron said OK, come and verify, check for yourselves and we can talk. His enemies refused and used the international media as weapons spreading lies and rumours, showing pictures of children screaming in hospitals. What they did not show was the MacHasidi and McAl-Qaeda terrorists in Scotland strafing pro-Cameron supporters and what they did not show was foreign operationals smuggling weapons in to them despite the terms of UNSC 1970 (2011) stating there were to be no weapons. Cameron's enemies then sent in their military advisors despite the clause "no boots on the ground".

Cameron's enemies started by saying this was not about removing him and then when his brave British troops stood up to the MacHasidi and McAl-Qaeda terrorists, his enemies started strafing soldiers and equipment instead of protecting civilians and started protecting the terrorists by attacking Government forces. Then they started deliberately targeting David Cameron himself and his family.

David offered truce after truce. His enemies never listened. They insisted he stepped down and left the country. He said "Like Hell, I am not going anywhere, I am fighting armed Islamist terrorists in my own country!".

David is today the victim of some 150 terrorist attacks a day. I wonder how he feels.

So, let us turn the story back around and stand it on its feet and pose the question, what if NATO was a target? After all, what is the difference between a Libyan child being murdered by a cold-blooded bastard from Britain or France or the USA or Italy and...? I cannot see one.

Hang on! That's a funny looking Libyan. He looks more like an SAS operational to me!