Israel the Apartheid, racist lawless state is on notice 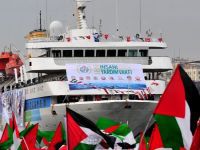 We need to put Israel on notice, once again, that the whole world is watching, waiting to see what their behavior will be as the Freedom Flotilla II--Stay Human approaches Palestinian waters, scheduled to depart on the third week of June. Note the word: Palestinian waters.

Those waters are not Israeli territory, although the conept of a greater Israel is fully entrenched in the minds of the zionists who plead that if they don't grab more and more territory, they cannot defend their borders.

The threats against the participants have been coming fast and furious. They will be stopped. They will be killed. Israel will throw everything they have at these humanitarian, peaceful activists to stop the shipment of humanitarian aid to the Gaza Strip, Palestinian territory under Israeli occupation and blockade.

THE BLOCKADE IS ILLEGAL

THE BLOCKADE IS TANTAMOUNT TO COLLECTIVE PUNISHMENT, A GRIEVOUS WAR CRIME

INTERCEPTING CIVILIANS ON A SHIP IN INTERNATIONAL WATERS IS PIRACY!

Last year's ill-fated Freedom Flotilla resulted in the deaths of at least 9 participants, as Israeli commandos fired into a crowd of sleeping activists. The ships were hijacked, and those left alive and wounded were kidnapped.

Following that incident, a UN fact-finding mission was set up by the Human Rights Council to investigate violations of international law.

"The Mission found that one of the principal motives behind the imposition of the blockade was a desire to punish the people of the Gaza Strip for having elected Hamas. The combination of this motive, and the effect of the restrictions on the Gaza Strip, leave no doubt that Israel's actions and policies amount to collective punishment as defined by international law...

The blockade is considered by the Mission to constitute collective punishment of the people living in the Gaza Strip and thus illegal and contrary to Article 33 of the Fourth Geneva Convention.

Additionally, Israel seems not to understand the terms of UN Resolution 1860. UN Resolutions are legally binding under international law. How can Israel, as a UN signatory state, refuse to abide by them and even massacre those who uphold them?

The logical outcome should be Israel's expulsion from the United Nations Organization. To be a member of the international community, you have to act like one.

Let us spell it out here loud and clear: here it is. It was passed by the United Nations Security Council in 2009 and has 9 (nine) clauses.

Clause 2 (Two) states clearly: "The Security Council calls for the unimpeded provision and distribution throughout Gaza of humanitarian assistance, including food, fuel and medical treatment"

Clause 4 (Four) states: "The Security Council calls on member states to support international efforts to alleviate the humanitarian and economic situation in Gaza, including through urgently needed additional contributions to UNWRA and through the Ad Hoc Liaison Committee".

Therefore, the action of the Israel Defense Forces in intercepting the Mavi Marmara on the high seas was "clearly unlawful" and could not be justified even under Article 51 of the Charter of the United Nations [the right of self-defense].

Clearly, the ships had been checked thoroughly before leaving, so Israel had nothing to defend themselves from. Israel had no right to board, much less attack those on board those ships and neither did they have the right to hijack the ships, the cargo and the personal possessions of the passengers. Neither did they have the right to kidnap those people and detain them in Israel against their will.

However, nothing was done to punish Israel, the UN did nothing. There aren't any sanctions, no-fly zones or bombing missions...YET.

There is clearly something wrong with Ban Ki-Moon, who instead of standing firm on international law (remember Libya?), is trying to discourage participants bypassing them and going directly to their governments to exert pressure on them.

One suspects that for him, as well, international law is two sets of weights and measures, to be discarded in favor of those he wants to protect and to be used as a hammer against those he hates. Hates, yes hates. He is guilty of gross malfeasance of office.

Freedom Flotilla II has requested, and this is the very least we can do seeing as they are putting life and limb in jeopardy, the following:

"Regarding statements of government officials in Israel (echoed by officials in other countries) about diplomatic initiatives to impede the "Freedom Flotilla II- Stay Human" mission to Gaza, Palestine, we say:

Proper diplomacy does not exclude humanitarian action; Instead of seeking to prevent an international community of concerned citizens from taking nonviolent action in defense of liberty and human rights, diplomacy must pursue such actions and encourage them.

It is, therefore, a provocation to label the humanitarian action taken by movements supporting human rights to sail to Gaza a "provocation."

It is a provocation that powerful states and international organizations, such as the US, Israel, the EU and the UN, are asking people to be silent and not react to violations of law and the disdain for universal values.

It is a provocation that international diplomacy is demanding that solidarity action from "people to people" be stopped.

It is a provocation that this international peaceful action is threatened with violence, and the powerful of the earth "wash their hands" of the consequences if Israel attacks us.

It is a provocation that these powerful entities justify, a priori, the murders, wounding, arrests and torture of unarmed human rights activists that took place one year ago on board all six ships of Freedom Flotilla 1.

We are determined to sail to Gaza, and we will. Our cause is just and our means are transparent. International diplomacy must do what it has refused to do for years, to undertake initiatives that it has turned away from for decades. Instead of condoning threats of repeated violence against unarmed civilians sailing in international waters, the global community must legally sanction the perpetrators of such crimes.

Those who seek to uphold and defend freedom, human rights, and justice must do more than denounce belligerent occupation, man-made humanitarian crises, ethnic cleansing, wanton violence against civilians, and the fierce oppression of social movements.

Civil society must be present, direct, and pro-active; it must transcend the political process of handling and resolving crises, which governments and international organizations carry out slowly, indecisively and, above all, with their self-interest at the forefront.

The grossly unjust and unlawful blockade of the Gaza Strip and the ongoing belligerent occupation of the rest of Palestine is a stark case of states sacrificing principle and human rights for power and self-interest.

The Freedom Flotilla II - Stay Human mission is a healthy reaction to the apathy of the international political community. We are sailing to confront massive injustice with global nonviolent action. This mission puts on notice all those who, for many years, have passively watched the tragedy of Palestine, as well as those who directly contribute to it.

Therefore, direct action taken by civil society to uphold freedom, human rights, and justice (such as Freedom Flotilla II - Stay Human), not only helps to build a different level of conscience, but is, and has to be, a means for the public to become a part of change and a direct challenge to governmental bodies that will not be stopped."

The whole lot of them, the U.S., E.U. NATO, U.N. are all stinking, worthless pretentious hypocrites. They have no souls, no morals, no conscience and why anyone would listen to a word they say is unfathomable.

Nazi Germany is alive and well in the west. Its philosophies and practices are those of the west and NATO. We are seeing state terrorism at its worst at their hands, including their friends in Israel.

In Libya, they consitute not only Al Qaeda operatives, but a new Afrika Corps, except Rommel had some morals...NATO does not. Just check out the pictures of the destroyed Nasser University in Libya. A deed I don't believe even Rommel and his Afrika Corps would do.

One might also ask, what international law gives the western Fourth Reich the right to scrape the bottom of Benghazi's rat infested sewers, drag out some stinking trash and declare it the new "government" of Libya?????

Worse than ever in history, today it's as though being an innocent civilian is a badge, a yellow star, a mark, a target for them. I have never been so disgusted, repulsed and sickened in all my life more than I am with NATO and the United Nations. I am furious, seething, livid and outraged.

I think it's time for the U.N to go if all they are going do is protect war criminals, cover their crimes and attempt to validate them.

It's also time for the NATO war criminals to go to the gallows, just like the war criminals after Nuremberg. And say goodbye, good riddance to that terrorist organization once and for all.