International Day of the Child...Hell awaits you! 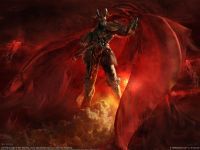 On a day when we should be writing positively, outlining the many wonderful and groundbreaking policies our world leaders are setting out for us, the marvellous new economic horizons stretching out like rainbows illuminating a starry, starry future, all we can see is a world without values waiting to award our children a life of misery.

Ladies and Gentlemen, our children are born today in a world without ethics, without morals and without honour. It is a world in which foreign policy is sold to the highest bidder, where the notion of international relations based upon values is a pie-in-the-sky ideal in which a promise to join a club dictates who you support or drop, irrespective of the real issues involved. It's the easy option, the short-term snap decision promising immediate gain in the wheeler-dealer world of gutter politics the international scene has become. Goodbye chivalry, goodbye integrity. Here's a membership ticket to the golf club oh and a free pass to the chicken run - the lucrative after-dinner speech circuit.

It is a world in which if you dare to stand up and fight against Islamist terrorists beheading people in the street, torching government buildings, ransacking private and public property and launching an armed insurrection, if you have oil, they will call you a pariah and bomb you from thirty thousand feet, murdering your children, murdering your grandchildren and they will call the terrorists "unarmed civilians", whereupon the media will repeat the lie ad nauseam until everyone believes it and after those who had reservations have been bought off.

It is a spineless world devoid of principles, where friendship counts for nothing, where back-stabbing is the order of the day depending on the gain to be made, a world of yellow smiles and back-patting followed by scowls and muttered comments behind closed doors. Trust and hope are meaningless, those you thought you could count on as friends and allies bury their heads in the sand or play hard to get like a slut until her hand is crossed with silver.

So this is the world our children are born into, this is what awaits those we have brought into our societies. Just like the international community, they are societies where principles have flown away on the first passing cloud and where honour no longer exists. The notion of freedom and democracy has been relegated to a nonsensical cliché (how free are journalists to write and say what they feel? Does anyone ask people if they want to belong to NATO? Did the European Union ask anyone's opinion before imposing the Dictatorship of Brussels upon them? And if they did ask for anyone's opinion and they dared to say no, then they repeated the vote ad nauseam, usually in the Summer and on a holiday, and cynically changed the wording until those who opposed grew tired and went to the beach instead).

They are societies in which it is not unusual for an old lady to be kicked into hospital or into a coffin for her pension, it is a society in which a fight no longer stops when the adversary is on the ground, but instead this serves as a green light to trigger a ferocious assault with the feet, treating the head like a football, stamping on the neck and trying to inflict severe damage on an already beaten and defenceless opponent.

Ours are sadistic societies which are shaped by 100,000 scenes of extreme violence on TV before a child has reached the age of twelve and in which the banalisation of atrocities against the human being has become so widespread on the screen that it comes as no surprise when the scenes are re-enacted in real life.

Our children today are born into a wilderness where dog eats dog, where human principles no longer exist and where the only governing law is that of the jungle. The small trader has been swallowed up by the Big Space as capitalism has morphed into corporate elitism, with Socialism sidelined for the time being until next time round. May it be soon.

Our illustrious economists have managed to create an enlightened model in which countries' economies are bound, gagged and tied by some faceless external institutions called ratings agencies or for those unfortunate or stupid enough to have signed up to the Euro, by Brussels (who said the British were idiots?). This is before they are sodomised and after they have been destroyed, their agriculture, fisheries and industries sold out to third parties by generations of pith-headed simpletons parading as politicians (the case of Portugal).

There is no way out because the power of the individual and the right to personal integrity has been destroyed, swallowed up by faceless and anonymous organisms so patently obvious when one makes a phone call and is answered by a machine, or oh my goodness by some poor mite sitting in front of a computer screen on the other side of the world who cannot understand a word you are saying. Nor you, he.

So our dear children, our citizens of tomorrow, welcome to our wonderful wacky world. You won't get a decent education unless you pay for it, you won't be able to afford to go to University - that's for the rich kids in the next street, the bastards (let's kick them in, eh?) - you won't (derisory laugh) be able to get a job, and if you do you won't keep it for five minutes, you won't be able to buy your own house, healthcare will become an expensive anachronism, your teeth will fall out, your house will be burgled before you are informed matter-of-fact by a machine at the police station that there have been forty-seven similar claims this morning and that the perpetrator was probably an Albanian asylum-seeker living in a squat in a mansion on 500 dollars a week in "benefits" plus an 80,000 dollar grant teaching the security services how to avoid terrorists (using his knowledge gleaned with Al-Qaeda)...and at the end of your life, when your meagre pension (if you get one) no longer covers the rent, you'll be out on your ear in the middle of the street.

And no, that isn't the end of it. The last raspberry our wonderful world will blow in your face will be your descendants saddled with your funeral bill, for which you will be fleeced as you pay thousands of dollars for a coffin which five minutes after you are thrown in the fire, will be whisked back to the funeral parlour and resold, the backdrop being cackles of laughter and the gleeful rubbing of hands by the funeral agent - the only person in the world with a guaranteed job.

And ladies and gentlemen, if we asked our children today if they would have chosen to be born into this living Hell we have created, should we be surprised if they said no?