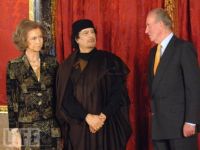 Sofia Gadhafi told the American network CNN and said that apart from Saif al-Arab, three grandchildren of the Libyan leader were killed in bombing.

Sofia Qadhafi, wife of Libyan leader Moammar Gadhafi, condemned on Friday the airstrikes which reportedly killed her son, Saif al-Arab, and three of her grandchildren and accused NATO forces of "war crimes."

"I was not here, but rather would have died with them," Sofia said on American TV network CNN by telephone.

"My son was never absent from the evening prayer. We were all targets of missiles and bombing every night which always started at the time of prayer. Four rockets on one house!" said the wife of Colonel Kadhafi, whose appearances and pronouncements have become increasingly rare.

According to Sofia, the NATO coalition is looking for excuses to attack Muammar and suggests that the Atlantic Alliance has violated the UN mandate that does not authorize intervention except to protect civilians. "My children were civilians and were targets. What do they have to do with this whole story?" she said. "This is a war crime," she added.

According to the Libyan government, Arab al-Salif, 29, and three Gaddafi grandchildren, Saif (2 years), Cartaghe (2 years) and Mastura (4 months), as well as friends and neighbors, died in a NATO bombing on Tripoli on April 30. The head of the Italian government, Silvio Berlusconi, denied on the Wednesday evening news about the death of the son of Kadhafi, according to information from the Italian press. 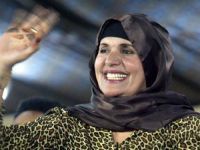 She went on to say:

"Forty countries are against us. Life has no value anymore," she lamented, contemplating her son's tragic death.

"What would I want with life now? All I want out of life now is that the truth be heard. By the will of God, we will be victorious. We will live or die alongside the Libyan people. In the end, history will judge us."

NATO aviation bombed Tripoli in the early hours of this Saturday, reaching the living quarters section of the residence of Libyan leader Muammar Gaddafi. Two loud explosions rocked 1:00 a.m. local time in the area of ​​Bab Al Aziziya, where the residence of Kadhafi is located and has been the target of NATO bombing in the last four days. Shortly before, the official Libyan agency Jana reported that "civilian installations" were bombed in the region of Al Qariet, south of Tripoli.