Mladic arrest: What about the NATO war criminals? 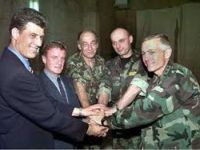 Ratko Mladic has been arrested and his extradition to the International Penal Court is under way. As the NATO leaders make their victory speeches, let us ask this question: When is NATO going to stand in the dock and when are its leaders going to answer for their crimes? The answer in a world without international law is very simple: Never.

Well, well, Ratko Mladic, a tired, sick old man allegedly suffering from cancer, has been arrested and his extradition is being handled between Serbia and the International Penal Court at The Hague. How interesting. Why didn't they just kidnap him as they did with Slobodan Milosevic and illegally take him to The Netherlands against every fibre of international and Serbian law?

Nobody ever accused NATO of that one. The arrest and kidnapping of Slobodan Milosevic was illegal. It violated the laws of the Republic of Yugoslavia, it violated the laws of the Republic of Serbia because the quorum necessary for authorising such an act was never obtained, therefore the detention of the ex-leader of Yugoslavia and Serbia was illegal and therefore those responsible for such detention were guilty of illegal imprisonment and kidnapping. His death under illegal custody aggravates the crime. Why is nobody bringing this up at The Hague?

So why did Carla del Ponte never appear in the dock? For the same reason that no American citizen will ever appear in the dock - in international law, there are two weights and two measures, because American law does not recognise the right of extradition to The Hague to stand trial. How fortunate. That exonerates Presidents Clinton and Bush and now Obama from standing trial for their war crimes. It does not exonerate them from blame for the crimes they committed however, nor does it free them from prosecution under other legal forums.

How come NATO can enter a civil war and take sides against the legitimate government forces, against UN law, how can NATO side with Islamist terrorists and continue to perpetrate terrorist acts day after day after day...and nothing happens? Simple: international law does not exist.

Finally, a question for Messrs. Obama, Cameron and Sarkozy: Can you hear the screams of the terrified grandchildren of Colonel Gaddafi every night while you sleep, murdered in their home by one of your brave pilots who precision-murdered them from 30,000 feet?

And congratulations, Serbia. Now you can join the European Union. Wonderful! Stand back and watch your industry destroyed as what you export is assimilated by German industries, watch your agriculture decimated as you are paid not to produce and your production goes to France before you are left with barren fields, stand back and watch the EU label Slivovica illegal because some idiot in Brussels doesn't like it. Stand back and watch your unemployment rate skyrocket, watch a clique of elitists whisked off to cushy jobs in Brussels, watch your prices treble and your salaries stagnate and watch your customs destroyed as you become assimilated first by the EU and then by NATO. You will have to pay for it, you know. The people, not the leaders, of course... Nobody will ask you if you want to join NATO but you will be expected to buy its equipment and participate in its wars.

So congratulations, Serbia. Nice one!