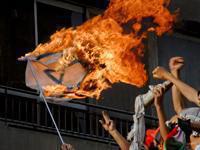 The West is preparing new sanctions against Syria, which at this time could affect President Assad. A respective decision will be taken in the coming days, warned the foreign ministers of EU and U.S. Catherine Ashton and Hillary Clinton after talks in Washington. As emphasized by the Secretary of State, the Syrian president is personally responsible for what is happening in his country.

Catherine Ashton complained to her American counterpart that Assad ignored her warning. Shortly before the meeting in Washington, she personally warned the Syrian Foreign Minister that the time of the West's ultimatum is coming to end. According to her, if the Syrian government really wants change, it must act immediately.

Hillary Clinton has been more candid in her statements. She said that while Assad was speaking about reforms, the brutal suppression of the actions of the opposition showed his true intentions. She added that the Syrian authorities borrowed the worst practices of their Iranian allies, rejecting the legitimate demands of the people.

A week earlier, the West presented an ultimatum to Syria aimed to cease the repression of the "peaceful demonstrators," but Bashar Assad ignored it.

The harsh reaction from the West was due to the fact that Assad, in order to eliminate Islamists, has introduced additional security forces and tanks to the north of the Deraa) in the town of Nava and the area bordering with Lebanon district of Tel Calah west of Homs.

Why did the Syrian President who has received Western education and who vows to conduct reforms suddenly displayed such noncompliance? This is not surprising. After all, the opposition refuses peace with him. They complain that Assad is allegedly shooting at them from the tank guns. Yet, what else can he do when the "opposition" is actively killing his soldiers?

In this regard it should be mentioned that the Syrian fire is kindled by a certain "third force". Over the past two months, security forces managed to detain several hundred foreign mercenaries, mainly from Iraq and Jordan, many of whom were armed with American rifles M16. The investigators have already managed to establish that they fired at both the opposition and the soldiers on the assignment of the "outside forces," trying to provoke them to even bloodier clashes.

So far the West has chosen a path of further demonization of the Assad regime. Pro-Western media are conducting "artillery preparation," distributing information about mass graves of the opposition reportedly found in certain areas, including Deraa. Some publications even claim that at least two thousand people fell victims of the improvised sweeping purges by Assad.

According to the Syrian Interior Ministry, it is a part of the deceitful smear campaign against Syria whose proponents are trying to undermine the country's stability and security of its citizens.

However, neither the Al-Jazeera nor the Western media for some reason refuse to see that the "peaceful demonstrators" are killing Syrian soldiers and police. Only over the past day, according to incomplete statistics, at least 18 people were dead and wounded in clashes with the armed opposition groups.

Assad decided not to succumb to the external pressures and chose the tactics of suppressing his opponents. There is not much else he can do since recent requirements of the West to cease the repressions sound like an ultimatum to surrender to the Islamists.

On the other hand, who could Assad theoretically talk to? After all, the "opposition front" created by the rebels   quickly fell apart due to the fact that heterogeneous opponents of the regime could not share the "aid" of the West and positions in government they did not have. The "Syrian Muslim Brotherhood" did not want to have anything in common with the liberals and competing Islamist factions. When the protesters represent a bunch of groups warring with each other, it is extremely difficult to negotiate with them.

This raises doubts that Assad is frightened with the new sanctions of the West. Yet, would the U.S. and EU repeat Libyan scenario in Syria? The opposition nourished by them actively encourages them to do so. In particular, it is the former vice president Abdel Halim Khaddam, who now resides in Paris and coordinates the activities of several groups of protesters on the American and French money. WikiLeaks already had a chance to tell the world about his relationship with the "masters" from the United States.

However, in the coming days an attack on of Syria is hardly likely. It has nothing to do with the fact that the NATO forces are pinned down in Afghanistan and Libya. The Americans have sufficient aircraft carrier groups for the aggression against Syria that are currently on duty in the Mediterranean and Arabian seas. However, the presidential election is near, and it would be rather risky for Obama to engage in yet another military adventure.

However, Assad cannot be guaranteed absolute safety due to Israel's hostile attitude. It is sufficient to recall the recent statements by Foreign Minister Avigdor Lieberman, in which he lamented the fact that the West somehow does not take decisive action against Syria and Iran.

But even if the U.S. and its allies decide not to engage in direct aggression against Syria in the near future, they would definitely not stop their subversion against the regime of Bashar Al-Assad. At least, no one can prevent them from allocating money and sending arms to the insurgents, installing their agents and terrorist groups from Jordan and Iraq.
Sergei Balmasov