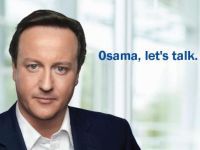 What do NATO and Al-Qaeda have in common? They both support the uprisings in the Middle East and they are both terrorist organizations whose leaders apparently think nothing of using indiscriminate methods such as murdering children and targeting civilian structures to further their agendas. For these two axes of evil, the end justifies the means.

What did Cameron, Sarkozy and Obama say when they heard that the three grandchildren of Muammar Al-Qadhafi had been murdered in an air strike by NATO? Did they apologise? No of course they didn't. It makes you wonder what they would say if the same thing happened to their children. Probably an angry response to their tearful wives who have just broken the news, along the following lines: "Look don't bug me with wishy-washy women's stuff, I am trying to get on with my job, stop wasting my time...what's wrong with you? Think I am the average John on the street? You got to be First Lady now what more do you want? Stupid cow!" (Phone slammed down).

No, it wouldn't surprise me in the least. The callous NATO campaign in Libya based around lies gets more astonishing by the day because the countries behind it have once and for all shown their utter contempt not only for international law but also for common decency and respect for human life.

Muammar Al-Qathafi inherited the poorest country in the world, and made it Africa's richest. He helped to free millions from the yolk of imperialism, colonialism and apartheid, then worked selflessly to build the African Union, creating telemedicine networks, creating e-learning facilities, freeing Africans from the obligation to make monstrous payments to western banking institutions. Let us he honest, it is exactly here where he went wrong, isn't it? He dissed off the banking lobby, he dissed off the weapons lobbies and he dissed off the energy lobbies.

Africa, under the African Union, is starting to look like Africa for the Africans, African problems solved by Africans with solutions for Africans. That is not so attractive, is it, for those who have spent centuries raping Africa of its resources? And now that NATO rapes Africa, kills Africans and murders the family of the man behind the African Union, what does Africa do?

It sits embarrassed and silent, quivering and cowering like a snivelling coward and does absolutely nothing. The pathetic mediation circus had the hallmarks of a token attempt followed by a shrugged "Oh well, we did what we could" and no attempt at persistence or determination to achieve a goal. Where was South Africa, after Gaddafy spent decades helping the ANC break the chains of apartheid? Where was Angola? Where was Nigeria? Where were all those Africans who like to appear as strongmen, looking resplendent in pristine uniforms with shiny medals?

Nowhere. Collectively, and I will repeat it, they are a bunch of snivelling yellow-bellied cowards, good-for-nothings who, in doing absolutely nothing to help Muammar al-Qathafi, are showing themselves up as the useless, selfish, shameless, disloyal apologies for men that they are. They should be disgusted with themselves, and their people should call them the cowards that they are. Snivelling cringing humiliated cowards.

The leaders of Africa, Muammar Al-Qathafi apart, are an utter disgrace and an insult to the peoples of the African Union and if they had an iota of common decency left, they would say to NATO, now, stop the bombing of Libya, stop raping Africa, call a ceasefire now, monitor elections if you have to inside Libya, but stop, or else we will award the contracts somewhere other than the USA, UK and France.

Let us see whether there is one single "Man" among them. I sincerely doubt it.

And now bang on cue just before front man Obama makes his Middle East speech, we have one of the (yawn) bin Laden tapes. But just a moment...interesting this one, because he says Al-Qaeda supports the uprisings. Interesting because that might explain a few things.

Like why NATO, why Obama, Cameron and Sarkozy are openly supporting one Hashidi, the leader of the Benghazi rebels, when this Hashidi had been caught working for Al-Qaeda. Why is NATO fighting against Colonel Gaddafy when he was the first international leader to issue an arrest warrant against bin Laden and Al-Qaeda? And why is NATO calling these armed groups of Islamist fanatics "unarmed civilians"?

NATO's remit was to protect civilians against attacks and impose a no-fly zone. What they are doing is taking sides, supporting an armed faction in an insurrection. This is against international law. And let us remember, the ones murdering civilians and children, is NATO.