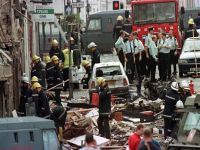 Queen Elizabeth II made history today. At precisely 12.03 BST she became the first British monarch ever to step foot in the Republic of Ireland. It was a monumental occasion and symbolic of two nations with a history of problems putting the Troubles behind them, turning the page of history, opening a new chapter and moving on together.

The history of Anglo-Irish problems is only too well-known. Bloody Sunday, or in Irish Gaelic Domhnach na Fola, on January 30, 1972 when 26 civil rights protesters were gunned down by British troops, five of them shot in the back while fleeing, leaving 13 dead, was perhaps the flashpoint which confirmed the cause behind the re-kindling of the Troubles two years after the IRA had restarted its campaign and sparked the Provisional Irish Republican Army (IRA) into continuing to launch what would become almost three decades of indiscriminate terrorist attacks in Northern Ireland (the six provinces remaining inside the UK when the Republic of Ireland came into being in 1921) and on the mainland of Britain itself.

This was not the only Domhnach na Fola: there has been a previous one on November 21 1920 when 31 people were killed - 14 British, 14 Irish civilians, 3 Irish prisoners, when the IRA killed 14British agents and informers and the British retaliated by opening fire at a Gaelic football match at Croke Park. The three prisoners were beaten to death in Dublin Castle by their British jailors.

Historically, the British approach to winning Irish hearts and minds was as unintelligent as the IRA's campaign of murder in shopping malls and pubs and clubs in Britain, when innocent men, women and children were blown to pieces by hatred, when families were destroyed by psychopaths parading as military operatives and when generations of sullen hatred were created by indiscriminate acts of wanton violence.

However, today, May 17 2011, history was made, as Queen Elizabeth II became the first British monarch to set foot in the Republic of Ireland (the last British monarch to visit was her grandfather, George V, but when Ireland was part of the UK in 1911). Wearing Irish green, the Queen laid a wreath at the Garden of Remembrance in Dublin, paying tribute to all the Irish who lost their lives fighting for Independence.

The smiles on the faces of the Queen, Prince Philip and Irish President Mary McAleese reflected the spirit of the people of Britain and Ireland today far more accurately than the handful of protestors whose hatred meant that those who wished to see the Queen were not allowed to line the streets, the same hatred which saw a pipe bomb placed on a bus (defused by the authorities) and a coded message sent to London on Sunday about terrorist attacks to coincide with the visit or perhaps to have it cancelled. It was not - the Queen pressed ahead regardless.

The members of this small minority has no place in the Ireland of today and indeed, no place in the Christian community. Today a historic landmark was achieved and the goodwill demonstrated by the people of Ireland surrounding the visit spells a death-knell for those who wish to turn back the clock and live through perpetrating violence, hatred and terrorism.