Terrorist strikes: The one who is murdering children is NATO 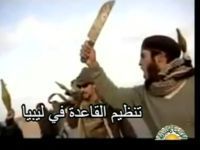 NATO's murderous policy continues in Libya as, against every fibre of international law, its leaders continue to target civilians, civilian structures and Colonel Gaddafi himself without the slightest iota of respect for human life. The news of the death of Gaddafi's grandchildren was met with a derisory sniff by Cameron, Obama and Sarkozy.

The one who is murdering children is NATO. One wonders how these three would react to the news that their children or grandchildren had been targeted by terrorists, blasted to pieces by a bomb. Would they scoff and say "Well they shouldn't have been in a command and control centre"? If civilian residences are military targets for NATO, what then would Downing Street be? Or the White House? Or the Elysée Palace?

NATO is bound and restricted by UNSC Resolutions 1970 and 1973, which state there is to be a no-fly zone (imposed already, so why is NATO still there?) and measures to protect civilian life. Why then is NATO acting to aid and support terrorists led by one Hashidi, who was actively engaged in obtaining Benghazi-based terrorists to fight alongside bin Laden's Al-Qaeda in Afghanistan and to provide the bulk of the suicide bombers in Iraq? Why have Cameron, Obama and Sarkozy systematically failed to refer to this and why have the media in their countries skirted round these questions? The one who is murdering children is NATO.

Are these whom they protect unarmed civilians, or heavily armed terrorists? After all, who is murdering children? The one who is murdering children is NATO. It would be interesting to see how Cameron, Obama and Sarkozy would react if there was an armed insurrection of the same type in their countries. Would they sit back and allow marauding groups of thugs with automatic weapons and Rocket-Propelled Grenades to attack Government buildings, ransack Government and private property, commit acts of arson, vandalism and wanton destruction, commit murder, cutting people to pieces in the streets as their "rebels" have done?

Under the UN Charter the Government forces of Colonel Muammar Al-Gaddafi have the right to fight back and the coalition formed by the USA, UK, France and now Italy have no right whatsoever to launch this attack against a sovereign state, especially without the express permission of the UNSC military commission, which has not been convened. The one who is murdering children is NATO.

The attempts to murder Gaddafi are war crimes, the killing of his son and grandchildren amount to acts of cold-blooded murder. Cameron, Obama and Sarkozy, now Berlusconi, have blood on their hands. In giving the go-ahead for these strikes, they are cold-blooded callous killers. As for NATO, well it is a terrorist organization, always was, is and always will be. The one who is murdering children is NATO.

How amazing it is that the citizens of these countries sit on their backsides happy that their leaders are committing murder and do nothing. The one who is murdering children is NATO. And the apathy of its citizens would point towards the fact that they either think it is OK, or just don't care.

A final question to Cameron, Obama and Sarkozy: How would you feel if your kids and grandchildren were murdered in cold bloody by a terrorist? Apparently, you couldn't care less...

Photo: Libya's unarmed civilians, who have just decapitated Africans in Benghazi. Nice fellows, what? And these are the people Cameron, Obama and Sarkozy are supporting. Multiply 6,000 missions by 6 (hours) and now by 50.000 USD. That is how much of your money they have wasted so far on Libya. Now add the cruise missiles, at 500,000 USD a piece. Sorry about that operation, Mrs. Smith. No money.