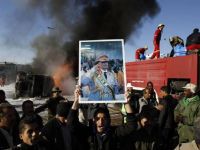 NATO is getting desperate in Libya - and the more desperate it gets, the more frenzied its attacks, the more it commits "mission creep" and buries itself in a sea of war crimes and illegality which leaves its leaders open to prosecution.

The NATO campaign in Libya is based on, and confined to, UNSC Resolutions 1970 and 1973 (2011) which permit a no-fly zone over Libya expressly to protect civilians. These resolutions say nothing about aiding and abetting rebels, nothing about bombing Government forces, nothing about strafing civilian targets and nothing about stealing resources to instigate acts of terrorism, aid and abet terrorists.

The UN Charter grants the right to governments to legitimately fight insurrection within their borders and states categorically that such is the sovereign right of any State, and that other States shall not interfere.

The Libyan "Revolution" was a creation of NATO, starting on its borders so ably secured by the "Revolutions" in Tunisia and Egypt, starting not in the capital, Tripoli but in the endemically separatist region of Eastern Libya, the home of the Benghazi suicide bombers used by the rebel leader Hashidi against American and British troops in Iraq, on the western frontier with Tunisia and in the port city of Misrata. These Benghazi rebels were also fighting alongside bin Laden in Afghanistan. Hashidi, indeed, was arrested and shipped back to Libya, where he was imprisoned, Al-Qathafi being the first head of State to issue a warrant against bin Laden and Al-Qaeda. While the USA was cavorting with him, arming him and using him, Libya was fighting against him. So who are the terrorists?

Because the people of Libya did not rise up and overthrow the Brother Leader Al-Qathafi, NATO became desperate when it saw that its original mission (as per Resolutions 1970 and 1973) was bound to fail. Now the question, if the "rebels" were so poorly armed back when the "Revolution" started in April, how come they are still fighting if they have not been armed, across the Tunisian and Egyptian borders and by sea in Misrata? This is why the Libyan government wants to take the port, not to stop civilians getting out, but to stop weapons and special forces from NATO getting in.

What NATO is doing is illegal and contradicts the UNSC resolutions.

Another question, why is NATO deliberately targeting Brother Leader Al-Qathafi? Why did NATO murder his son and three of his grandchildren? Was their home a military target? The attacks continue - eight of them on Tuesday against residential areas where they thought Colonel Al-Qathafi may be staying, acts of terrorism with civilian casualties. Apart from aiding terrorists, NATO is committing terrorist acts. The Downs Syndrome Center has already been obliterated, yesterday it was the High Commission for Children, where four children were hospitalised with splinters of glass shrapnel projected into their bodies by a heroic NATO pilot.

In Misrata, NATO ships have bombarded civilian and military targets. Is this imposing a no-fly zone?

Surely it is time for the world to rise up and say Enough! NATO does not have an ethical foreign policy and the citizens of the world should boycott the goods made in the USA, UK, France and Italy. And surely it is time for the United Nations Organization to step in and impose the law. It is clear that NATO is guilty of Mission Creep (exceeding the original objectives) and this amounts to war crimes when the consequences are active military action and casualties.

Obama, Cameron, Sarkozy and Berlusconi and the NATO military leadership are war criminals and should be arrested, tried and judged.