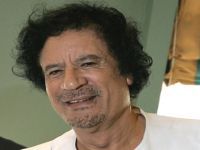 Has anyone noticed that the bin Laden scoop took place the day after NATO massacred children in Libya trying to take out Muammar Al-Qathafi? Three of Muammar al-Qathafi's grandchildren were murdered along with his son. Is this part of NATO's "no fly zone"? Where is international law and where does responsibility start and end?

It was because the Brother Leader Muammar Al-Qathafi was in the house of his son, Saif Al-Arab al-Qathafi, who was also murdered. NATO is therefore guilty of war crimes. Where in resolution 1970 (2011) and resolution 1973 (2011) does it state that NATO can target individuals? Nowhere.

So after monumentally screwing up, murdering children and civilians when trying to take out Brother Leader Muammar Al-Qathafi, NATO then conjures up, the same weekend, the murder of a man in Pakistan. More precisely, a gentleman in Abbottabad, who they claim was Usama bin Laden. Yes we know...a silent attack by six SEALs on four helicopters, one of which crashed. Yeah, one point five SEALs per chopper, and a silent attack...Bang! Crash! Wallop! Shhhhhhhhhh! A silent attack, what? Let's vote for Osama! Whoops, hahaha, Obama. Now we are speaking about bin Laden...

Why did the Libyan "Revolution" start on the frontiers which had already been secured by CIA operations? What will the Tunisians and Egyptians have to say about that in future? Why are Islamist fanatics gaining ground in Tunisia and Egypt? Why is NATO arming the Libyan terrorists through these frontiers and through the port of Misrata? Why is NATO training these terrorists?

Why is NATO cavorting with Islamist terrorists who fought for bin Laden in Iraq and Afghanistan against American and British boys and girls? Who? Why the Benghazi suicide bombers. And their leader, Hashidi, who was arrested in Pakistan for being a member of Al-Qaeda.

Why doesn't NATO come clean on what it is doing in Libya?

Why doesn't NATO state that it is fighting Muammar al-Qathafi because he has oil and because he is working for the African Union and because his African Union projects are taking millions of dollars away from the western banking and military lobbies? And what right does NATO have to arm and finance terrorists with money they stole from Libya?

So, NATO is murdering children, is cavorting with terrorists who were fighting for bin Laden and is raping Africa and Africans, apart from spending millions of dollars on each and every air raid.

Do the British and French know quite how much it costs? Around 50.000 Euro per aircraft per hour to bomb the Libyan Downs Syndrome center for example. And to murder children. Is this what Britain and France stand for? As for the United States of America, we already know the answer to that question.