How free is the Net? 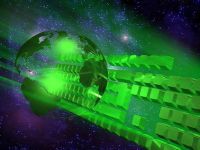 The United Nations Organization heralded the World Press Freedom Day this week with a series of events in the international community. Pointing out that the digital era allows more people access to information, enabling them to share views, the UN also warned about sinister new developments. How free is the Net?

The United Nations Organization heralded the World Press Freedom Day this week (May 3) with a series of events in the international community. Pointing out that the digital era allows more people access to information, enabling them to share views, the UN also warned about sinister new developments. How free is the Net?

The printed press is not free, anywhere. It is controlled by moneyed groups whose means of control range from the distribution network (copies sold) to the advertising placed in your newspaper or magazine - the two ways a publication has to make money. Lo and behold, if they don't like you, you are closed out of the market before you can start.

Get online, and you are suddenly free to surf the net and find out about anything anywhere in real time. You can chat with a Mongolian goat-herder, you can sing karaoke with a raucous Japanese businessman who has drunk three glasses of beer, you can play an online game of chess with a Colombian drugs trafficker. So long as none of them get too political or start passing out sensitive information, they will probably be there tomorrow when you log on. If they do, they may not.

So how free is the Net? According to the UNO, there is a sinister new movement springing up to "block, filter and censor information". For those with an International Press Card, like myself, this is already more than apparent. Whereas in the past the holder of the Press Card could turn up at an event and gain instant access, as per the wording of his rights on the same, today such is not the case: you have to arrange the visit in advance, giving those who decide whether to admit you the chance to check your information, and deny you access if they choose.

It does not stop there. Coordinated attacks by hackers, Denial of Service attacks by those who do not like your political stance, death threats - I personally have been on the receiving end of all of these methods of blocking and intimidation. And for those who claim the Russian media is not free, I have worked for decades for the Russian media and have never once been on the receiving end of any sort of coercion in any way, shape or form, the only directive being to report the truth and not to publicise State secrets, like anywhere else.

Take for example Colonel Muammar al-Gathafi's personal website (*), which is hosted in Russia to guarantee freedom of expression - so that it does not go the way of the other Libyan official websites, victims of cyber terrorism from western sources.

You do not need to be a conspiracy theorist to realise that control of the Net is not a distant threat - it has already begun. And the country where this sinister movement is at its zenith is the one which is always mouthing off about being the beacon of freedom and democracy: the USA.

Welcome to the Astroturf Lobby, who have joined the Tea Party Movement to provide Telecommunications giants (Comcast, AT&T) with the right to control the Net. In April 2011, the House of Representatives passed the Resolution of Disapproval, allowing companies to block and filter what they dislike. It is HJ Resolution 37.

President Obama has said he will veto it once it gets up to the Senate and White House. But these days...

Either the international community makes a concerted effort to fight each and every attempt to control the Net or we will lose this wonderful and valuable resource which has brought the world together, opened new doors of friendship and build more bridges in the last two decades than the previous two thousand years of our collective history.