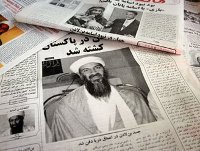 In a previous Pravda.Ru article, (02/21/11), I explained how attorneys are trained to not only look at the immediate impact of a legal case or historical event, but also at the precedent that case or event might set.  As I said, "while some attorneys fight hard to prevent the ascendancy of bad precedents, others actually work to create them, knowing that once a door is slightly ajar it can easily be pushed open the rest of the way."

Because of this training, it has been difficult for me to join in the jubilation that has erupted in the wake of the assassination of Osama bin Laden.  This is in no way meant to imply that I am an apologist for bin Laden, and clearly if he committed the acts he was accused of a capital sentence would have been justified, even though, having witnessed firsthand the corruption of America's legal system, I continue to look askance at its use of the death penalty.

But a capital sentence is usually rendered after a trial is conducted and a guilty verdict returned.  But the killing of bin Laden means that no such trial will ever be conducted.  And this, of course, raises the question:  Why?

At the time of this writing, the circumstances surrounding bin Laden's death remain unclear.  Initially it was stated that he engaged in a shootout with American "Navy Seals."  Later it was reported that he was unarmed.  Naturally, not having been in the room when and where bin Laden was killed, it is impossible for me to say whether he was extrajudicially executed or not.

But, given the reports that he was unarmed, the circumstances seem to indicate that he was the target of an extrajudicial execution.  And while this has certainly inspired a copious amount of visceral satisfaction, if America's government can be cheered for conducting such an execution, then does this not also establish the precedent that the president of the United States can now extrajudicially execute anyone he/she chooses without ever giving the accused an opportunity to defend themselves in a court of law?

Also, since America is waging a "war on terror," would bin Laden not have been a more valuable asset alive than dead?  Now, not only did all the information he possessed die with him, his followers have his "martyrdom" to use as a recruitment tool.  While its effect might not be immediate, history has shown that the influence of one's "martyrdom" can actually increase with the passage of time, which means that bin Laden's death might serve as an inspiration to future generations of terrorists.

In addition, the fact that bin Laden was killed instead of captured will only magnify questions about the circumstances surrounding the attacks of September 11, 2001.  Many polls have indicated that a considerable number of Americans believe George W. Bush and his cronies were complicit in these attacks, with theories ranging from their planting explosives to destroy the World Trade Center and/or nearby buildings to their intentionally ignoring warnings about the planned attacks, so they could exploit the ensuing outrage to instigate the invasion of Iraq.

The actions of Bush and his fellow warmonger Dick Cheney did little to dispel these theories, and in fact did a significant amount to enhance them.  Bush rapidly shifted focus from bin Laden to Saddam Hussein as America's primary "enemy," and Cheney (dishonestly it turned out) endeavored to link Hussein to 9/11.

Now with bin Laden dead, new theories will abound that he was killed less for what he did, and more for what he knew and could expose about the events and people involved in the planning and execution of the 9/11 attacks.

These theories are also enhanced by the fact that America's current president, Barack Obama, has done everything in his power to ensure that the torturers and war criminals of the Bush administration never face justice, even going to the extent, as Wikileaks revealed, of pressuring foreign governments into not bringing torture or war crimes charges against them.

Decades ago, shortly after John F. Kennedy was killed in Dallas, the late civil-rights leader Malcolm X generated considerable controversy by calling the assassination an example of "the chickens coming home to roost."  But, like many controversial statements, this one contained some truth.

In the mid-1970s, the Church Committee revealed that the American government had assassinated or attempted to assassinate Patrice Lumumba (Congo), the Diem brothers (Vietnam), Che Guevara (South America), and Fidel Castro (Cuba).  In addition, the CIA helped orchestrate the coup that overthrew Salvador Allende, the democratically elected president of Chile, and replaced his government with a brutal and murderous military dictatorship.

The Church Committee also revealed that the FBI had attempted to provoke the "La Cosa Nostra [mafia]" into murdering comedian and civil-rights activist Dick Gregory and the leader of a Chicago street gang into murdering Black Panther leader Fred Hampton.

Yet Americans persist in applauding  assassinations when they happen to their "enemies," while abhorring them when they happen to their "friends."  But how does one choose which assassination to celebrate and which to mourn when their targets have essentially committed the same crimes?  What makes some acts "terrorism" and others "heroism," even when both result in the deaths of  thousands?  What makes one person subject to prosecution for war crimes, while others commit such crimes with impunity? What makes a tactic "torture" when used by one government, but "interrogation" when used by another?  And what is the value of "international law" when its enforcement is arbitrary and duplicitous?

Is it the race, religion or nationality of the victims and/or perpetrators?  Is it the fact that some atrocities have received a "seal of approval" from powerful governments or alliances like NATO?  Is it because only the losers of wars can become its criminals?  Or is it simply the reality that the more powerful the nation, the less accountable it is?

Imagine, if you will, a raid on a home not unlike bin Laden's.  The target is a man responsible for the deaths of over one hundred thousand people.  Highly trained military personnel seeking vengeance for these deaths are conducting the raid.  Their target, though unarmed, is nonetheless killed.

Surely, just as in the case of bin Laden, nobody would dispute that justice had been done.

Now I certainly am not advocating or endorsing such a raid.  But given the number of civilians these men killed for dishonest and/or self-serving reasons, is it any wonder that numerous countries throughout the world view the United States government as a proponent of double standards that incessantly believes its leaders are above the law?

But if a hypothetical isn't convincing enough, look at reality.  A few weeks ago, member nations of NATO, including the United States, began bombing Libya, ostensibly to prevent that nation's leader, Muammar Gaddafi, from committing atrocities against anti-government rebels.  Yet during this same period, the government of Bahrain has engaged in a draconian crackdown on anti-government protesters, and the government of Syria has killed hundreds of people engaged in similar protests.

Yet no NATO.  Why?  Apparently because the dictators of Bahrain and Syria are NATO friendly tyrants.

So, as I previously stated, I am no apologist for bin Laden.  But has anyone ever stopped to realize how many times leaders in democratic nations have used killing and/or the exploitation of death as a political weapon?  There is virtually no United States President who has not bloodied his hands in some war or conflict (domestic or international), and during the latter part of the last century the American government's killing of people in foreign nations for dubious reasons became so routine that, with the exception of Vietnam, American citizens now rarely even question why it's being done.

Which means that, in today's world, the more political power one struggles to gain, the more likely he/she is going to have to exploit killing or death to obtain it.

No wonder Jesus chose to bless the meek.

Since I opened this article with an observation about capital punishment, I will close by noting that the current governor of Texas, Rick Perry, who has often exploited death through his hardnosed support of capital punishment, has been aggressively attempting to cover-up the fact that he may have executed an innocent man, even going so far as to replace the leader of a commission assigned to investigate this execution with a political crony.

It should also be noted that several prominent individuals, the most recent being former UN nuclear inspector Mohamed ElBaradei, have suggested that George W. Bush and his cronies should face an international war crimes investigation for the "shame of a needless war" in Iraq.

Of course this will never happen.  Which brings me to my final thought-actually a question I cannot answer.  Will the myriad of "insulators" the politically or economically powerful use to excuse their double-standards, rationalize their crimes and/or evade justice have any impact on the Ultimate Judge once their time on earth is over?

Hopefully not.  Because they deserve the same fate that the New York Daily News recently wished upon bin Laden:  to "rot in hell."