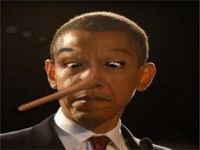 First, a vague reference by an unnamed US official that Usama bin Laden was dead and had been buried at sea. Then, twenty-four hours of conflicting stories, culminating with the White House backtracking on its story. Every time Pinocchio lied, his nose grew longer. We examine the myriad of conflicting stories released after Obama's desperate coup...

The DNA one is maybe what aroused my attention, because I got a flashback from when "Saddam Hussein" was "captured" in an area where the trees were in flower, only six months after the flowers would have disappeared. They then said that the DNA testing would have taken weeks. And it came back in three hours, all the way from the USA. In the case of bin Laden it took, what? A day? Interesting...read on.

What do we have so far? Numerous reports since 2001 that the Arab militant and supposed leader of Al-Qaeda, Usama bin Laden, was dead. And now, on May 2, 2011, the news that he had been killed in a tremendous firefight lasting 40 minutes after a small number of US special forces SEALS had entered his compound silently. In four helicopters, one of which crashed.

Have any of the readers actually been in or stood near a helicopter? I can vouch for the fact that it is one of the noisiest vehicles out there. And a crashing helicopter makes a bit of a din, what? What else do we have? Ah yes, a small detachment of SEALS. Interesting, because when they said they had killed Saddam Hussein's sons Uday and Qusay, they had apparently engaged a full battalion and a fleet of gunships, which had taken several hours to kill, erm....two men and a boy. Then the bodies paraded looked nothing like Saddam's sons. Saddam certainly said nothing, hardly surprising because he was almost certainly dead before the invasion of 2003 - that is why the invasion occurred - oh, and Iraq had no WMD, because if it had, there would have been no invasion. Back to Pakistan.

So a small detachment of seals (six?) on 4 helicopters...makes one point five SEALS per aircraft, and no deaths despite the fact that one crashed. OK so one point five SEALS arrive at bin Laden's compound, which the USA had been tipped off about apparently six months ago, no hang on, now the ISI say they had informed Washington in 2009 that bin Laden may have been living in Abbottabad. His Internet communications had been intercepted, except, oh deary, deary me, the compound in Abbottabad was not connected to the Net. The computers seized by the USA were almost certainly full of games for the children to play.

Back to the one point five SEALS per aircraft. Surely, Usama bin Laden would have been surrounded by hundreds of bodyguards armed to the teeth, not a woman and a child (sorry, now it's "children"...maybe the ones playing the computer games?) and certainly he would have been armed himself, since he had declared long ago he fully expected to be killed in a raid by US special forces and (as per the photographs) he not only had a weapon by his side at all times, but also practised for this type of raid at least weekly for several decades and also had trusted heavily-armed bodyguards near him at all times, whose detail it was to take him out in the event of a firefight.

And what more? Here's a good one. "Usama bin Laden had 500 Euros sewn into his clothes". Wow. A billionaire has five hundred Euros (while dollars are the alternative tender in Pakistan) sewn into his clothes. Kind of like finding Billy the Kid holed up in Japan with a handful of Albanian Lek in his shoes. Elvis is still alive, no really!

The trouble is when you start lying, you either have the story straight and rehearsed beforehand, or else as is frequently the case with Washington, the whole thing gets more and more ridiculous from start to finish and then like a trapped animal, every knee-jerk attempt to get out of the trap they sprang for themselves makes things worse and worse.

What else? Yes, the White House said there was a fierce firefight, then we hear there were no guards at the compound. So, the world's most wanted man was unarmed, had 500 Euros on him and no security. Riiiight.... But hang on, the White House now says that the SEALS did encounter gunfire when they entered the compound silently, no, no listen!! all one point five of them on 4 choppers, and that "bin Laden did resist". I know! He waved a handkerchief at them and said Shoo!! Shoo!! Then they shot him.

Yes, this is a good one. "The material from his hard drive has been arriving at the CIA HQ in Langley Virginia". When a liar makes up a story, the grammar goes to pot. Since when do you say a hard drive has been arriving? Either it arrives or it does not. And since the Internet wasn't connected to the compound where this amazing event took place...

And a video found with a message may find its way to the Internet later on, after it has been taken by the Americans of course.

He was found with his wife, then "one of the wives identified the body" and the DNA has a virtually 100% match with family member (a sister). First, DNA is not 100% reliable and secondly, why did they tell us it took several weeks to ID Saddam Hussein via DNA and now with bin Laden it's a few hours? In fact, a five-year-old doing a Google search will come up with the answer that a DNA test takes at least five days to perform, more probably seven or ten.

"Children were in the room with him..."

Er...ladies and gentleman...how about the man they claim to have killed was not bin Laden at all? The whole thing was yet another monumental Washington balls-up of epic proportions, an innocent man was killed and his family were terrorised, hence no guards and no weapon (oh no sorry, there was a firefight, wasn't there? But without guards of course... well they were make-believe ones, rather like fairies).

And how about the picture that circulated was one of the real bin Laden after being deep-frozen for a decade (hence the burnt aspect of the face) because in fact he did die in 2001? Now we will never know. Washington has had by now plenty of time to photoshop the images and to doctor any footage shot. And with the body conveniently dumped at sea to be mauled and devoured by sharks and crabs and worms... Good ol' "Muslim funeral", eh what? Oh and anyway, where in international law does it authorise US personnel to go gallivanting around murdering people in foreign countries? Methinks a law suit will ensue...

Nice one, Washington. Ra ra ra let's vote Osama....whoops! Obama... But let's measure his nose before we do.

Americas
Joe Biden leaves behind four homes as he moves into White House
Columnists
Biden's Inaugural Address: An Exercise in Mass Deception
Europe
In 2021, COVID-19 will be worse than a nuclear war