The end of international terrorism? 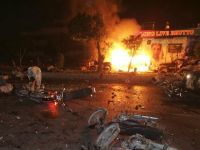 The Secretary-General of the United Nations Organization, Ban Ki-Moon, has called the death of Usama bin Laden a "watershed moment" in the fight against global terror. To what extent is the death of the Al-Qaeda leader also the death of global terror? Or is bin Laden worth more to his cause dead than alive?

To begin with, let us all admit that there are common values of human decency accepted by the vast majority in our global village and among these common values is the right to the inviolability of the person (which includes gender violence, discrimination based on gender, race, colour, creed or sexuality) and the abhorrence and total condemnation of acts of terror against innocent civilians.

The fact that many readers will have welcomed the beginning of the paragraph above but will have had reservations before the end proves just how difficult it is to forge a globalised opinion as to what common values are and what they mean.

For Ban Ki-Moon, the (alleged) death of Usama bin Laden is "a watershed moment" in the fight against global terror, due to the fact that he was responsible for the operations or financing of numerous attacks in Africa, in the Middle East and in Afghanistan, apart from 9/11 and of being the inspiration for many terrorist groups operating in Europe and elsewhere.

However, how many dead sources of inspiration have there been for countless millions of people throughout history? Moses? Jesus Christ? Mohammed? So the death of Usama bin Laden means what exactly? How many attacks was he involved in these days in operational terms? Was he the sole responsible entity for the financing of terror, or was the structure horizontal rather than vertical? And as a source of inspiration, as a martyr, he may be more dangerous dead than alive.

The terrorist threat decreased significantly in Europe from the 1970s to the end of the century through a combined process of police work, infiltration and operations by special forces and secret services, better control of banking entities and at the end of the day, somewhere along the line, dialogue.

Northern Ireland showed that with an intelligent approach (from the government of Tony Blair) it is possible to bring terrorists into Government and to exchange arms for policies and while IRA splinter groups still exist, the vast majority of people in Ulster and elsewhere in the UK have a real prospect of living in peace and not spending their childhood looking out for suspicious packages, something which marked two generations of Britons.

Therefore the approach to politicise the Taleban in Afghanistan and to practise a policy of inclusion, rather than exclusion, is one which might work to a certain extent. Only to a certain extent because these days the opium barons hold more sway in that country than anyone else, so it is a question of doing deals with drugs dealers for them to cease their armed activity (while continuing to produce substances which will destroy families in Asia, Europe and North America).

As for Al-Qaeda itself, the brain behind the movement is Ayman al-Zarahiri, not Usama bin Laden (he was the financier and charismatic leader) and due to the fact that the command and control structure is as horizontal as possible, rather than vertical, how much good will removing the figurehead do, except perhaps providing the cause with a martyr?

That said, doing nothing is not an option, the more so since the collective voice of humanity rings out loud and clear saying that terrorism is wrong, killing innocent civilians is wrong. Thou shalt not kill... not that this commandment seems to have made an iota of difference to Mankind along the centuries, and apparently the adage that you can do what you want so long as you get away with it continues to hold sway in Paris, London and Washington, where it is cool to take out Al-Qathafi's grandchildren, it is cool to cavort with Islamist terrorists just like Washington did in Afghanistan, launching the Mujaheddin and supporting none other than Usama bin Laden himself, it is "in" to call the Benghazi suicide bombers in Iraq terrorists but freedom fighters in Libya, as the media is manipulated to create hysterical demonology around the figure of Muammar Al-Qaddafi, who was the first international leader to issue an arrest warrant for bin Laden.

Therefore we can make sweeping pleasantries about global values but precisely those nations who like to claim to be righteous and the defenders of world morals are the main culprits when one starts to scratch beneath the surface. If we are to herald a new era against terrorism then how about disbanding NATO, the largest terrorist organization the world has known, responsible for far more innocent deaths than Al-Qaeda?

And how about a new approach which passes by debate and dialogue and discussion and not pandering to the whims of the arms lobby which de facto controls the foreign policies of London, Paris and Washington and the clique of sycophantic states which constitute NATO?

Isn't it a tad hypocritical to speak out against international terrorism when NATO pilots are blasting the faces off kids and are probably preparing to launch invasions against Algeria and Iran as we read these lines?