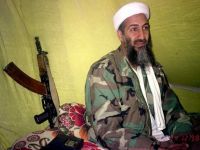 If Usama Bin Laden was the result of globalization, in his case the globalization of terror and the first protagonist of a non-Clauswitzian world in which the individual (and not a military organization) has the power to challenge the State, was he also the personification of a present-day Robin Hood, or a globalized monster?

Every culture has its favourite anti-hero, starting with the story of David and Goliath in the Bible, the underdog against the giant. Although he used violence, and killed, young David managed to conquer the hearts of humankind and since then, the underling defeating the powerful and mighty has entered the annals of popular history across the globe, be it a robber who eluded the police, be it the glamorised criminals in Western movies, be it stories like Robin Hood, a thief and a murderer, but OK because he stole from the rich to give to the poor (so the story goes).

So if murder can enter the hearts and minds of peoples around the world and be not only condoned but actively accepted and if murderers can become heroes, how are we going to judge Usama bin Laden, as a David or a Goliath?

How many of those who suffered the horrific events of 9/11 in New York had felt sympathy towards NORAID or even contributed towards the IRA campaign against innocent civilians in Britain, when almost weekly shards of glass were propelled through the stomachs and throats of men, women and children in shopping malls, pubs and clubs, offices...? How many of those who were screaming on 9/11 went out to cheer today at the news Usama bin Laden had been killed? How many of those dancing today in New York had derided the scenes of joy in certain cities in the Middle East at the news the USA had been struck?

However, as times change so do people and so do universal precepts of what is right and wrong. Not so long ago, Popes rode off on a horse into battle, Bishops fought in medieval armies with a club, Christians went on Crusades to fight the Infidel, and Moslems used to grant freedom of expression to captured Christians. Catholics murdered Protestants, far more Catholics were murdered by Protestants in Elizabeth I's reign in England than Protestants murdered by Catholics during the reign of her elder sister, Mary I.

If Usama bin Laden was the persona of the globalization of terror, then terrorism in particular and murder in general are no longer accepted or acceptable in any way, shape or form, especially not the indiscriminate slaughter of innocent civilians. True, what is the difference between a New Yorker or Londoner murdered by some crazed young misguided fanatic yelling Allahu Akhbar! and pressing two wires together, and an Afghan or Iraqi or Libyan citizen murdered by a pilot from 30,000 feet?

Neither of the acts are acceptable or condonable in today's world, although the victims of terrorism seem to think that two wrongs make a right. Had Usama bin Laden attacked only military targets, then his actions might have been more acceptable because those who enter the military sign a document in which they admit they are aware of the dangers they may face. Indeed, while he was fighting the Soviet Armed Forces in Afghanistan after the CIA launched a terrorist campaign to destroy the socially progressive regime in that country which had called the Soviets in to help, he was considered an ally, aided, armed and abetted.

However, his choice to attack not only military targets, but institutional and civilian ones as well, while such may have made him a hero a few centuries ago, turned him into a pariah in today's international community, more and more based upon mutual love, friendship and common values which respect debate and dialogue and discussion, the fundamental precepts of democracy.

Moreover, his hijacking of the noble religion and culture of Islam and the blasphemous introduction of vectors which twisted its message into one of conflict and hatred made him an enemy of the ideal he chose to expound. If Usama bin Laden was the personification of Wahhabism, his death, if confirmed, must surely be its end.