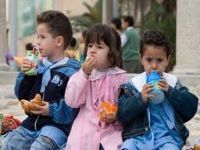 It is by now patently apparent that NATO will go to any depths to further its evil and inhuman objectives, including the murder of innocent civilians, even children, in its callous and cold-blooded terrorist strikes wholly against international law and outside the remit of the UNSC resolutions 1970 and 1973.

It no longer surprises one to see the depths to which NATO and its murderous clique of leaders will stoop, but the callous and cold-blooded precision-murder of children goes beyond the pale in any terms of human decency. That the NATO leaders can stand back and insinuate that command-and-control targets are legitimate, when the UNSC Military Committee has not given its approval and when it is evident that mission creep was always the objective, is a clear sign that they either misunderstand international law, or wilfully flout it.

The wording of Resolution 1973 (2011) clearly refers to the establishing of a no-fly zone. Why then is NATO bombing civilian institutions, such as a private home occasioning the death of Saif Al-Arab Al-Qathafi and allegedly three of Colonel Al-Qathafi's grandchildren? Why then is NATO targeting the Libyan Downs Syndrome center?

These precision attacks do not take place by chance. They are coordinated between the eye in the sky and information on the ground. In the case of Saturday night's attack on the house where Colonel Al-Qathafi's son was murdered along with the three children, the obvious target was the Colonel himself, who was visiting his family along with his wife.

What took place was a clear violation of international law, meaning that war crimes have been committed and those who ordered this campaign are war criminals, liable to prosecution for what they have done, and this now includes the cold-blooded murder of children.

The African Union, to which Colonel Al-Qathafi gave so much, is looking on from the sidelines, useless, impotent and cloaked in snivelling cowardice and pitiful self-interest. Where are Africa's leaders? Nowhere, where they will remain as the rest of the world takes up the cause in multiple initiatives which must insist on international law being followed and not flouted and which must conclude with the aggressors, those who are raping Africa and Africans, being locked out of the Continent for good.

Today there are other alternatives to Britain, France and the USA, namely the BRIC countries which tomorrow can include South Africa, Iran, Venezuela and Indonesia. These countries are set to help Africa, not destroy its infrastructures.

Finally, the propaganda campaign demonising Muammar Al-Qadhafi fools nobody. The Libyan authorities are fighting armed terrorists, not unarmed civilians, as it is patently obvious every time one turns on a television set.