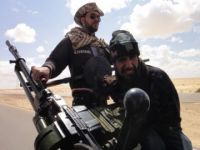 Proof: The "unarmed civilians", the darlings of Messrs. Obama, Cameron and Sarkozy, are Islamist terrorists. We present photographic evidence, films of a convoy of civilians, including women and children, being fired on by the Bearded Wonders of Benghazi and a peaceful pro-Gaddafy rally in Tripoli attacked by terrorist snipers.

Fact: The Libyan "unarmed civilians" attacked by Government forces are not civilians at all, but instead trained Islamist militants - terrorists and professional troublemakers mixed with CIA-trained operatives who have tried and failed to take power in Libya.

Fact: The leader of the rebels, one Abdel-Hakim al-Hasidi, was arrested in Pakistan for having links with Al-Qaeda, for fighting against NATO forces in Afghanistan, for recruiting operatives from Benghazi to fight against American and British forces in Afghanistan and in Iraq.

Fact: Muammar Al-Qathafi was to receive a UNO award for his excellent humanitarian record in March. How could he have become a bloodthirsty tyrant in the meantime? He is not fighting unarmed civilians, he is fighting armed Islamist militants.

Fact: Muammar Al-Qathafi has not stolen billions from his country. He has used very little money for his personal gain. The US-led alliance stole 30 billion USD from a bank account, money which was earmarked for African Union plans. Far from siphoning off money for himself, Muammar Al-Qathafi has been setting billions aside to help set up African institutions for Africans.

Fact: Muammar Al-Qathafi has cheesed a lot of Islamist fanatics off by referring to the veil as a tent, for speaking out against stoning of women and for demanding an end to the execution of homosexuals.

Fact: Muammar Al-Qathafi has dissed off a lot of western-based financiers by setting up independent institutions and services for Africans. For example, the communications programme which he financed (instead of siphoning off the money for himself) puts all Africans in touch with one another, for free, brings all Africans into connection with distance learning and tele-medicine programmes, whereas before the Africans had to pay 500 million USD a year for the use of western satellites.

It is the many projects like this, and other financial programmes which have freed Africans from the yolk of imperialist tyranny, but which have cost the western banking elite billions, which have rubbed the elitist cliques up the wrong way.

Fact: Obama, Sarkozy and Cameron face historically low popularity ratings, far below those of Muammar Al-Qathafi, in their own respective countries.

Does all of the above put their little "war" into context? Now, who are the "rebels" they support? The above-mentioned three, joined now by that other pariah, Berlusconi, fighting allegations of sexual abuse of minors, are spending hundreds of millions of dollars of their taxpayers' money on supporting pigs like al-Hasidi and his troupe of misfits, criminals, looney-toons and terrorists.

On Sunday, a peaceful convoy sent to speak openly with the citizens of Benghazi, including many women and children, was savagely strafed by the "unarmed civilians" near Bin Jawad. Watch the video:

That is not the end of it.

Child abuse: children have been sodomised by the Benghazi-based suicide bombers in Iraq, the ones now fighting against Colonel Al-Qathafi, trying to form an Islamist terrorist state at the gates of Europe. Boys and girls as young as eight years of age have fled Benghazi, telling stories of the most shocking physical and sexual abuse, having been raped in front of their families. Read the following extract from the British charity, Save the Children:

"Michael Mahrt, Save the Children's child protection adviser, said: "The reports of sexual violence against children are unconfirmed, but they are consistent and were repeated across the four camps we visited.

"Children told us they have witnessed horrendous scenes. Some said they saw their fathers murdered and mothers raped. They described things happening to other children, but they may have actually happened to them and they are just too upset to talk about it - it's a typical coping mechanism used by children who have suffered such abuse."..."

And now for a pro-Gaddafy peaceful rally in Tripoli attacked by terrorist snipers:

It would appear that the western bought media has the Libya story bottom-up, inside-out or upside-down, polite euphemisms for saying they have purposefully ass-ended it and turned it out as a propaganda story, once again to provide a public opinion base to support their disgusting deeds.

The western interference in Libya is fundamentally wrong and the people of the world must say Enough! It is time the West stopped breaching international law and stopped using lies to further its own selfish interests: in this case, raping this African nation of its resources, the first step to a closer hands-on approach towards this continent, to which Muammar Al-Qathafi tried to give a voice of its own.

Discuss this article on our forum: