Libya: Is NATO guilty of conspiracy to commit murder? 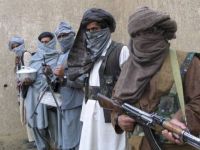 One thing is perfectly clear: NATO should not be in Libya for several reasons. However, now with the rumours that Predator aircraft are to be used to "take Gaddafy out" comes the threat of a clear violation of the law: in so doing, NATO and its leaders would be liable for conspiracy to commit murder.

NATO should not be in Libya for several reasons, the main one being that the hype about Colonel Gaddafy attacking his own poor innocent unarmed civilians is in a word, baloney. In another, Bullshit! The "poor unarmed civilians" are none other than the Benghazi-based terrorists Colonel Muammar Al-Qathafi refers to as "the bearded ones" and who he has infuriated time and time again with his derogatory references to the practices of Islamist fundamentalism.

One look at these machine-gun wielding "unarmed civilians" and we can see the truth behind these lines and the manipulation of the truth by a biased and bought western media, trying to create a causus belli where there is none.

Abdel-Hakim al-Hasidi, the commander of the Anti-Government forces in Libya (terrorists) is himself a convicted terrorist who has been arrested for fighting for Al-Qaeda against American and British forces in Afghanistan and has been connected with the recruiting of Benghazi-based suicide bombers in Iraq - again deployed against coalition troops. Why, then, has this not made the headlines in the bought media in the USA and its coalition allies and why are the leaders of the USA, UK, France and now Italy siding with terrorists?

Could it be to protect these unarmed civilians? Or could it be because of Libya's vast reserves of prime quality oil and its tremendously rich reserves of gold and currency? Whatever the case, there exists something called international law, and this is governed by UN Resolutions (in Libya's case) 1970 and 1973, neither of which allow for the support of rebel forces or any other in Libya with any kind of military equipment or training.

Why then are France and the UK doing exactly that in Benghazi and why then are weapons being smuggled in to the terrorist forces in Misrata? With the Libyan government forces pulling back, and declaring a ceasefire, it is obvious that the terrorist forces are not interested in peace and are serving as the lackeys for their colonial masters of tomorrow who will seize their country's resources and wealth and leave Libya as the world's poorest country - precisely where it was before Colonel Muammar Al-Qathafi turned it into the richest country in Africa in terms of human development indices.

And now, why are Predator drones being readied to murder the man who was about to receive a humanitarian award from the UNO in March? Is this not conspiracy to commit murder and are those responsible not liable for criminal prosecution? In today's world, if international law does not exist, then it is about time it did.