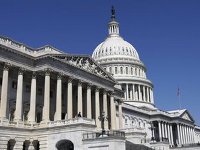 Government shutdown? America was treated to a faux spectacle recently.  The threatened apocalypse?  Government shutdown. It was a through-the-looking-glass threatened inversion of the magnificent, and similarly grandiose, fantasy of Ayn Rand in Atlas Shrugged (Now Playing At a Theater Near You) of a "General Strike by the Productive" and the ensuing collapse of civilization.

The federal government does a few genuinely useful things. It dispatches checks to bondholders and social security retirees. It provides for the care, feeding and arming of our warriors in and out of battle. It even has retained a few essential services. (Come in, Air Traffic Control. Hey! Wake up! And while you are at it, how are your vacuum-tube-based radar systems working out?)

Beyond certain nontrivial exceptions involving a tiny fraction of the federal workforce, shutdown of the federal government would probably amount to little more than an inconvenience. Really, what is one to make of a nation that employs more people in the U.S. Department of Agriculture than there are farmers?

In fact, most essential government services are not provided by the federal government but by municipal and state governments. If the federal government were to shut down traffic lights would still turn from green to red and back again; schools would remain open, as would fire, police and emergency medical services. A federal shutdown would not be catastrophic, not even close.

Except symbolically. Between the symbolism and the reality lies a ... psychodrama.

Our elected and senior appointed officials, the mainstream media and every progressive in good standing, attach a kind of presumption of nobility to government.  The idea of agencies shutting down, therefore, carries intonations of anarchy. Riots in the streets.  Burning cities. The Fall of Civilization.

But social cohesion, and the superb diffusion of powers set up by the Founders, make such a vision risible.  Law and order primarily come from a lawful, orderly citizenry. Commerce and culture are almost exclusively a function of enterprise, not government.  Liberty endures in spite, not because, of the government.

And yet even those who gripe about its excesses find something deeply magical to the word "government."  Our officials, by virtue of their election to office, become known, even after retirement (and under prevailing rules even after indictment and conviction) as The Honorable.

Many of my progressive, and even many of my politically apathetic, friends honestly, deeply and sincerely believe that the work that takes place inside these massive marble and sandstone edifices in Washington, and in federal buildings around the country, must be undertaken by people who are nobler, smarter and wiser than mere citizens.

Few have ever looked inside the box known as "the federal government."

There are many fine and conscientious people who work for the federal government.  That said, fine and noble people are by no means more numerous there than in the private sector. Yes, the civil service is based, in theory, on the merit system. This is a shining ideal of the original Progressive Era in which government agencies were rife with patronage and graft. The Merit System was designed to create a government meritocracy. Yet the Merit System, upon inspection, is terribly broken. There is a lot of evidence that a bureaucratic spoils system has supplanted the political spoils system.

Whether or not there is a flimsy pretense of "competitive service" protocols established for hiring there can be no question that job security protections are so convoluted that, as a practical matter, it is next to impossible to fire a career civil servant. This leads to a very mixed quality of workers - not to mention the enormous inertia one imagines from a system that protects the incompetent and only slightly, if at all, rewards the able.

There are very few meaningful rewards for exercising judgment and initiative inside the federal civil service. It's very much paint-by-number in there. The system was, in fact, designed to, and usually does, stifle imagination and initiative. Very few really brilliant civil servants, men like the father of the F-16, Col. John Boyd, or the visionary who brought about the Internet, J.C.R. Licklider, or the CIA's Afghan Task Force Chief Gust Avrakotos, achieve extraordinary things from within an agency. Very few indeed.

And yet, in the face of all the evidence to the contrary, most progressives believe - as an article of faith - that most GS-13s somehow are better adapted to promote the general welfare and secure the blessings of liberty to ourselves and our posterity than are mere citizens. As Ernest Hemingway concludes The Sun Also Rises, "Isn't it pretty to think so."  It takes a special kind of sweet naiveté to think so.  Ah, Faith!

Bless the hearts of all those in federal agencies fighting for Truth, Justice and the American Way. Yet really, dear progressive reader (if any), brace yourself: Civil servants are not superheroes. They are people like everybody else, no more, no less. It is the values that citizens bring to the government, not the values that the government brings to its citizens, which made, and again will make, America great.