The coming MidEast blood bath and the death of Turkey 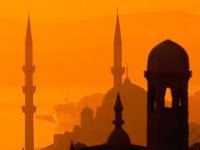 Prophesy has a way of coming true and its agents, at least those who set up the situation best, are usually the least aware of their actions.

In this, much as I predicted in , reality is crashing down on perception and the will of God, not the madness of Allah, is moving to prevail.

The Americans and the British, in their Masonic drive for domination, have back stabbed their allies in the Middle East, launching one revolution after another, in a bid to up the price of oil, to which they have brilliantly succeeded, and thus allow for the further mass printing of dollars, even as the value of the dollar has been rebounding. They did this by not only training the foolish youth and hiring or looking the other way as Islamic poured into these nations, but by triggering unrest first on a personal level, through the price of food and then, once this is underway, allowing the Islamic radicals to take over, while the Anglos and now also the new shills of Islam, the French, betrayed their allies or just simply attacked them, as in Libya and now in the Ivory Coast.

All of this has led now to Islamic radicals taking power in Egypt, while the Saudis have all but in name annexed Bahrain and are looking at doing the same to Yemen. With the Turks also going hard core Islamic, the stage is set. The last piece is Syria, which the Americans are busily destabilizing and already, through their media and senators, threatening with air strikes and invasion. What has been one of the first moves of the Muslim Brotherhood, which is not yet formerly recognized as the power of Egypt? To declare that if Israel attacks Gaza, from which daily hundreds of shells and rockets are falling on the Israelis, then Egypt will invade. This echoes the Turkish threat about the same situation with Hezbullah. So, everything is set.

At the same time, the US betrayal of Israel is complete. However, like it or not, 30% of the Israeli population is Russian Jews or Russians, most with duel citizenship.The biggest land owner is our Church and Russian tourists are the vast majority of those in Israel. We will get involved and our involvement will only grow to a full scale war as the S.Cypriots will seek to retake their northern half of the island and the Turks do what is in their blood and genocide the population. Photos of dead Kurdish women and children will only worsen the situation as will the war with the mainland Greeks, who will surely rush to help their brothers in Cyprus. Everything will escalate and as I wrote in "2011, The Dark Year Ahead":

Israel
The key player who will escalate this will be the Turks, with Erdagon dead set on a military confrontation. (I stand corrected as it may now be the Turks or the Egyptians). He will get it, first at sea and the air and then with Turkish soldiers coming into Lebanon. The war will quickly escalate, with Turkey's own unstable internal and external politics playing a direct roll.

Israel will take severe damage on its border areas, however, there will also be mass casualties in southern Lebanon and the Palestinian areas. Gaza will catch the worst of it and may see direct indiscriminate artillery barrages by the IDF. Surrounding Arab nations will be rocked by fanatic protests, when their governments do not get involved, which will also bring down extreme crack downs and blood baths on the radicals from various kings and dictators bent on staying in power and not bringing themselves into the meat grinder.

Russia, due to the Turkish involvement and that of the Greeks and Kurds, will come out as the main Israeli ally, coming firstly out against the Turks and then being drawn in against the rest of the Islamics. Yes, Russia will loose a lot of influence with the Islamic Arabs but will gain immensely with the Orthodox Christians and other Christian groups, as well as the Jews.

Turkey
Turkey, through the rulership of its Islamic fanatic, Erdagon, will finally walk into a real meat grinder. By sponsoring and supporting the Hezbullah war and then getting directly involved with fighting Israel, Turkey will also, in a defacto occupation of Lebanon, find itself fighting an Arab insurgency, sponsored by Syria. Taking advantage of this, the Kurds will launch various offensives throughout eastern and central Turkey. Drawn by these two conflicts, the Turks will also find themselves fighting for N.Cyprus as the Greek Cypriots will take the opportunity to throw out the Jihadist occupiers. The Turkish response will be beyond extreme, with heavy bombing of civilian points.

This in turn will draw in Greece and Bulgaria into direct conflict with the Turks, bringing in Russia as well. Turkey, its economy already in the gutter, will face a five front war and will readily collapse. The military will arrest and quickly execute most of the ruling party and cabinet and will conclude peace terms and withdrawals with the Israelis, Greeks, Bulgarians, Lebanese and Russians. There is a very good chance of the S.Cypriots gaining strong foot holds and territory in N.Cyprus. The Kurdish issue will be extremely hard to settle and will grind the Turks for the next decade to come. Greece will also gain several key islands along the border.

Deported Greek Muslims will create new headaches for the military.

Greece
Greece will have a year of collapse, war, turmoil and rebirth. First, the economic enslavement, placed upon it by the EU, even as the EU pours in Islamic settlers will spark bigger and uglier confrontations with a government and elite ever more powerless and inept. Further, the Israeli-Hezbullah/Turkish war which will bring in the Cypriots and thus Greece, will work to at least momentarily unify Greece. The military will come out as a unifying and apt leadership in a sea of anarchy and vain stupidity. The fact that Turkish Muslims as well as non-Turkish Muslims will agitate and act against Greece, will give Greece all the reasons to strike out at these national threats.

With the collapse of the Turkish war effort, the Greek General Staff, backed by the Church and with economic assurances from Russia, will seize power. The EUrocarts will be out raged and will attempt a quick over throw of the General Staff, through a colour revolution, lead by anarchists and Muslims. When this fails spectacularly, Greece will declare out of the Eurozone and will hold strained relations inside the EU at best. It will also oust the majority of Muslims who refuse to convert to Orthodox Christianity, sending them in drover to a wrecked Turkey. It will further expand its military and work in unison with Russia, thus also providing a land bridge to Serbia, which will also move towards a closer alliance with Russia.

Greece will see the beginnings of a revival in the Orthodox Faith and a growing movement of Monarchists.

These were my views back then, but I must admit that events have spiraled much further and faster then I originally thought. The Greek, Bulgarian and Serbian prophesies are moving at a much faster rate. This will not just be a serious scuffle, this will be the war of the Six Powers vs the One Power and the Turks will find final destruction with 1/3rd killed, 1/3rd expelled and 1/3rd converted to Christ. Of the One Power, it will of course be us, the Russians, with minor allies Greece, Cyprus, Israel, Serbia, Bulgaria and Armenia against the Six Powers: Turkey, America, Britain, Canada, France, Egypt. The Germans will not fall into this trap and neither are the Italians willing or stupid enough. They are quickly, as a front line European state, realizing what is their future if all the MidEast and N.Africa goes hard core Islamic. More than likely minor powers, such as Georgia, Azerbaijan, Albania, Bosnia, Belgium, will be involved. The Spanish and the Portuguese are to broke and wise to run into this stupidity, though the Poles and the Baltic states may be egoistic enough to start problems on our borders, even they are not that stupid.

Of the Six Powers, the American will throw some effort, in ship and planes and after taking casualties, will back off, as both sides will seek to keep fighting between the US and Russia from becoming a world war. To that end, Russia will more then likely dump the dollar and the US will nationalize Russian assets in the US, which Russia will do the same to the US and US companies. This in truth, the standard US move, will cause much more damage to the Americans, who still basically embargo Russian investment in the US. The bankrupt Americans and their British allies will pull back. David Cameron, already highly unpopular with a large segment of the population for cutting the very bloated government payrolls, which needs to happen, while splashing cash on his war mongering in Libya, which is utter stupidity, will face open revolt in the streets of London, one he will not be able to put down. The British government will fall and more than likely loose the Falklands to the Argentinians, at the same time.

France will follow suit, and the Canadians will just slink away. The war will really then become between the Islamics and the Orthodox and Jews. Georgia will be the only exception as that Orthodox nation will find itself in bed with its Islamic allies, unable to pull out and with Russian and Armenian forces crushing their weak army. Mass demonstrations will follow and hopefully Saakashvili will receive the Il Duce treatment.

The Egyptians will not be able to extend far enough to help the Turks and will face massive casualties and economic collapse from the Israelis who will be supplied by the Russians and Greeks. The Turks will face bombardment and after heavy fighting, Russian forces will take Constantinople. The Turkish state will rupture from there, with indigenous Kurds and Arabs attacking on the periphery while Russian and allied armies roll through. Mass refugees will poor into Iran, allowed through by the Kurds who will finally have their own state and will be more than happy to help the Turks expel themselves.

Thus will prophecy be complete and the Turkish plague, which came upon the Orthodox world some 900 years ago, be finally cleared and healed.

The article has been reprinted with the permission from the author and originally appears on his blog,