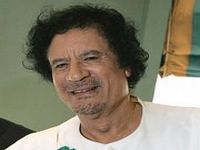 Thank you, Muammar Al-Qathafi. For the vast majority of human beings, time on this planet is an anonymous passage. They are born naked, leave nothing and die lying down. In your case, you have left a legacy and a philosophy of Governance which will serve as a beacon of light for thousands of generations. And you  refuse to lie down.

Thank you Muammar Al-Qathafi. I sincerely hope that you live among us for many years to come and that you weather this imperialistic storm, dampening the flames of religious extremism and terrorism, fanned by a clique of sickening protagonists who wish to rape Libya and Africa, whose murderous campaign is based around greed and lies.

Many of us in the international community saw this coming. They tried and failed in (where else?) Benghazi in the 1990s and have been itching for a second attempt. The "innocent civilians" they refer to are none other than the terrorists they have trained and into whose ranks the Benghazi Islamist extremists have flocked. They lied about Libyan bombing campaigns, they now lie about cluster bombs (why would your forces deploy cluster weaponry into areas they have to pass through?) and let us be honest, if a "regime" is turning "the full weight of its heavy weaponry" on unarmed civilians the death toll would thousands, not six. Lies and stupidity go hand in hand and the ones who believe in the nonsense being spread by the mainstream media are those sheep whose passage on Earth will remain anonymous, as indeed it should.

In your case, Muammar Al-Qathafi, your passage among us will never be anonymous and you will be remembered for generations to come, thousands of years in the future, as a man who showed us a Third Option and who has left a written legacy which should be fundamental and compulsory reading for every primary school student. It is a manual of Governance for a perfect society.

Your Green Book is not a Utopic treatise but indeed the blueprint behind what you successfully implemented in your country, which was the poorest in the world when you received it and which you have transformed into the richest in Africa in terms of human development indices. For this you will be remembered.

You will be remembered for providing a social model which answers the needs of Humankind, taking into account the need for an umbrella State and also introducing the vector to reward human endeavour. Decades ago you saw through the weak points in the Socialist Model and the Capitalist Model and gave us a Third Way.

You will be remembered for your Third Universal Theory providing a manual of economic government which you successfully introduced into your country. Your enemies - they are few but powerful - whatever the result of today's debacle, will be remembered as the self-seeking protagonists they are. Within a single decade, they will be seen as the failures that are and their entry into the annals of history may be a few lines, maybe less and they will have contributed absolutely nothing whatsoever towards the future of humanity. Nothing.

You will be remembered for your political, economic and social axes of your Third Universal Theory which is truly universal and will, I have no doubt, provide a model of Governance for this Planet and all those discovered in the Cosmos in the millennia to come. For this, Muammar Al-Qathafi, you will be remembered.

Yet your work did not end in Libya and with your people. After freeing thousands from the tyranny of colonialist practices and the humiliating yolk of Imperialism, you exported your ideas and ideals, benefiting not just a few cronies (like your enemies do) but directly affecting and building institutions for hundreds of millions of people across Africa. That is why Africans call you the King of Kings.

The media controlled by your enemies are certainly not ignorant of the facts I am about to refer to but for sure they will never mention them. You will be remembered for your pioneering work in the African Continent - it was you who gave Africa the possibility to connect all countries and cities - and rural areas - in a vast telecommunications project facilitating distance learning, telemedicine and so on.

So nobody is fooled by the lies of your enemies. Hoping you will remain among us for many more years, understanding that nobody is eternal, and respecting your tremendous legacy...

In the name of thousands of millions of human beings, here today or to come tomorrow, thank you, from the bottom of our hearts.