Libya: Where William Hague got it wrong 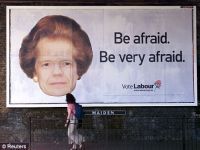 William Hague. A conceited, self-opinionated and arrogant wannabe politician so typical of little men with little lives, whose only claim to fame is to have got it so monumentally wrong about Libya and to have sided with terrorists who fought against British troops for Al-Qaeda. Just who the Hell is this freak to say Gaddafi must go?

William Hague, a failed politician fighting his corner in perhaps the most hated government in British history using Libya as an excuse to turn the attention away from the disastrous social policies of his party which ruined his country in the 1980s and early 1990s - reveals himself today as an abject failure as a Foreign Secretary, arguably the worst insult to British and world diplomacy in the annals of history.

Like all little men, William Hague is a protagonist, eternally searching for a front to hide behind, an excuse for his sad little existence and a cover for the extreme unpopularity of his Tory party. And like all protagonists, William Hague has jumped the gun.

Time after time after time, that whiny, tinny little voice on TV, that self-righteous tone of the British northerner-cum-toff (it never quite comes off, does it?), claiming that "Gaddafi" used weapons against innocent civilians, that NATO is there to defend civilians against a "dictator" and that "Gaddafi must go". Now just who the Hell is this...freak...to say anyone should go, in their own country? What kind of imperialist arrogance is that, coming from this apology for a man?

Colonel Gaddafi never attacked innocent civilians - he is fighting against Al Qaeda terrorists controlled by a criminal who recruited the same Benghazi fanatics to fight against British troops in Iraq and to kill British soldiers in Afghanistan. One wonders whether William Hague, the traitor, would dare to show his featureless face and bald pate in the market town of Wootton Bassett, where the bodies of British servicemen are repatriated after arriving at RAF Lyneham air base. 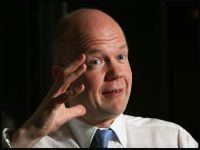 I invite him to walk around Wootton Bassett with a placard stating "I am supporting the Islamist fundamentalist terrorists from Benghazi, the ones who hate Colonel Gaddafi because he spoke out against stoning women and killing men for being homosexuals, and for calling the Moslem veil a tent, the ones who yell Allahu Akhbar like their British-hating friends in Afghanistan and who were recruited there to fight against our troops". That is precisely what William Hague is doing and anything he states to the contrary is a pig-faced lie.

Here is their Foreign Secretary, a traitor, lying about a causus belli, failing to see that the Libyan authorities are as hugely popular in most of the country as they have been successful in fighting against the Benghazi terrorists and foreign mercenaries drafted in to cause havoc across the country, now thankfully confined to Misrata and the far East. Here is their Foreign Secretary taking the side of Al Qaeda terrorists and aiding and abetting exactly the same elements who have fought against and killed British troops elsewhere.

William Hague is, in a word, a traitor. While his aircraft carry out missions supporting Islamist terrorists in Libya, wasting up to 50,000 pounds per hour per aircraft, the people of his country tighten their belts. If he had not jumped the gun, the "rebellion" would long ago have been put down in Libya, which would now be living in peace and the traitors who took up arms against the Government would have been liquidated, punished or pardoned.

What he has done is to involve his armed forces in a battle which is already lost, in a fight which is wrong. He has taken the wrong side and painted himself into a corner, his desperate plight now getting other NATO countries to shoulder some of the cost because his darling terrorist rebels are losing the battle.

If anyone should go, it is William Hague, the traitor who supports the sworn enemies of his own people, who supports Al Qaeda terrorists against a sovereign government and who wastes millions of pounds of his taxpayers' money on taking sides in a battle which has nothing to do with him. Who the Hell is this freak to say Colonel Gaddafi must go. Why? For fighting against Islamist terrorists? 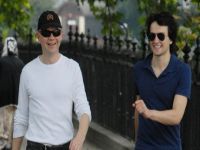 Next time around, maybe William Hague should lock himself in a hotel room with a, er..."special advisor" (third picture) and get some of it out of his system before inflicting himself and his pent-up closeted frustrations on the international community. What is it with these British politicians?

NB Opinion pieces do not necessarily represent the views of Pravda.Ru